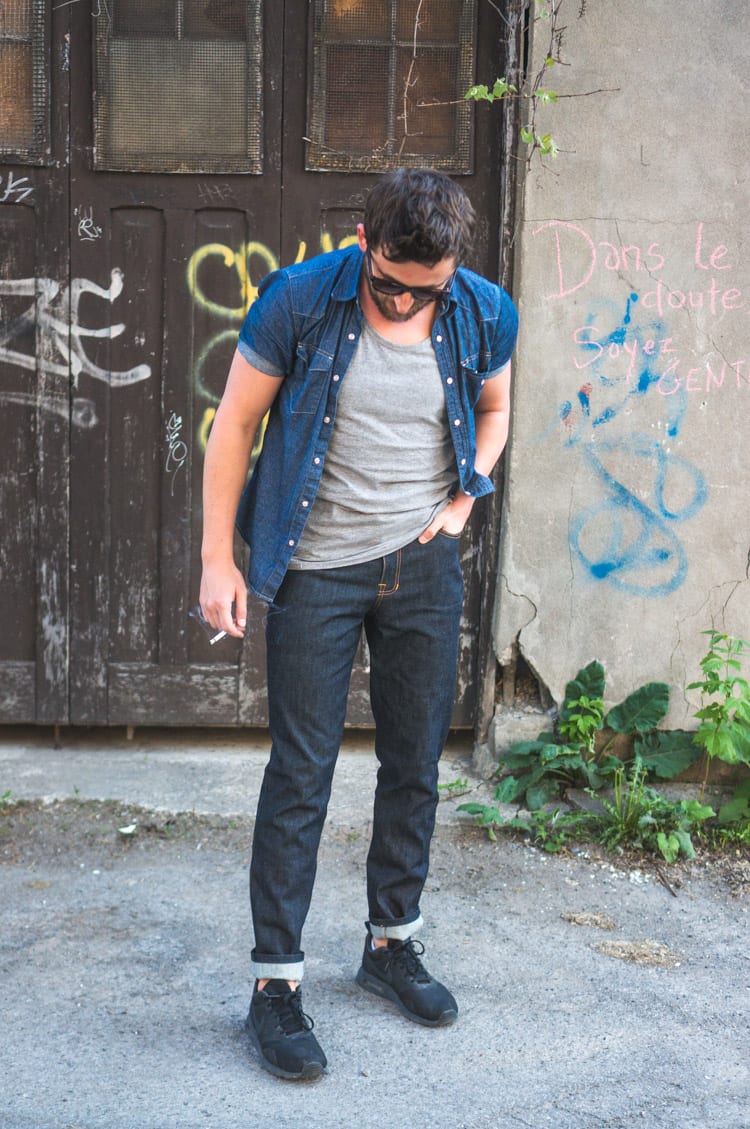 Warning: a smokin’ Frenchman is coming your way. Literally, he lit up a dart when I pulled out my camera to take pictures of his new jeans so pardon the French New Wave cliches coming your way (it’s a minor miracle that I finally managed to quit my social smoking habit after a few years with this walking advertisement for cigarettes, but I FINALLY DID IT SO YAY FOR MY LUNGS!)

After my post last week about the breathtaking sweater my aunt knit for me, it’s probably appropriate that I share some of the (rare) unselfish sewing I’ve done this year. These jeans have actually been over a year in the making. Last Christmas I tried to surprise him with a handmade pair, but they turned out to be comically too small (never casually ask your male partner what pant size they are and then expect that to be a useful metric for making them anything, FYI). 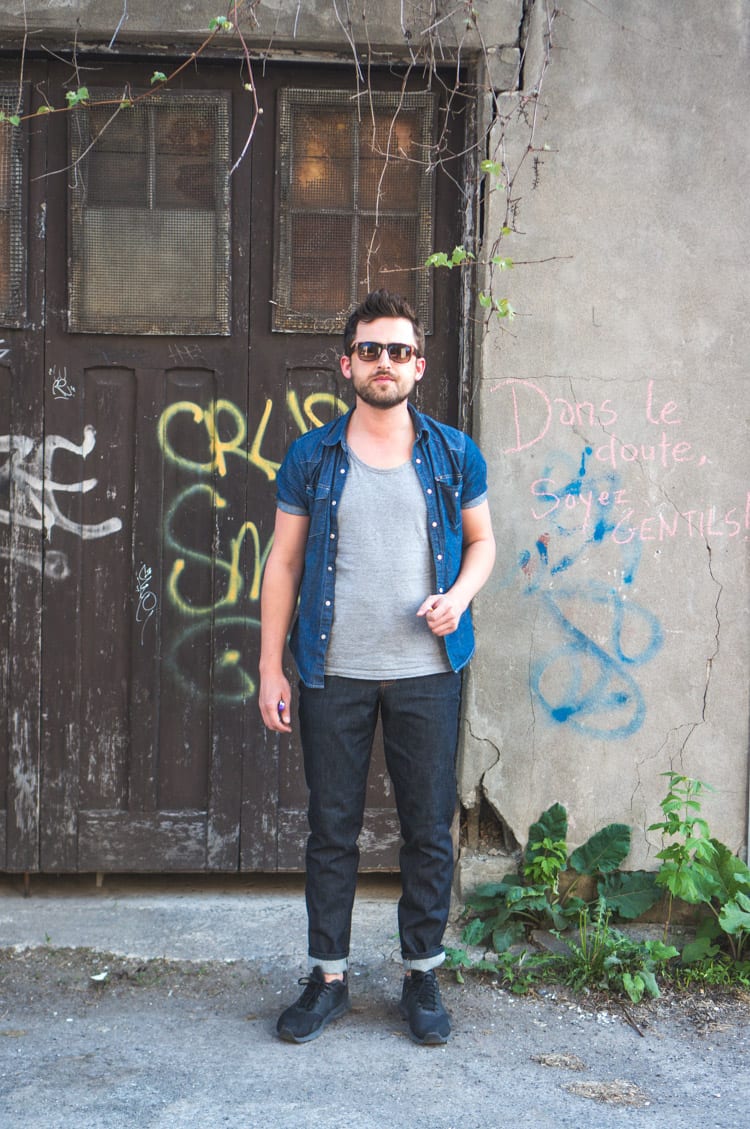 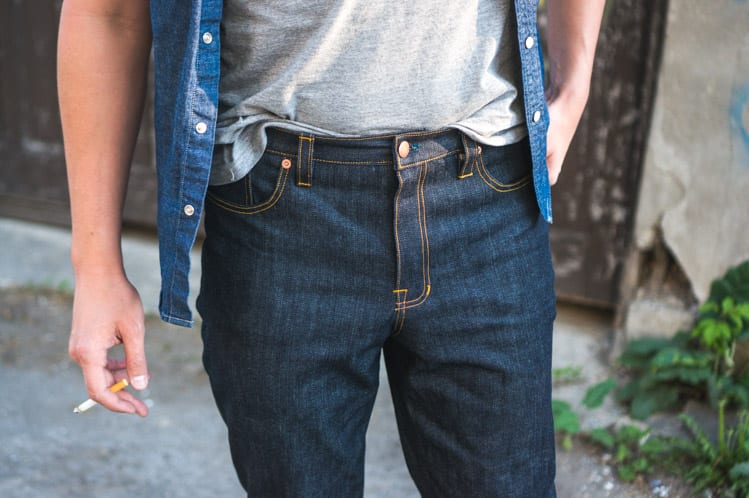 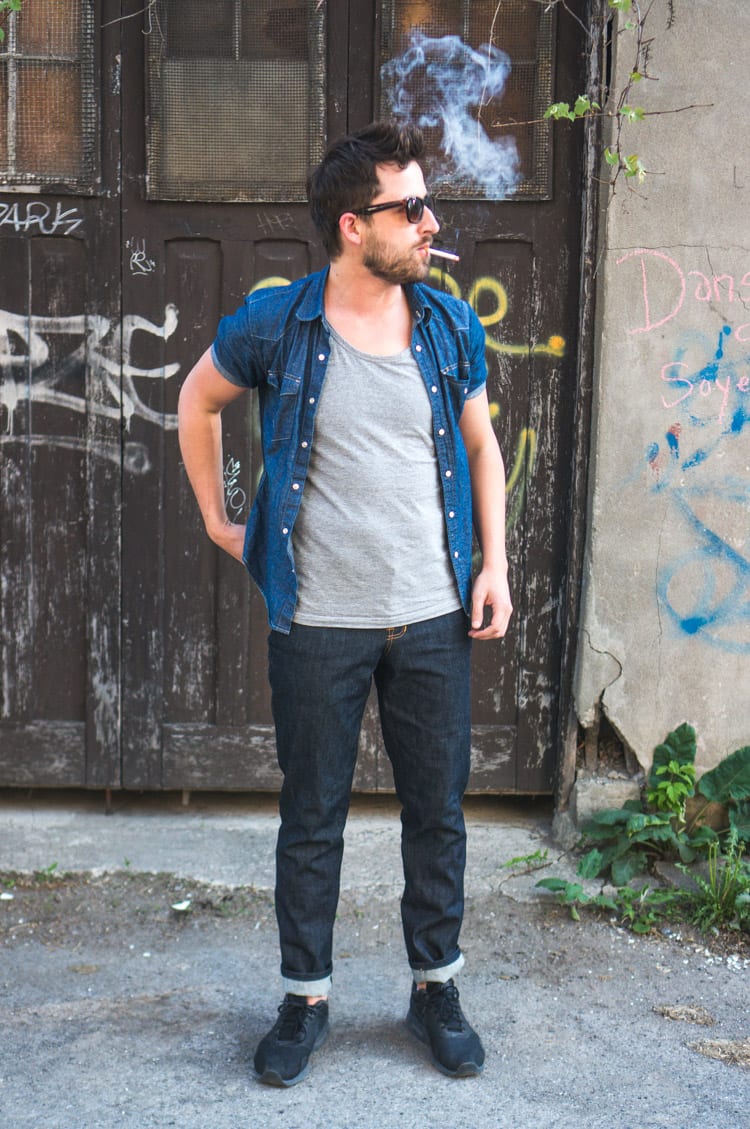 He has been fixated on a pair of custom overalls for some reason, and keeps nagging me to make him some; because the mental image of a full grown non-farmer man in overalls makes me giggle uncontrollably, I compromised with a new pair of jeans. This time around he knew it was in the works, and I took proper measurements and even made a muslin.

Since there are so few men’s patterns on the market, I was very happy to use the Jedediah pattern from Thread Theory. While the draft is for a classic chino pant, it was very easy to modify them into jeans by changing the slanted pocket on the front leg into the typical jean pocket opening, and then modifying the pocket facing accordingly. I cut a straight 36, and while the fit was perfect through the waist, I had to make a few alterations to the leg. We found them to be quite “hippy” on him, so I took out quite a lot through the hip, and then about 1/2″ through the entire side seam to make them more of a skinny jean. 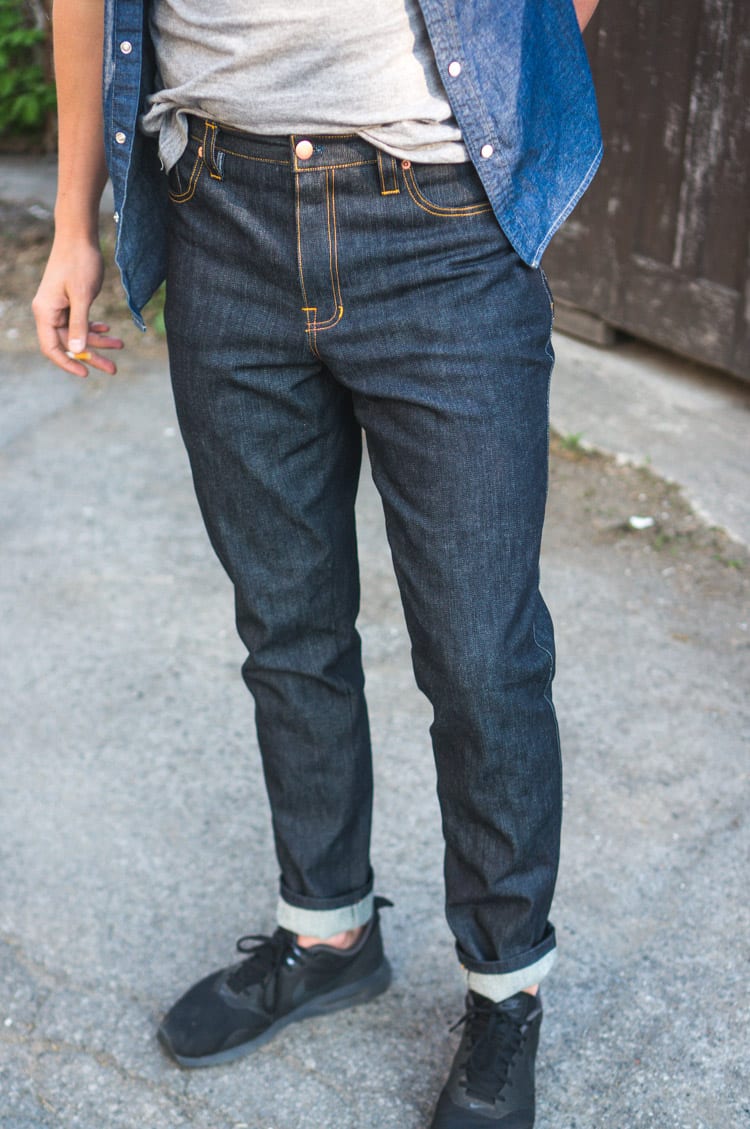 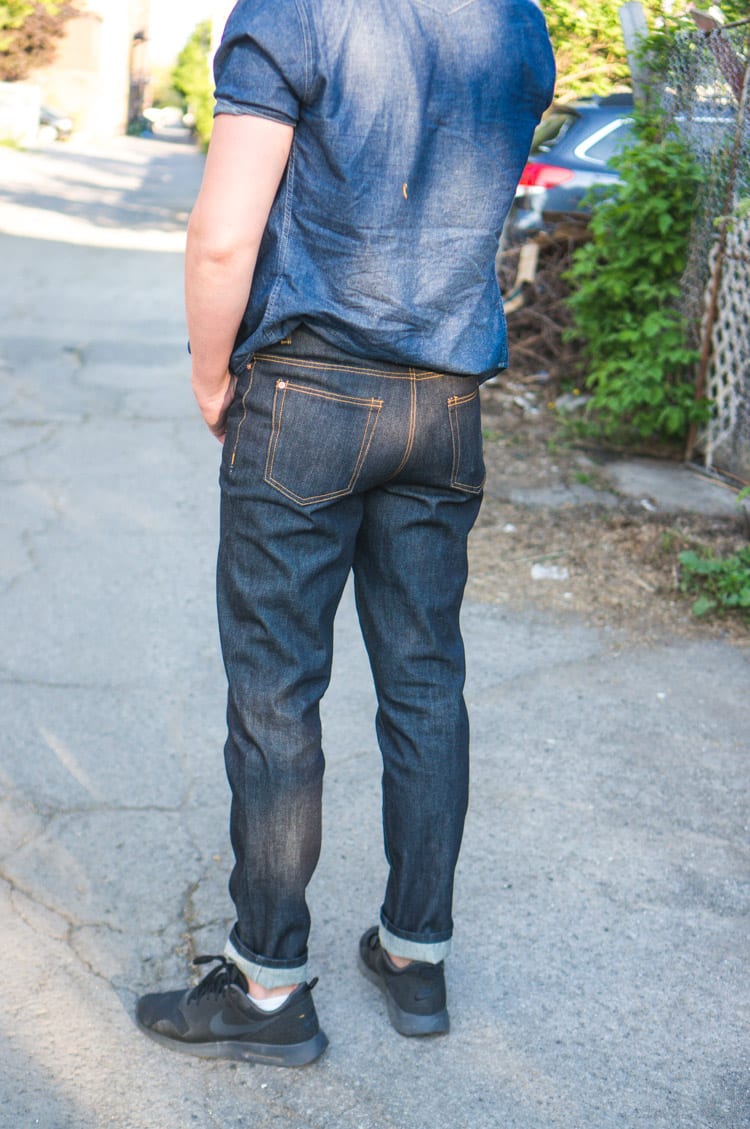 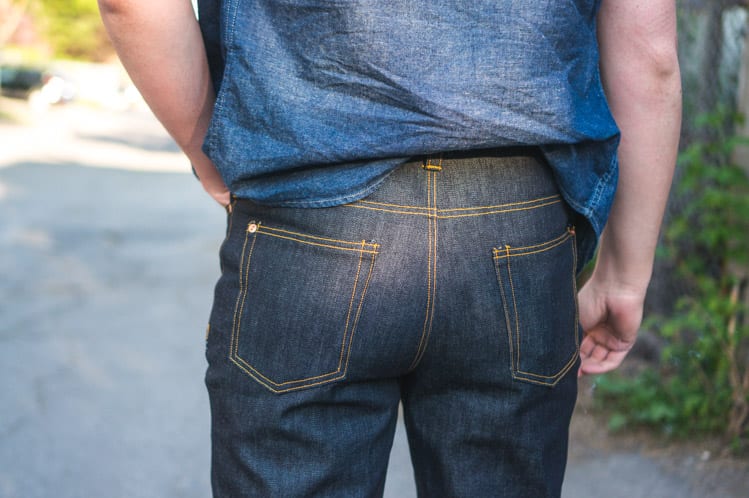 I’m quite happy with the overall fit, although I would sew the pockets slightly closer together next time. I would also like to experiment with taking more out through the back thigh since he’s used to wearing a slimmer cut jean. I also totally skipped the fly front instructions in lieu of my personal method, which I demonstrated to my Ginger Jeans class at the workroom in Toronto a  few weeks ago.

The denim was one of the Cone Mill options I was auditioning for our last kit that didn’t make the final cut. I wanted to make him a pair of “raw” jeans so I didn’t wash the denim before cutting and sewing it together, hence how crisp it appears in photos. However, it will soften up considerably over time, and if he doesn’t wash them for a few months, they’ll start to show the natural fade that comes when you really break in a pair of raw jeans. I’m excited to document the changes!

I let G pick out the topstitching thread and hardware, and he went with the copper finish from the fly front kits for sale in our shop. I have to say, I am in love with my rivets. They are far and away the best quality I’ve found so far, and unlike stuff I’ve used in the past, the post never breaks through the rivet cap when I install them at home on my mini anvil (this used to happen ALL the time; must be a different grade of metal).

The little “One of a Kind” labels are from Sewaholic. I keep meaning to make some to sell in the shop but haven’t settled on a label company yet (or maybe because I just can’t get “Hand F*cking Made” out of my head as a possible label option). 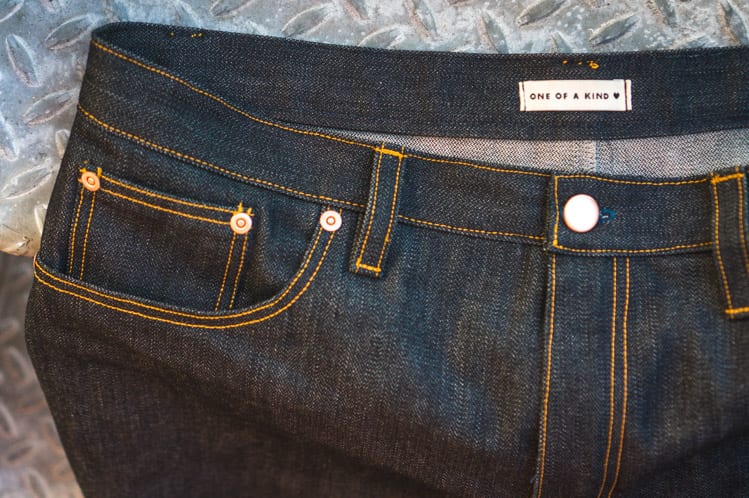 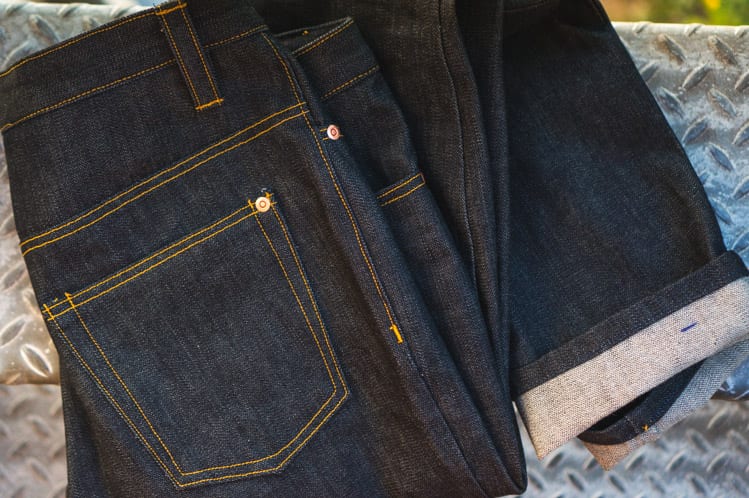 Guillaume has been my blog photographer for the last few years and is well acquainted with some of my tried an true outfit poses. This is him showing me how its done: 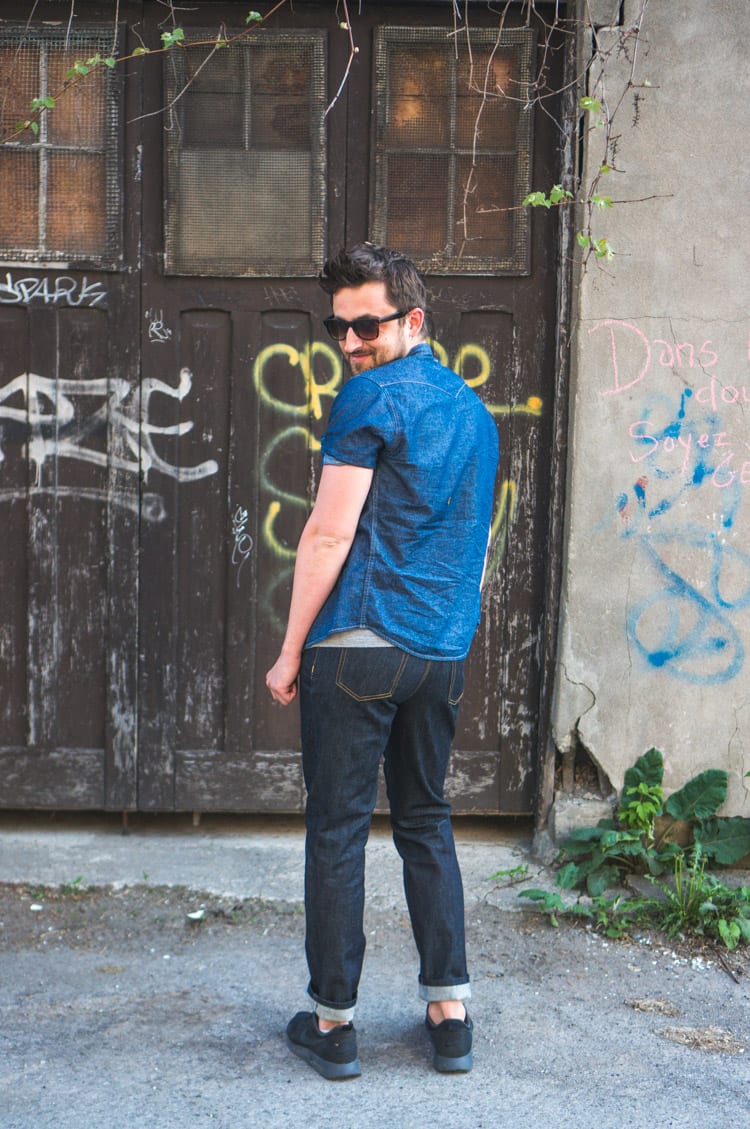 In the end, my demanding customer was very happy with his new jeans (especially now that his APC pair have finally disintegrated at the crotch despite my many attempts at mending them), even if they aren’t the overalls he dreamed of. Now hopefully he’ll leave me alone for a while so I can get back to sewing for myself.

Have you ever made anything for your partner? How did it go?