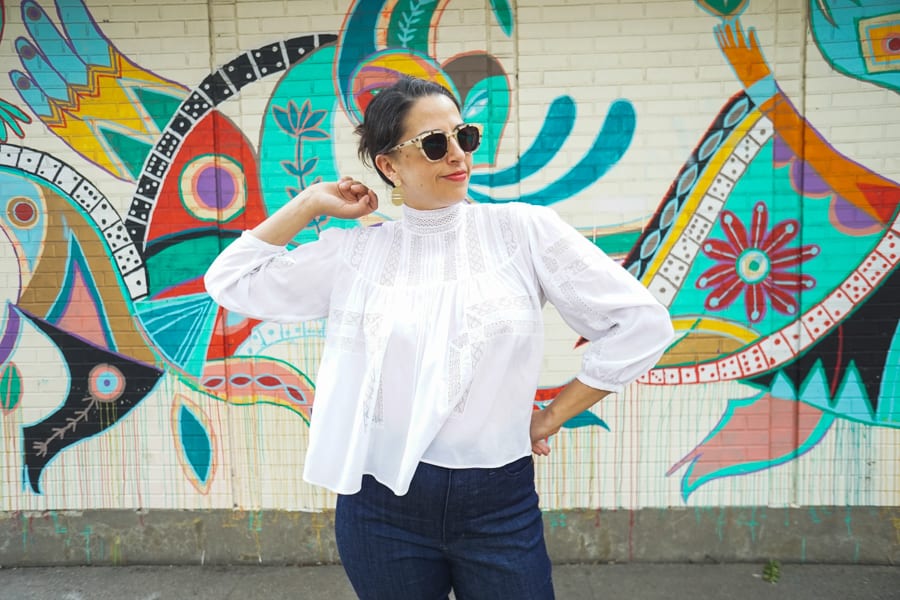 Looking back over most of my sewing projects from the past year or so, it’s pretty clear I’m still on a Frosting kick. When I’m not testing our own patterns and feel like tucking into something at home, I’ve been gravitating towards more “frivolous” (read: fun) makes; projects that let me really sink my teeth in, learn some new techniques or practice fitting. I have a closet full of highly practical clothes and I’ve filled in most of the gaps over the years, so it makes sense that when I do have a few hours to spare I’m more interested in focusing on something more challenging (and perhaps less functional in my day to day life). I’m suddenly getting why so many super skilled sewists start doing historical cosplay – if you want to make something but don’t particularly *need* anything, why not lose yourself in some detailed, time-intensive historical sewing?

Enter the Gibson Girl Blouse from Folkwear Patterns. I fell in love with this pattern when I saw Sallie’s take on it a few years ago on the Mood Sewing Network. We spent a few days together in March in Austin, and after seeing how beautiful it was in real life, I decided to pull the classic sewing BFF move by copying it exactly. Thankfully Sallie was on board and gave me the scoop on how to make it happen. 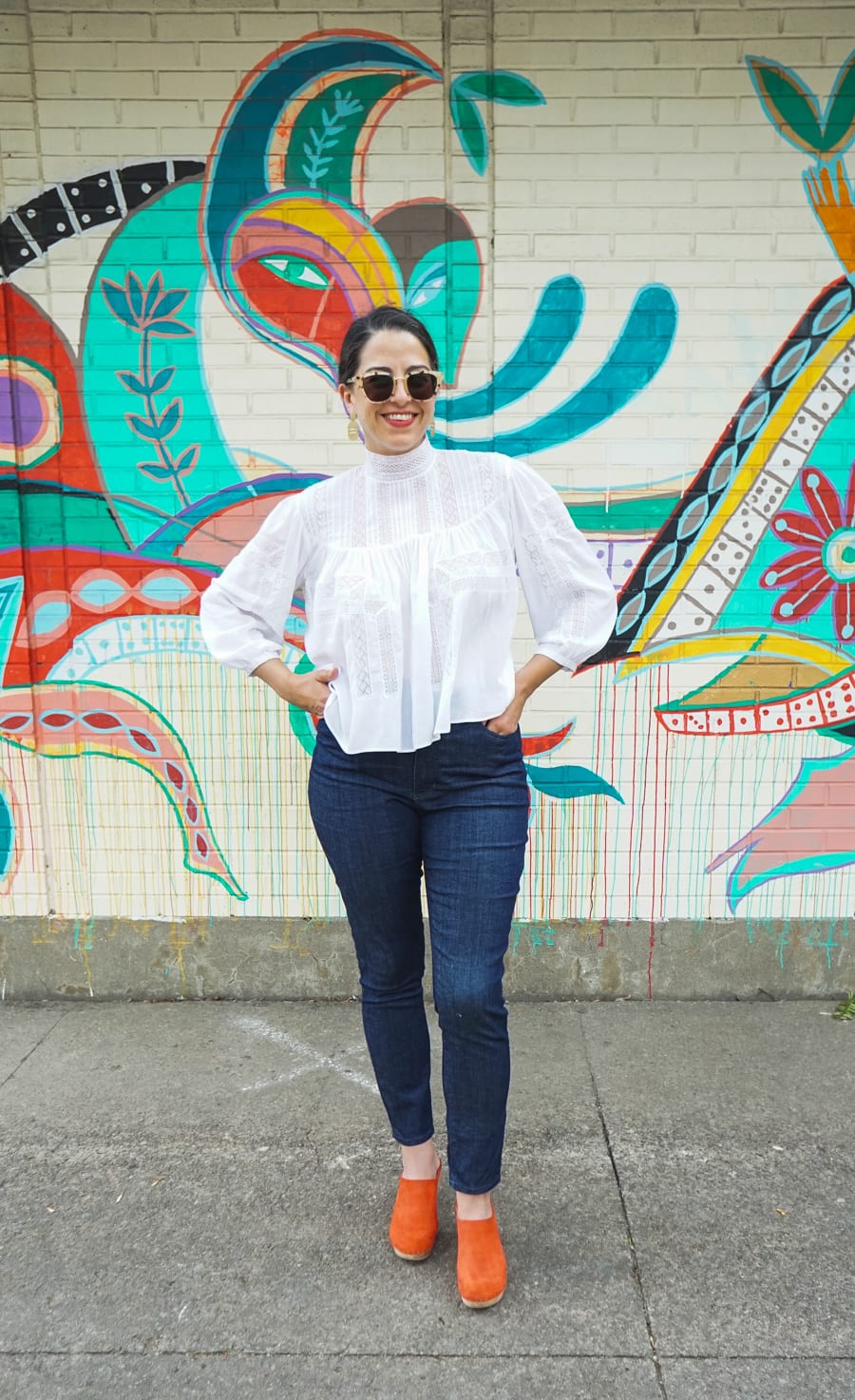 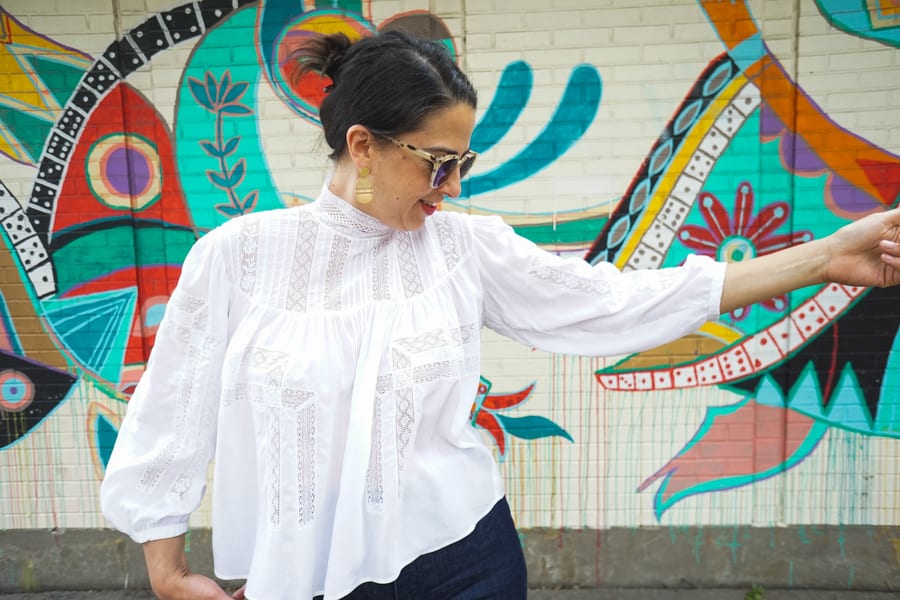 Let’s start with the pattern. Folkwear Patterns is one of the first independent pattern brands and have loads of gorgeous historical and cultural patterns to choose from. The Gibson Girl Blouse is a beautiful Victorian-style blouse with a high collar, loose fit and puffed sleeves (you better believe I rewatched Anne of Green Gables while working on this. Megan Follows is my queen). I think this pattern originally launched in the late 70s – you know a design has longevity when you can still buy it on the internet nearly 40 years later! (I also picked up the Russian Settler’s dress, since I’m hoping to recreate one of the beautiful nightgowns from the best film I’ve seen in years, The Favourite.) 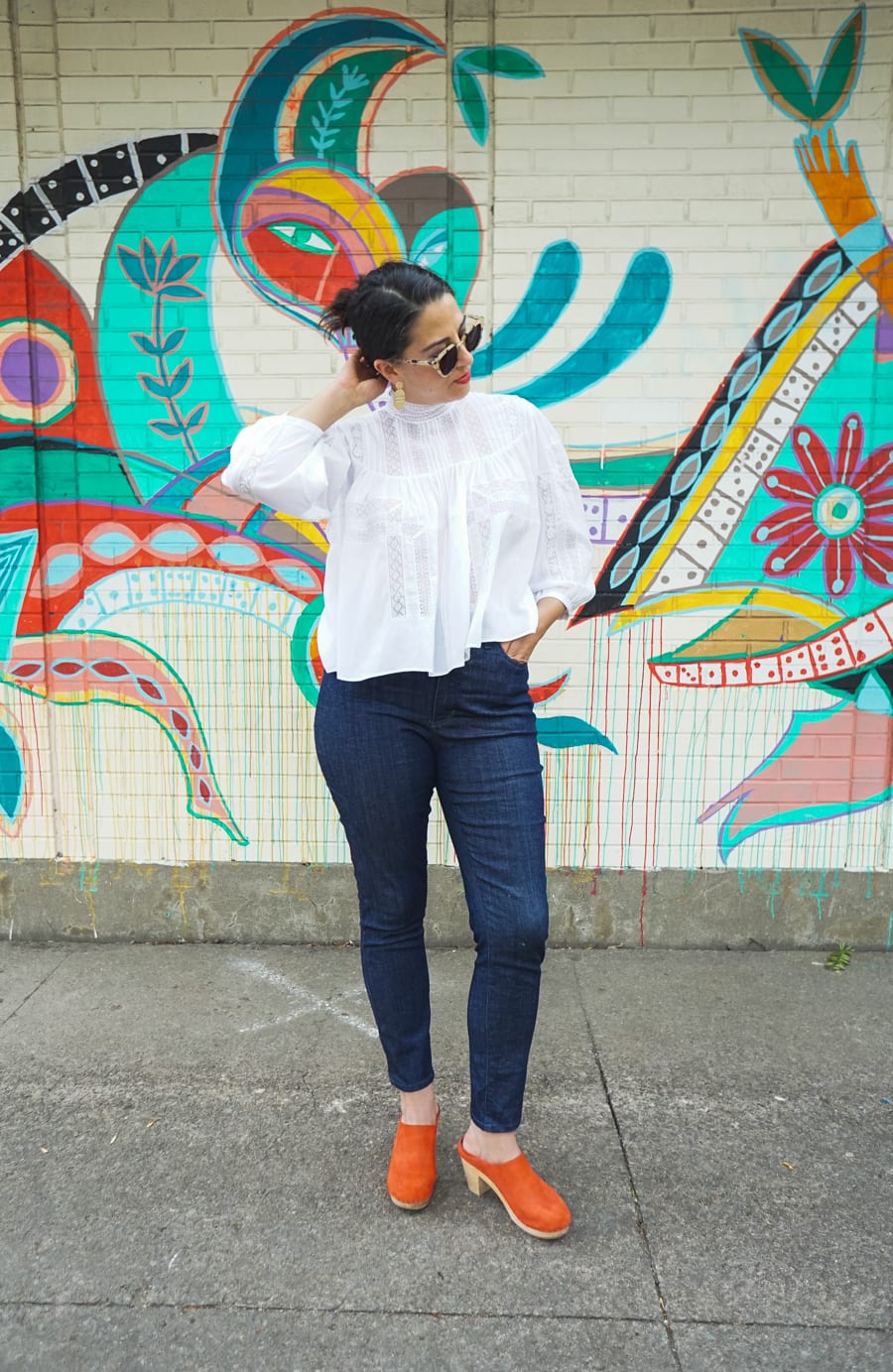 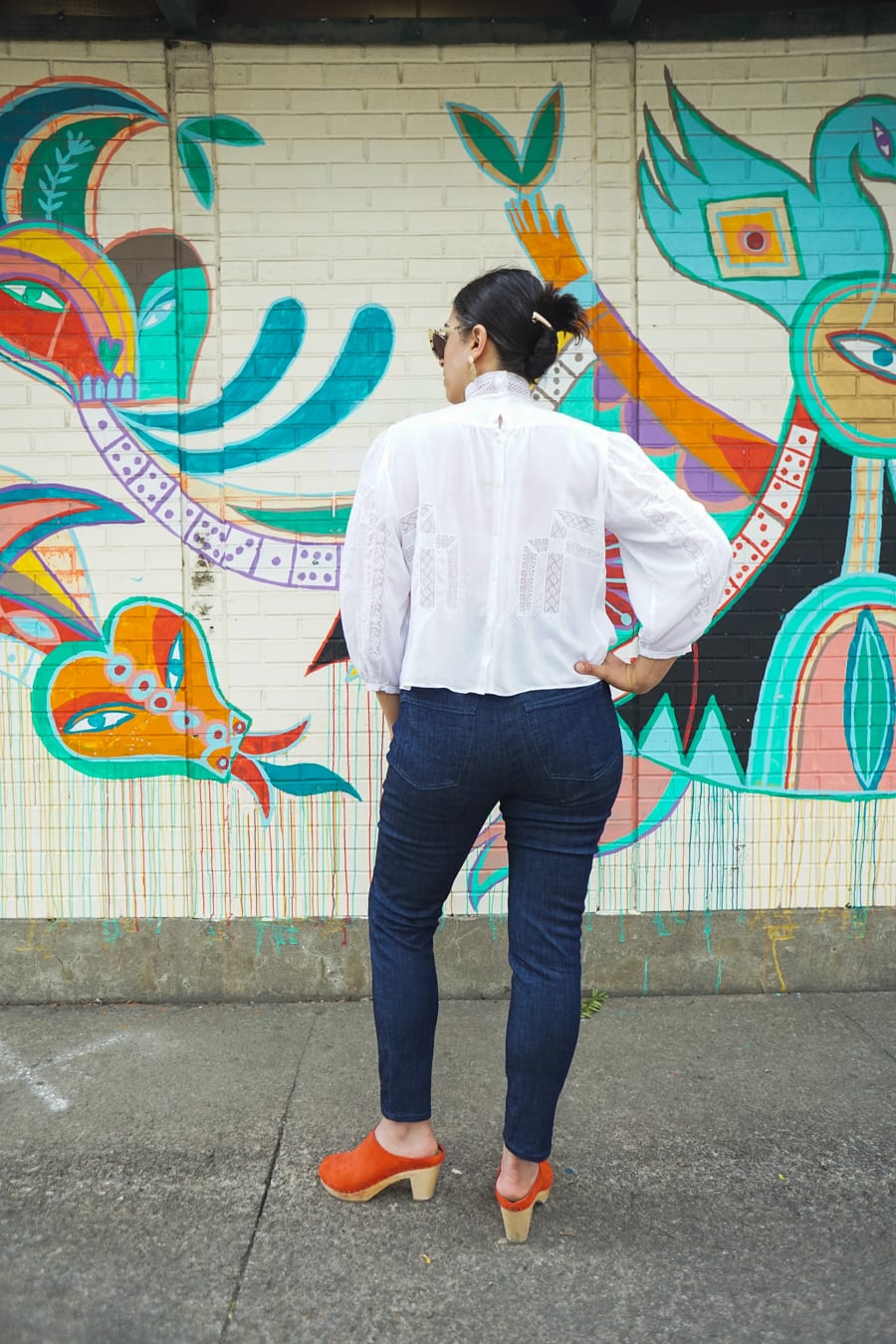 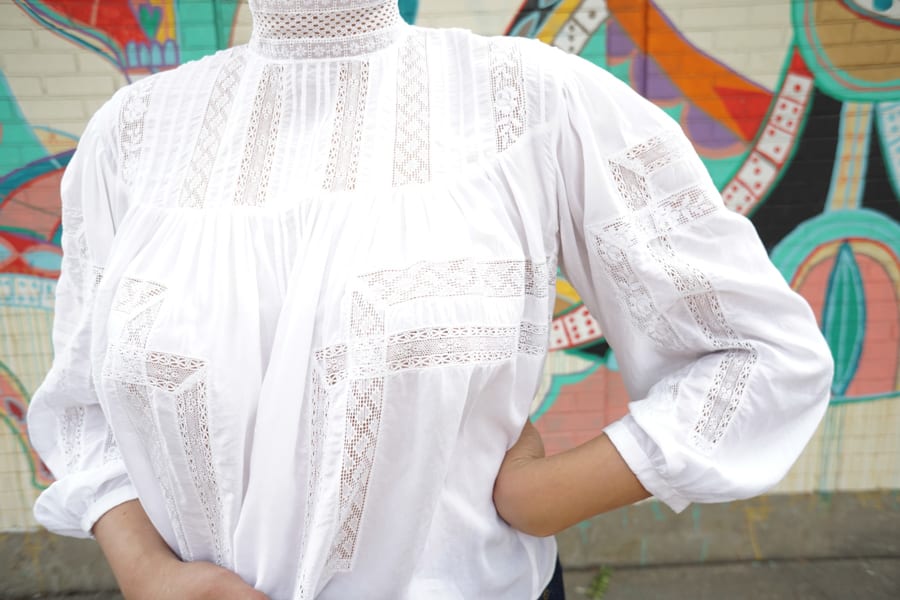 I’ve actually been hunting for a pretty vintage Victorian blouse for years, but I can never find one that fits or isn’t falling apart. Making one only made sense, especially if it meant learning some historical sewing techniques. This pattern is designed to be used with lace insertion, a process I quickly fell in love with. It’s time and labour intensive, but the finished result is so beautiful. I don’t generally associate the Victorian period with sex appeal, but there is something so romantic and seductive about the mysterious glimpse of skin you see with cut away lace.

For this pattern, the lace was inserted two ways. For the yoke, I made a wide, rectangular panel first, and then cut the yoke out after the pintucks and lace were inserted. For the sleeves and front and back, I cut the pattern piece out and then inserted the lace. The process requires some precision since you want the lace to lay flat along the grainline, so I spent quite a bit of time pinning it into place and making sure everything was straight before sewing anything down (especially important along the side seams where the lace meets). Once it was pinned, I used a tiny zig zag stitch along the perimeter of the lace on the right side to secure it in place, and then used tiny, sharp scissors to cut the fabric away on the wrong side. After pressing each cut edge over the first seam, I then zig zagged that seam in place and trimmed down the remaining seam allowance. If you’d like more info on this technique, Wearing History has a great tutorial on the process. 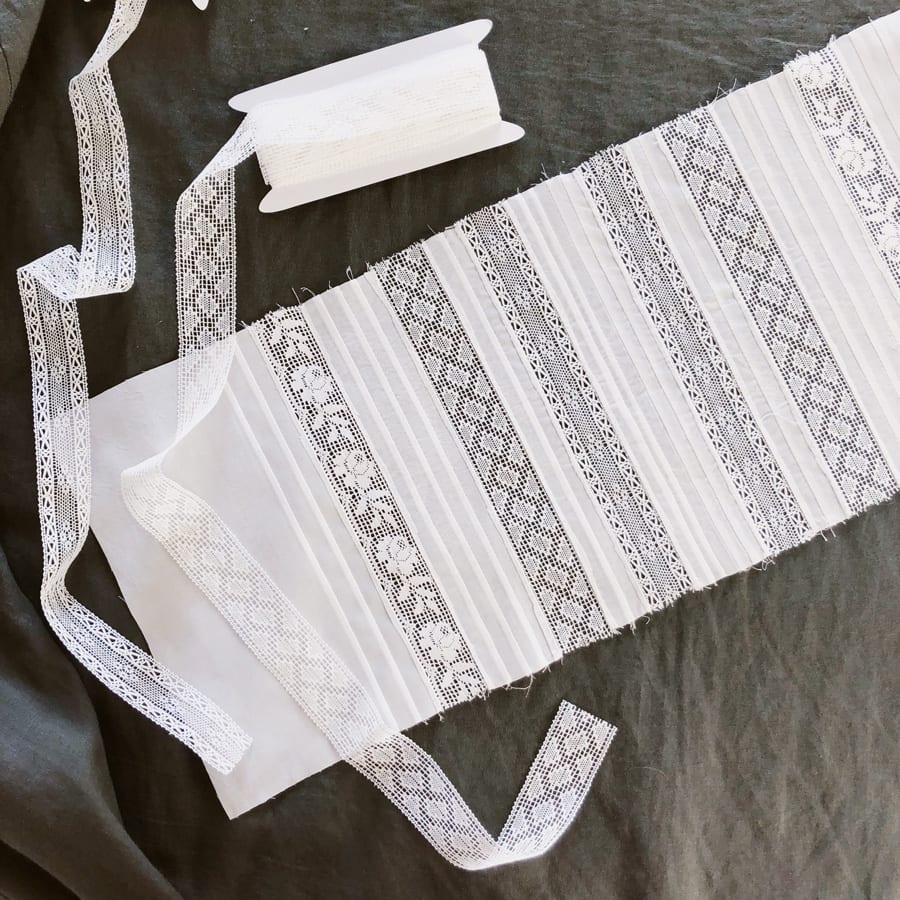 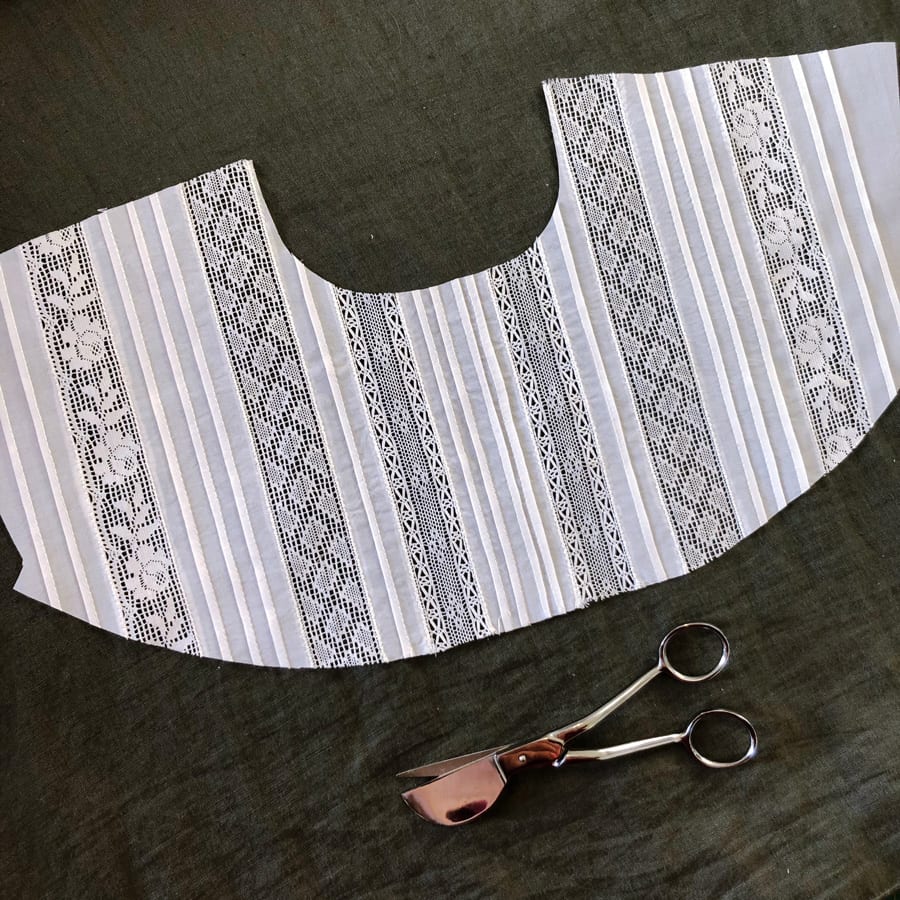 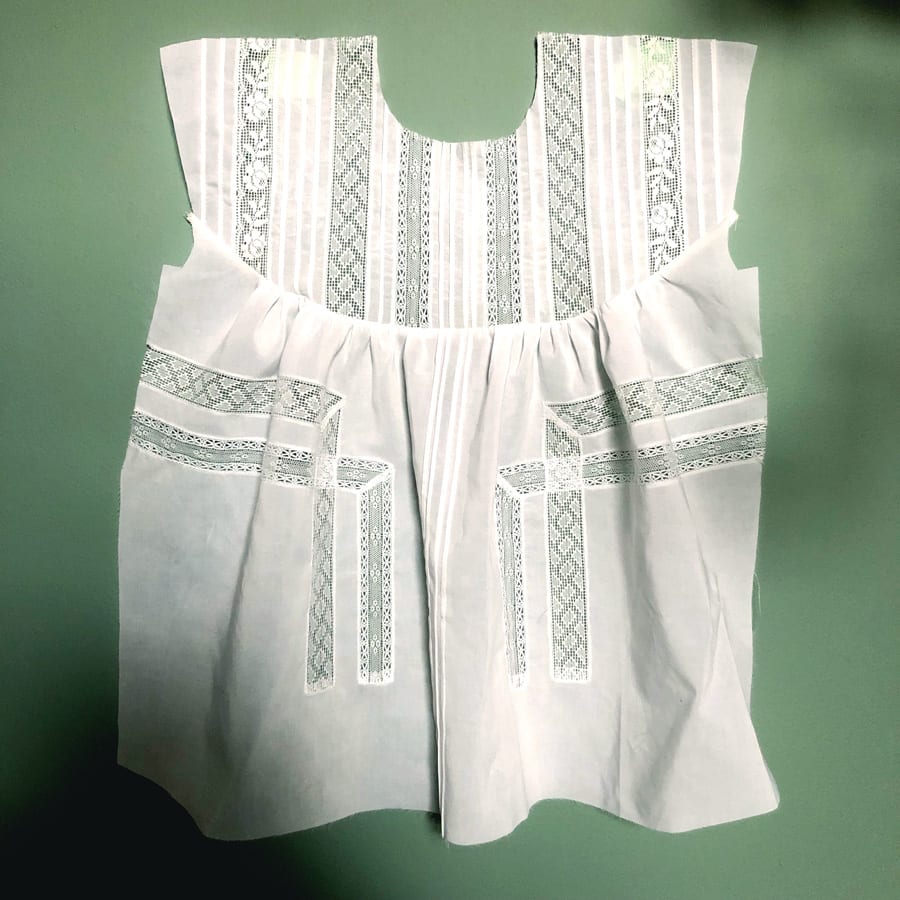 I wanted a loose, flowing top so I chose a lightweight viscose batiste from Stonemountain & Daughters. This fabric is quite drapey, which would have made the lace insertion a nightmare (a warning I got from Sallie). To stabilize and stiffen the fabric, I decided to starch it using a cornstarch and water mix. Originally I tried making this spray starch but found it difficult to coat the fabric evenly, so I diluted it with water and soaked the entire yardage. Once it was gently squeezed out (I rolled it in a towel to remove as much moisture as possible), I then hung it on the line outside, trying to keep the grainline of the fabric as straight as possible. In hindsight, I wish I had down it inside on my shower rod since the clothespin distorted the fabric in several spots. The starch makes the fabric as crisp as paper, so it’s critical you don’t skew the grainline in this process since you won’t be able to straighten it out once it’s dried. Once the fabric was dry, I then cut out my pieces. It was a bit of an annoying extra step, but it made the lace insertion SO much easier since the fabric was very stable. I made sure to keep the iron temperature fairly low since I was concerned about scorching the starch.

As for the lace, I went with a variety of cotton trimmings from Mood based on Sallie’s recommendation (I went with this, this, this and this for the collar). My biggest mistake was not pretreating the lace tape before I started since it definitely shrunk once I rinsed the spray starch out of the finished garment. I had to do some serious stretching and manipulation to get the garment to lay relatively flat after I washed it; you can see the shrinkage where the fabric is rippling, especially on the sleeves. I almost bawled my eyes out when this happened but it’s definitely still wearable, even if I’m a little scared to wash it again. Lesson learned: PRETREAT EVERYTHING. 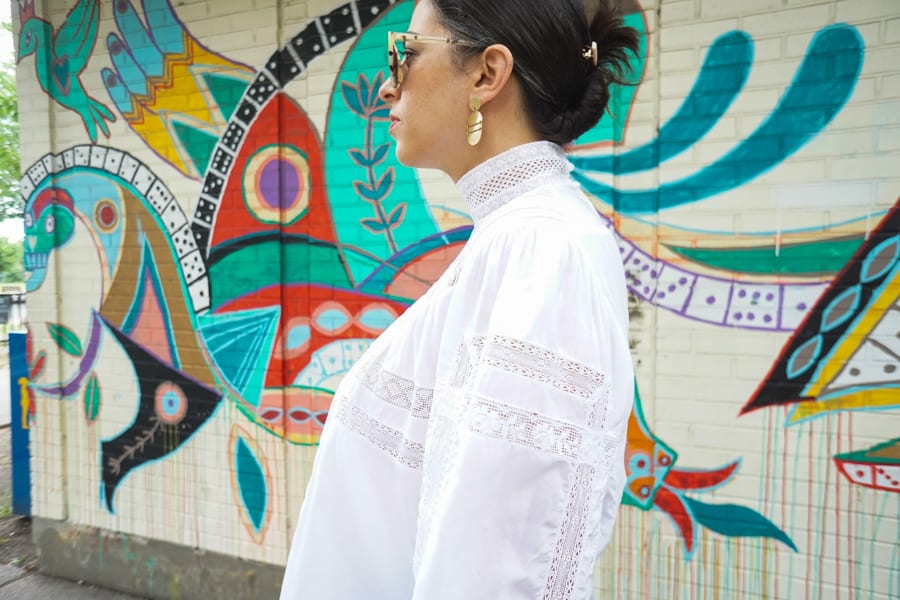 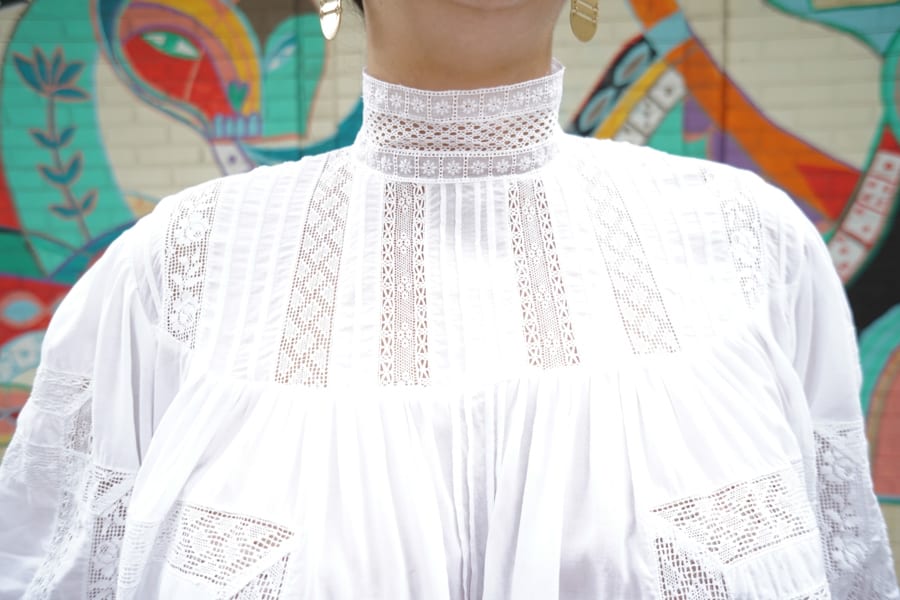 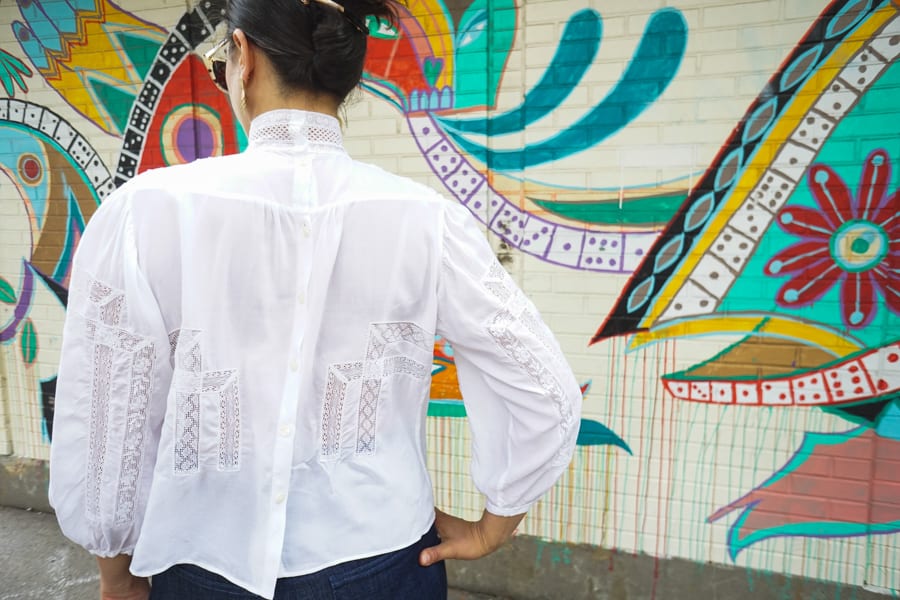 I was hoping to French seam the entire thing, but decided against it where the yoke is attached to the gathered front and along the gathered armscye – these seams I simply serged, historical accuracy be damned. The back is finished with a simple button band, with sew-in snaps on the collar. I’m not sure if it’s because the back yoke is slightly too narrow or simply bad button placement, but the band at upper back gapes a little, so I may add a snap there as well.

The pattern called for a tie to be inserted at waist height next to the back button band but I found it just created gaping when I tied it in the front so I removed it. I would have preferred to sew the tie directly into the side seam, but I kinda like the loose, flowing vibe and am not convinced I need it.

All in all this project took a couple of weeks of on and off sewing, likely around 20 hours once I factor in all the time prepping the fabric and installing the lace. It was peaceful, meditative work and I loved having something like this I could pick up and put down whenever the moment struck. I’ve definitely caught the historical sewing bug (using these old school techniques really roots you to the history of the sewing tradition) but don’t expect to see me making full-scale historically accurate costumes anytime soon. I’m more interested in finding ways to integrate these types of garments in my life in a more holistic way, and I think this blouse looks pretty great with a pair of skinny Ginger jeans and clogs. Shooting this was actually the first time I wore it since I was terrified of spilling something on it, but I’m hoping it will get more wear this fall, even if it means battling that cotton lace shrinkage the next time I handwash it (the only way I would ever wash a garment this finely crafted).

Have you ever dipped your toes in the historical sewing world?