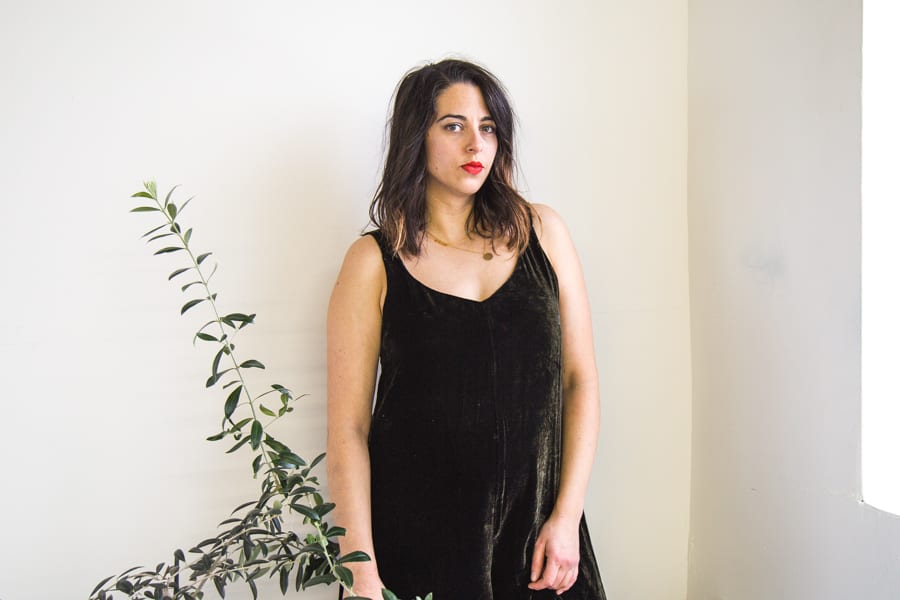 The deadline for our Sew Frosting Challenge is around the corner (Friday to be exact) and I am coming in just under the wire with my second Frosting project (here’s my first), this insanely luxurious and swishy Amy Jumpsuit in silk velvet. Yes! Silk! Velvet! Is! A! Thing!

Of course, I’m not entering the challenge but I would have kicked myself if I didn’t meet a deadline I created. Last week I forced myself to block some sewfrosting time into my workday even though it was a crazy busy week. I broke every step down into bite-size chunks and then added them to my daily to-do list; since it was in my agenda, I actually did everything in a timely manner, and I realized this might be a good strategy in general when I don’t have the time to dedicate a full day or weekend to something I’m working on. I respond well to things that need to be checked off. 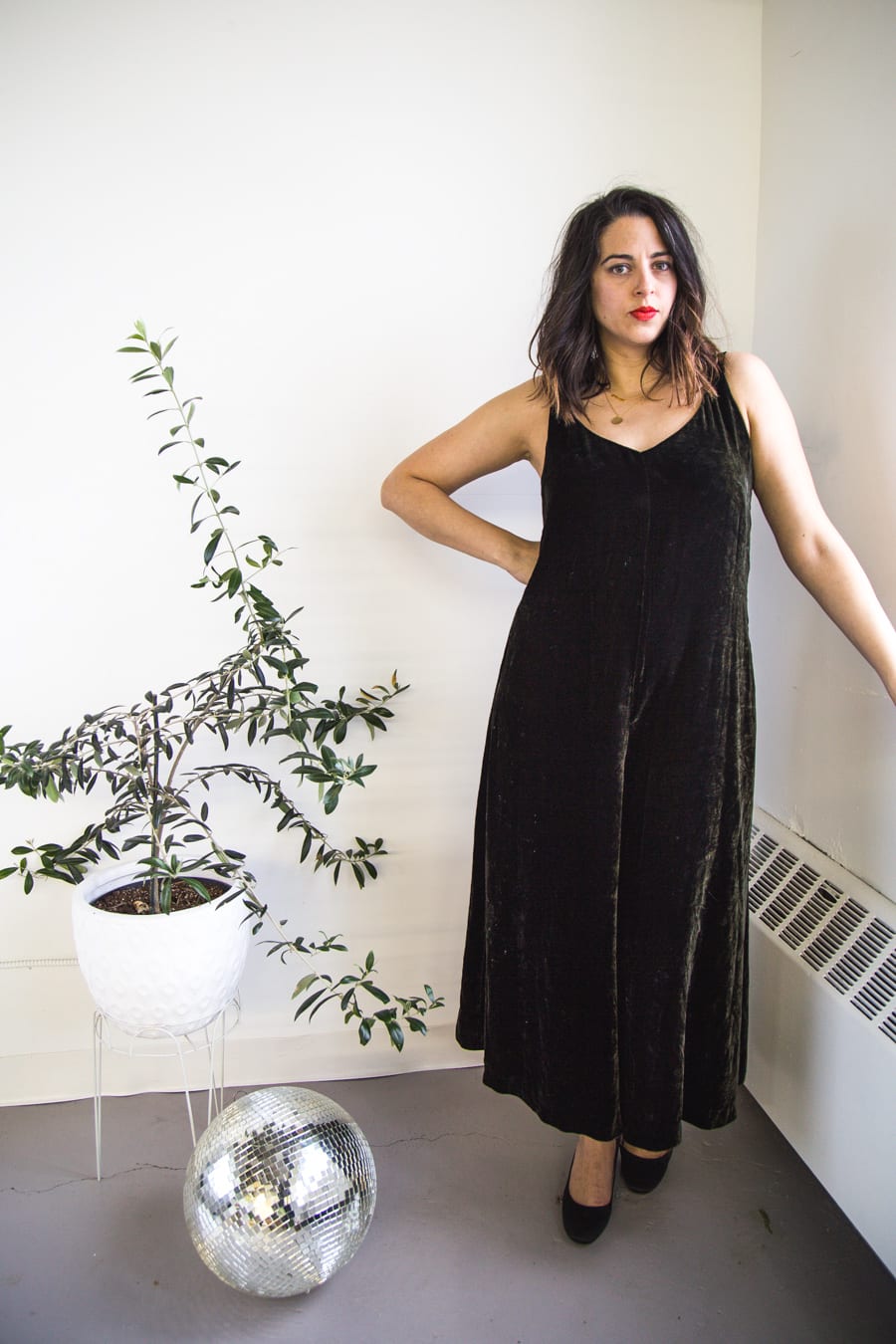 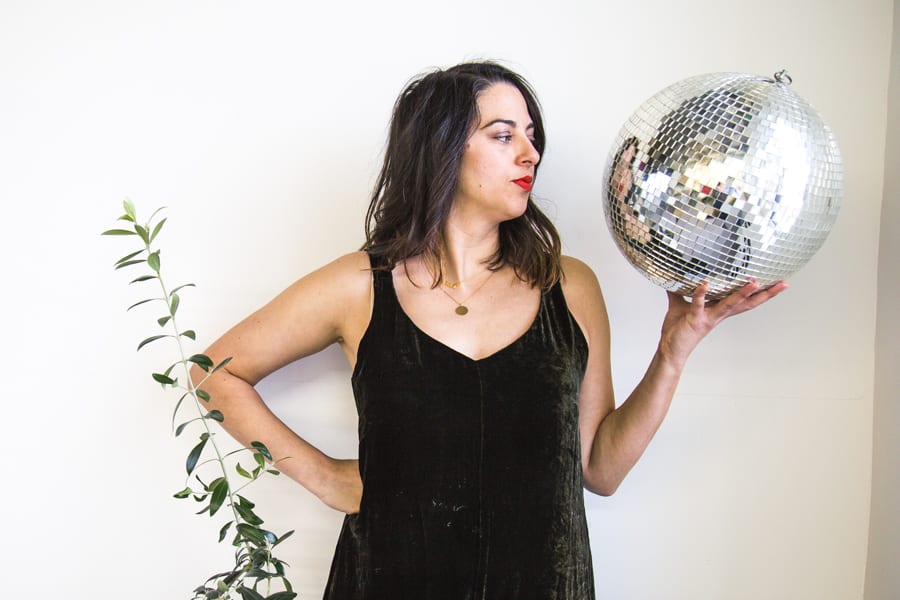 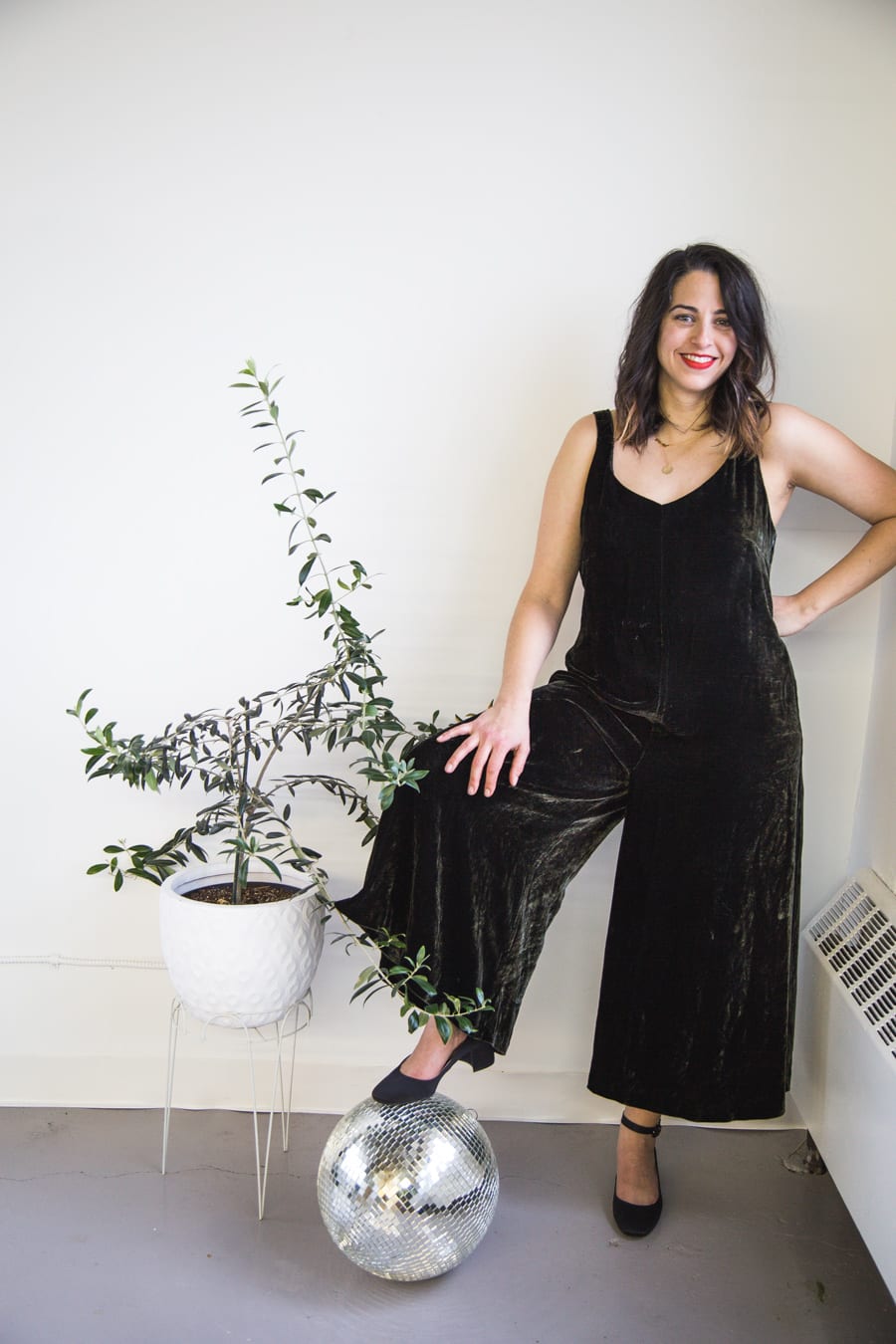 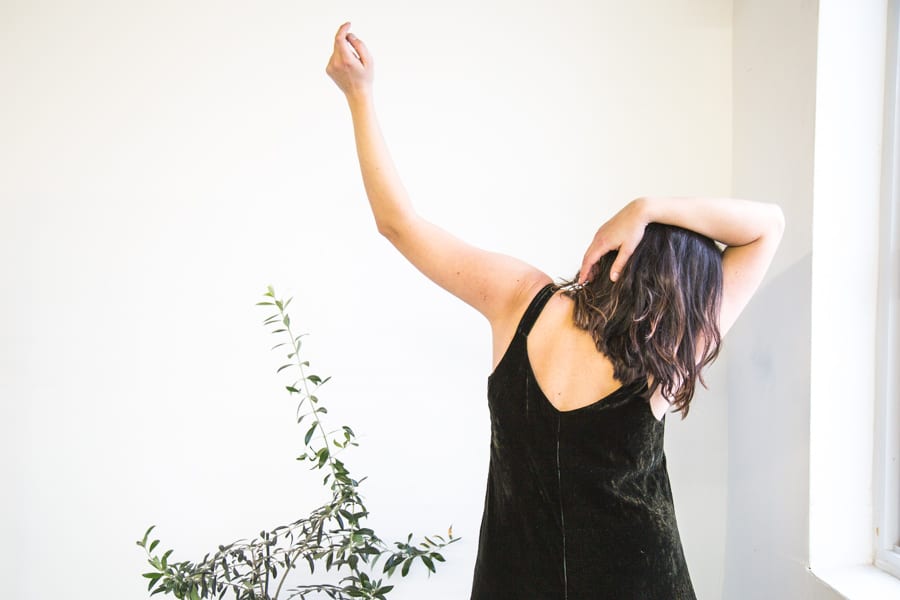 I managed to get everything done in time to take pictures on Friday, despite how insanely dark and gloomy it was in the studio. The velvet is much more textured and “crushed” looking in reality but it’s quite difficult to capture in photos.

I don’t know why I decided I had to have a velvet Amy at all costs; I think it might have been due to how much velvet we’re seeing this season. I’ve been seduced by its rich texture, and believe it or not, this is the first time I’ve ever sewn with it! The silk silk-rayon velvet  I used came from Mood; I had originally ordered a lighter, more sage-y colour but they called me and told me it was out of stock. After pouting for a bit I chose this stuff instead. It’s got a gorgeous drape and is ever so soft and sumptuous, but I do wish it wasn’t quite so dark. I found the listing pictures to be a little deceiving when it arrived. 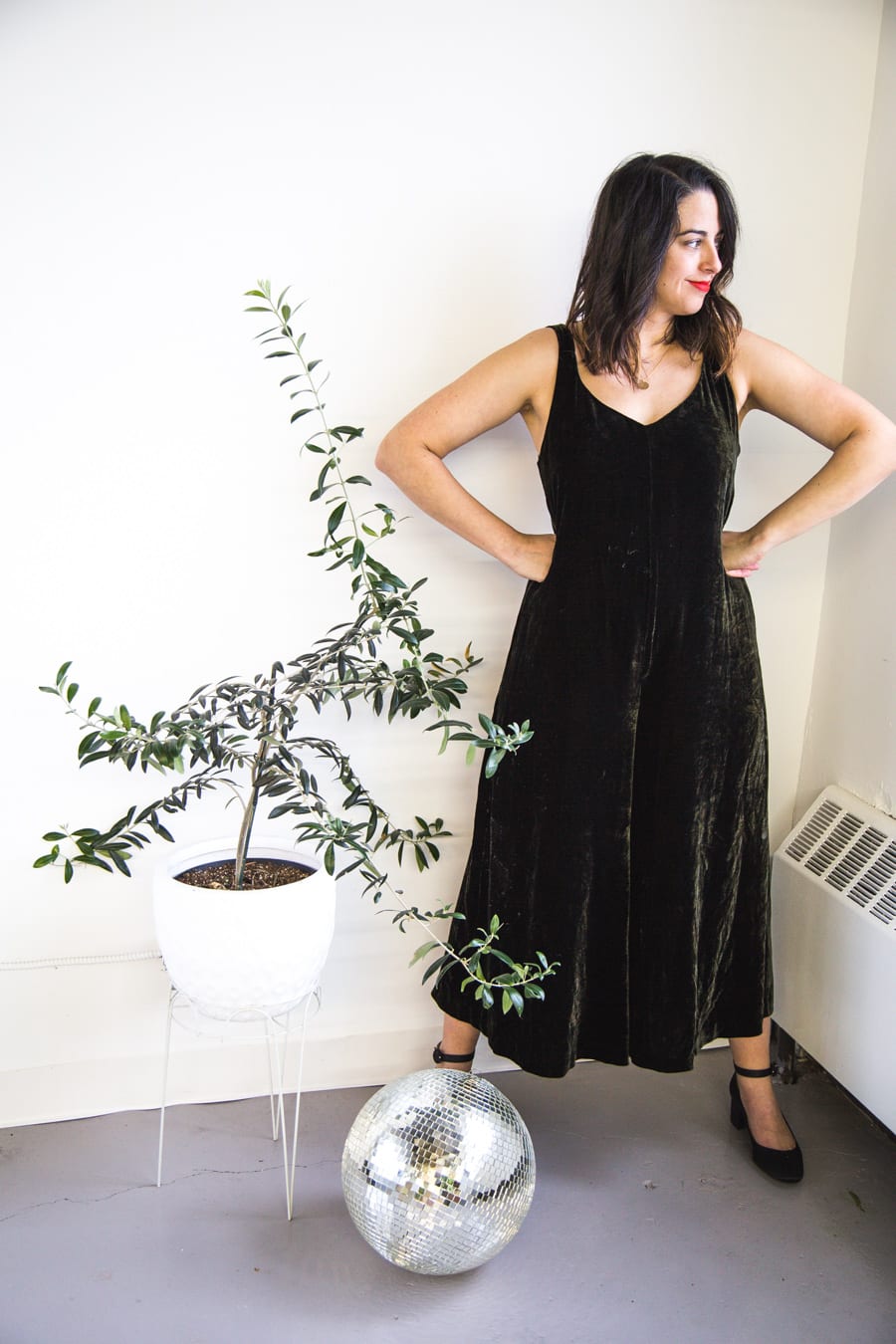 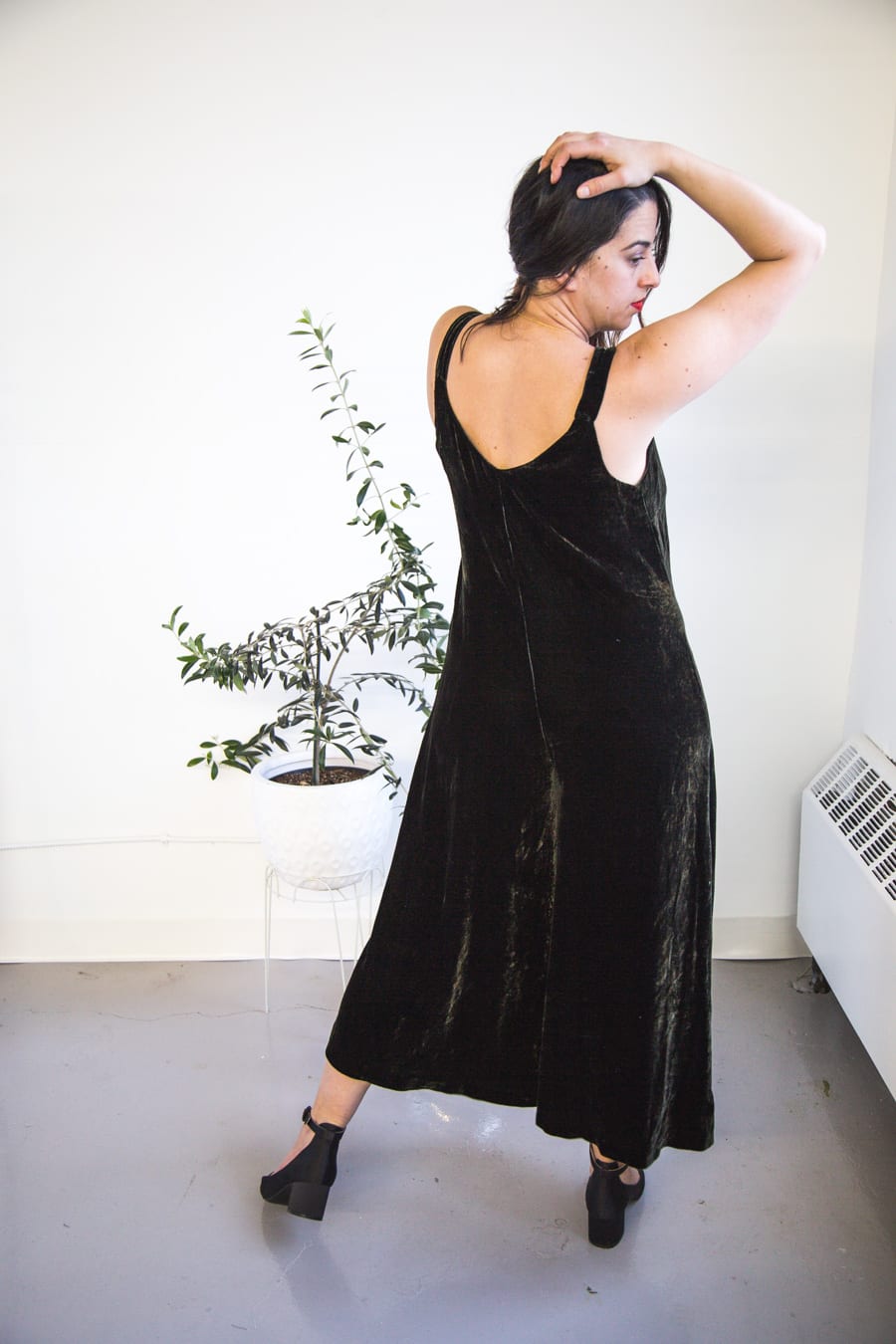 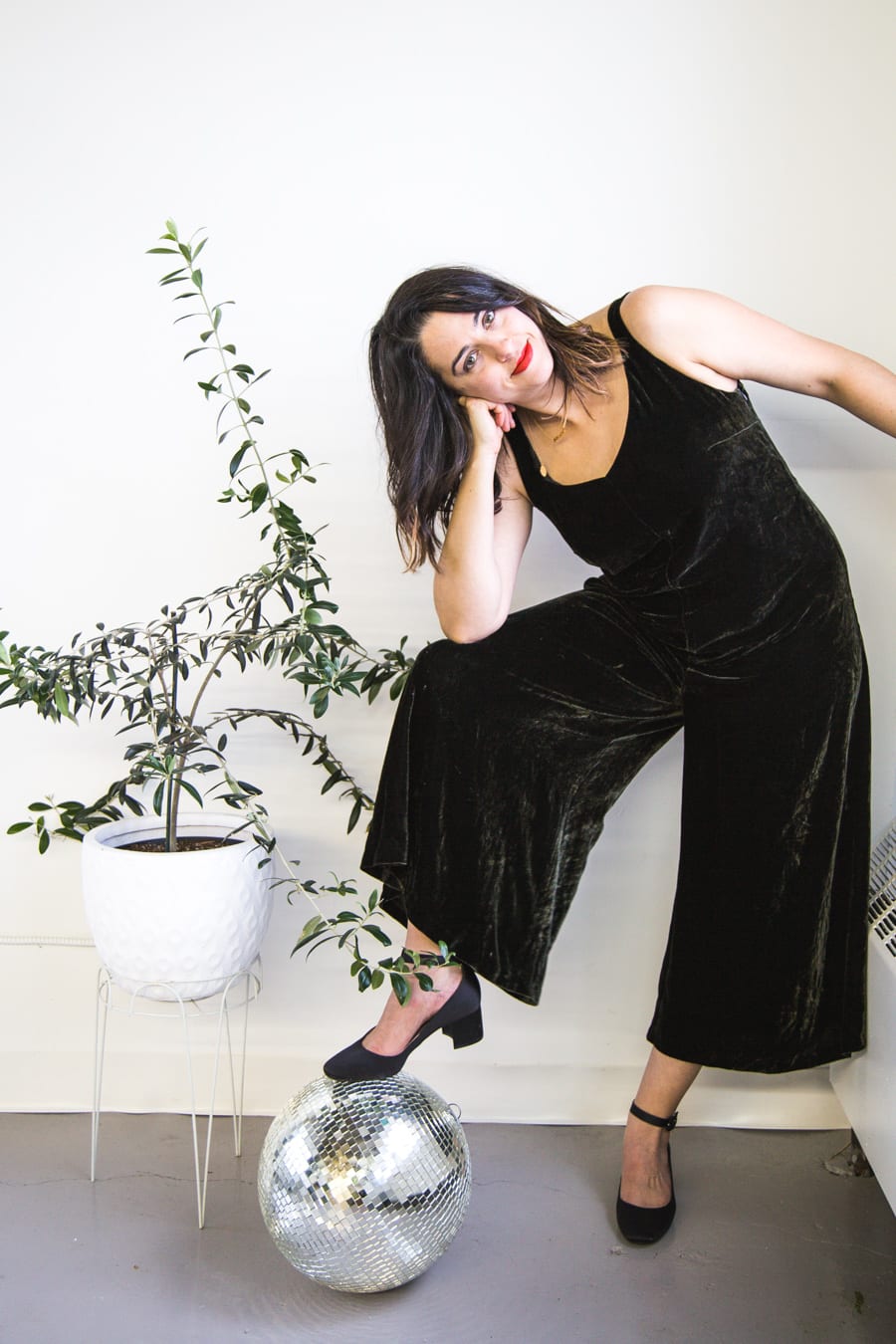 Sewing velvet is a bit of a beast. It is super shifty because you have two napped surfaces pressed together; they basically want to run in opposite directions (like me whenever I see an ex-boyfriend). After a bit of research and trial and error, I discovered the quickest and easiest solution is just using Wonder Tape to anchor the seams together before stitching. If you don’t have any wonder tape around, hand basting works well too, but obviously takes a bit more time.

The biggest thing to keep in mind when sewing velvet is not crushing the nap! This makes pressing a delicate art. I purchased a velvet board specifically for this reason, and while it was GREAT for letting me press seams without leaving marks, you have to be uber careful when moving the fabric around. I snagged it quite a few times on the super sharp needles. I will just say that there are quite a few areas that are secretly interfacing on the wrong side and leave it at that. If you don’t want to spring for a velvet board, pressing on another piece of velvet or a towel allegedly protects the nap as well. 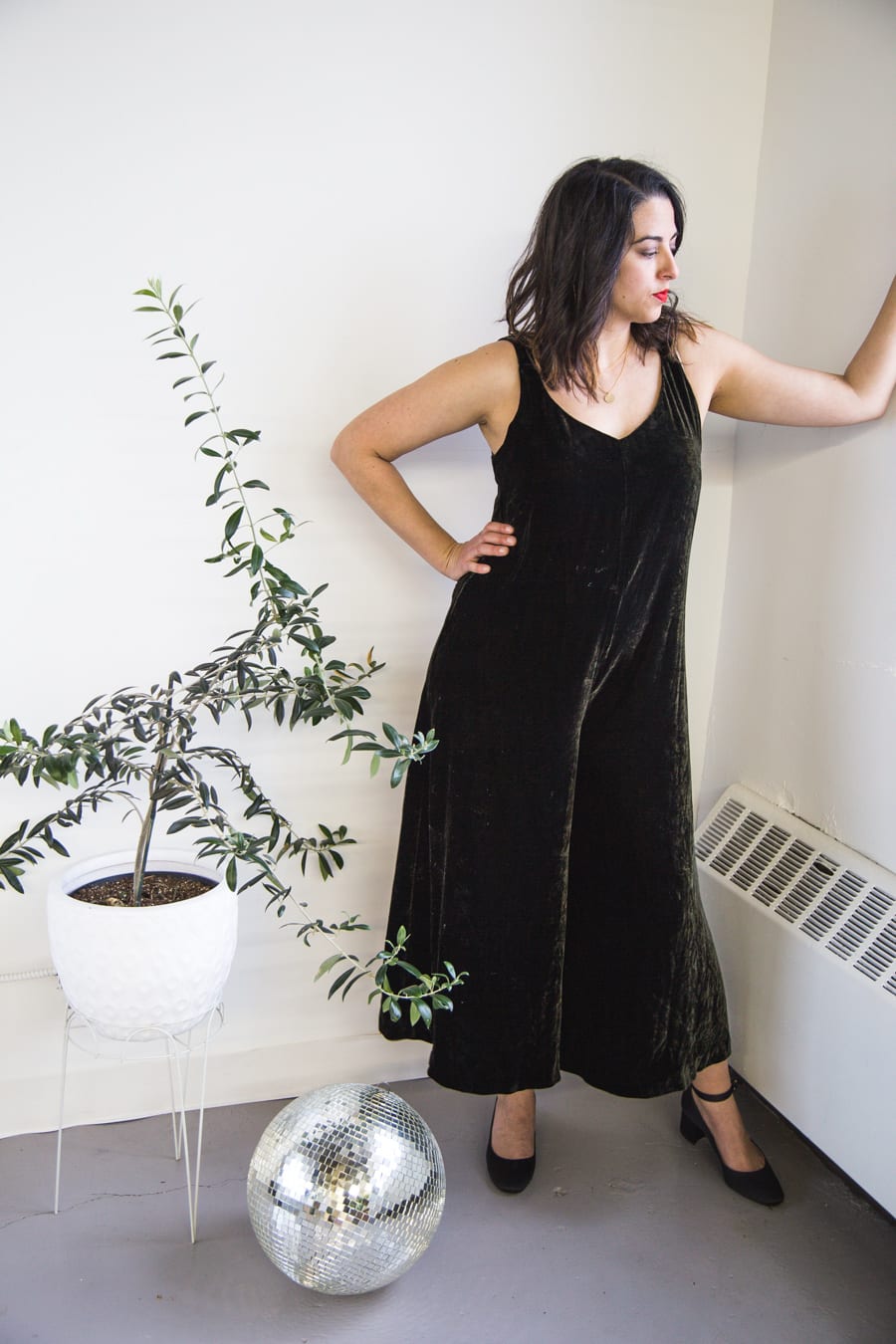 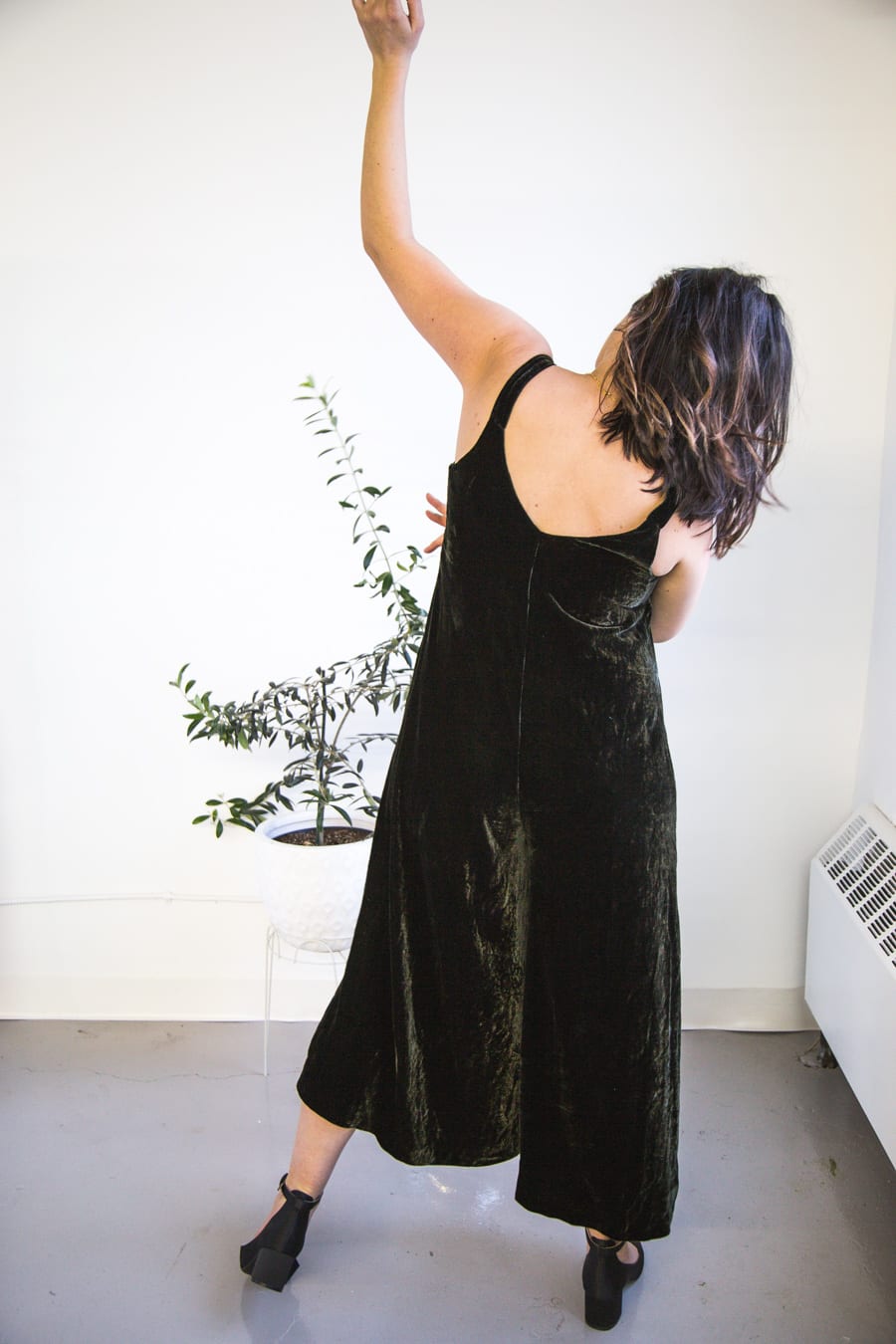 I lined the straps and bodice with some rayon bemberg I had lying around; velvet on the inside would have been a bit much. Since the lining is so light, it really wants to flip out so I am going to go hand tack the seams in place using some invisible stitches. I also omitted pockets to save some time; it’s not the kind of garment I would want to stuff my hands into anyway.

I was a little bit nervous about sewing Amy in a heavier weight fabric, but I can honestly say I LOVE ITTTTTTT! The weight of the velvet gives it a nice swing and heft, while also still be drapey enough to create some shape. I feel like a beautiful holiday angel in this thing and I know it’s something I am going to turn to again and again. Worn like this, it feels quite evening, perfect for a fancier holiday or New Years eve party. However, I feel like it could go a lot of different ways based on how it’s layered, so we are working on a styling post with a few different options. 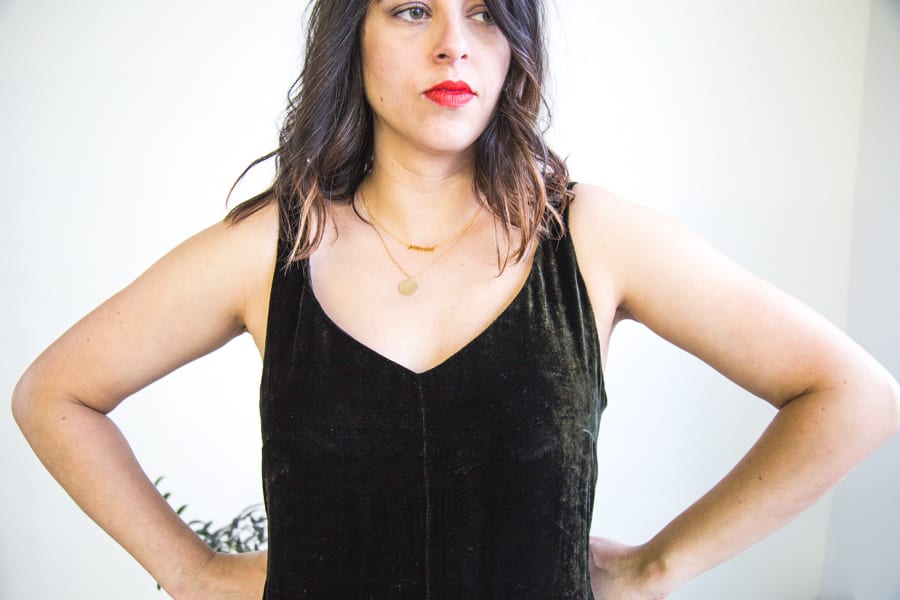 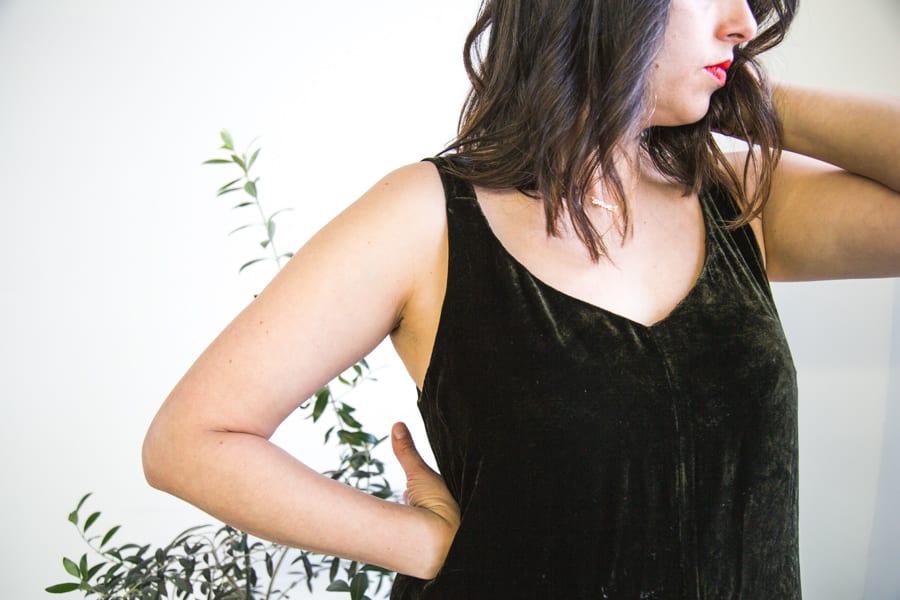 Naturally I’m wearing it with my Sewist necklace; lately, I’ve been layering it with a gold pendant I got in Stockholm. I’m a minimalist when it comes to jewelry and this is my ideal necklace situation when I want to make a more delicate statement.

What do you think of this velvet Amy? And have you had any crazy velvet sewing adventures you’d like to share? 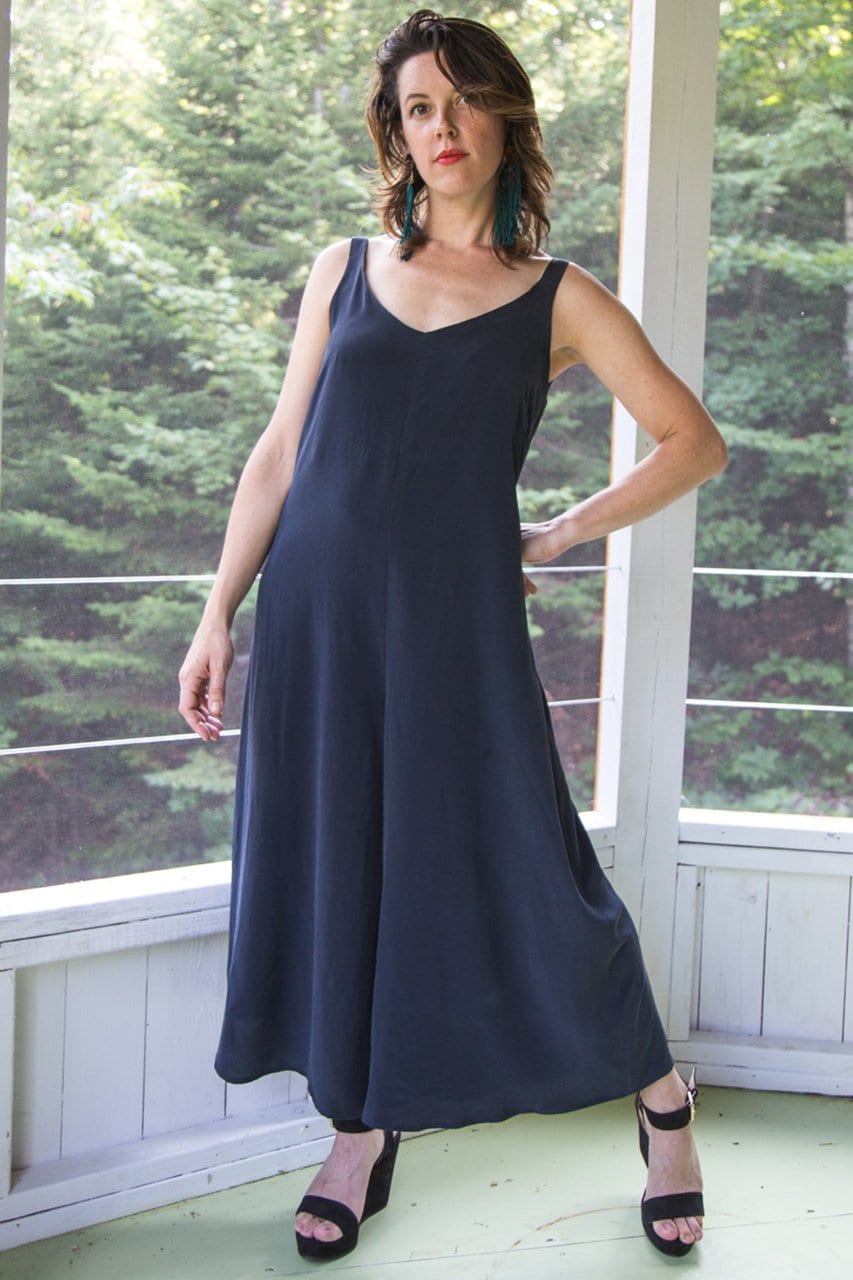