Praying for Spring in Ginger Flares 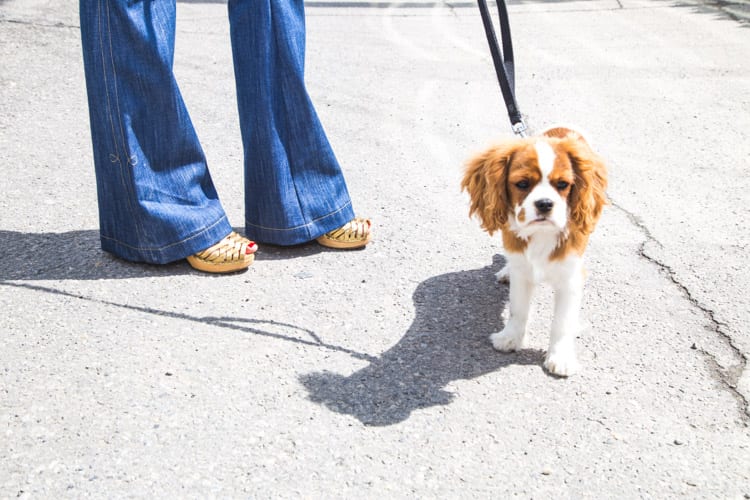 I worry sometimes that I bemoan Montreal weather a little too  much on this blog, but guys, this city is playing so hard to get with spring right now that I’m pretty sure it’s been reading The Rules. Every day I wake up and take a hopeful look outside, and then resign myself to getting gnawed on while trying to put balloons on Harry’s feet, all so he doesn’t freeze his tootsies off in some gulag-inspired combination of slush, black ice or freezing rain. I feel like I’ve never been more co-dependent with Montreal and her mercurial moods since getting a dog; I’m outside for a few hours a day whether I like it or not, and most of the time she’s giving me the finger while not returning my phone calls.

When we caught a  little glimpse of sunlight on Saturday, we rushed outside to get some photos of my new favourite outfit even if there was still a little snow on the ground. I even threw on my Hasbeens clogs for the first time since September, a silent protest against the Sorels I’ve bene trudging around in for months (we also shot the new pattern that day, hence the high quality of my hair game – my kingdom for a wavy blowout every single day….)

I’ve been trying to pack in some spring wardrobe planning and making,  and this pair of Ginger Flares was high on my list. I’ve had this particular denim earmarked for flares for over a year now and I was so excited to finally cut into it. A mid-weight Japanese stretch denim, it has just the right amount of body for the flared leg, and just enough stretch to get the painted-on, “I’m an extra from Dazed & Confused” look I was going for…. 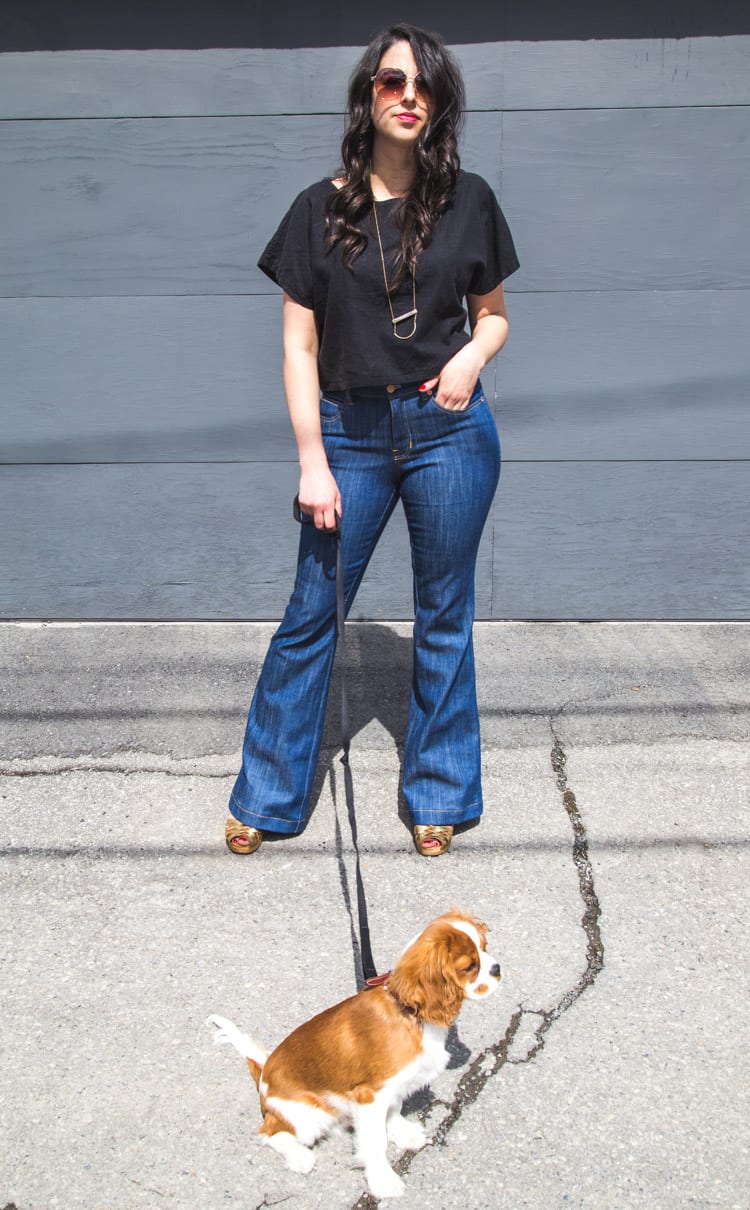 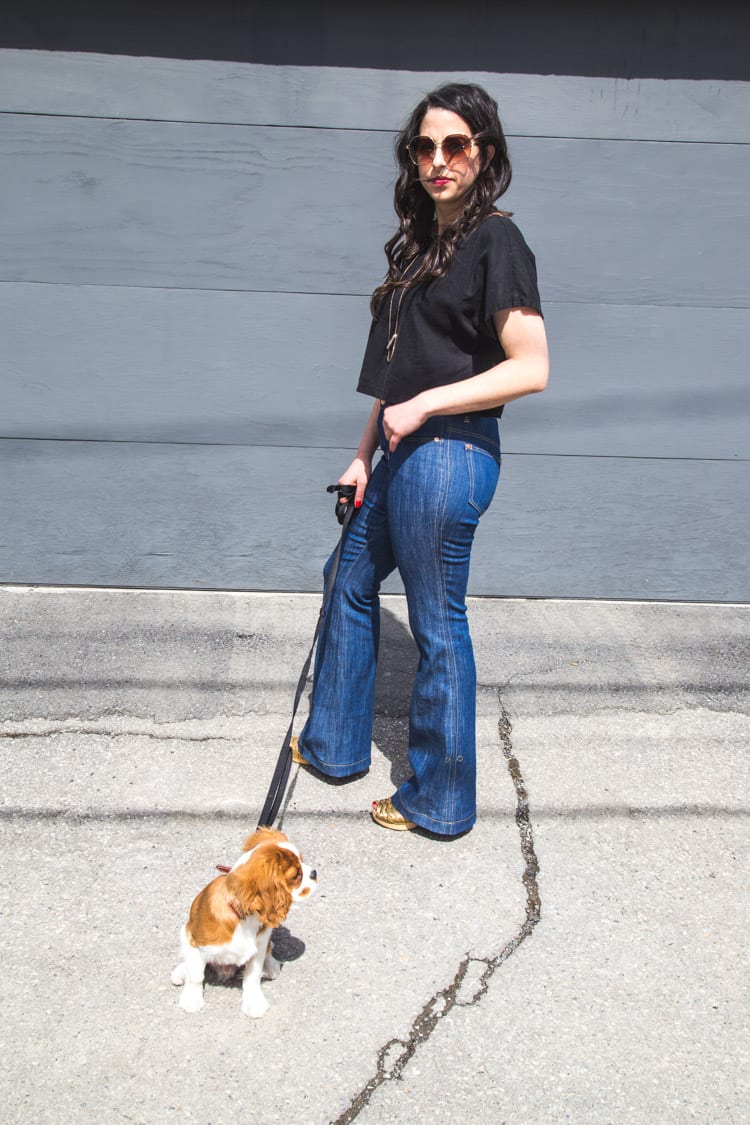 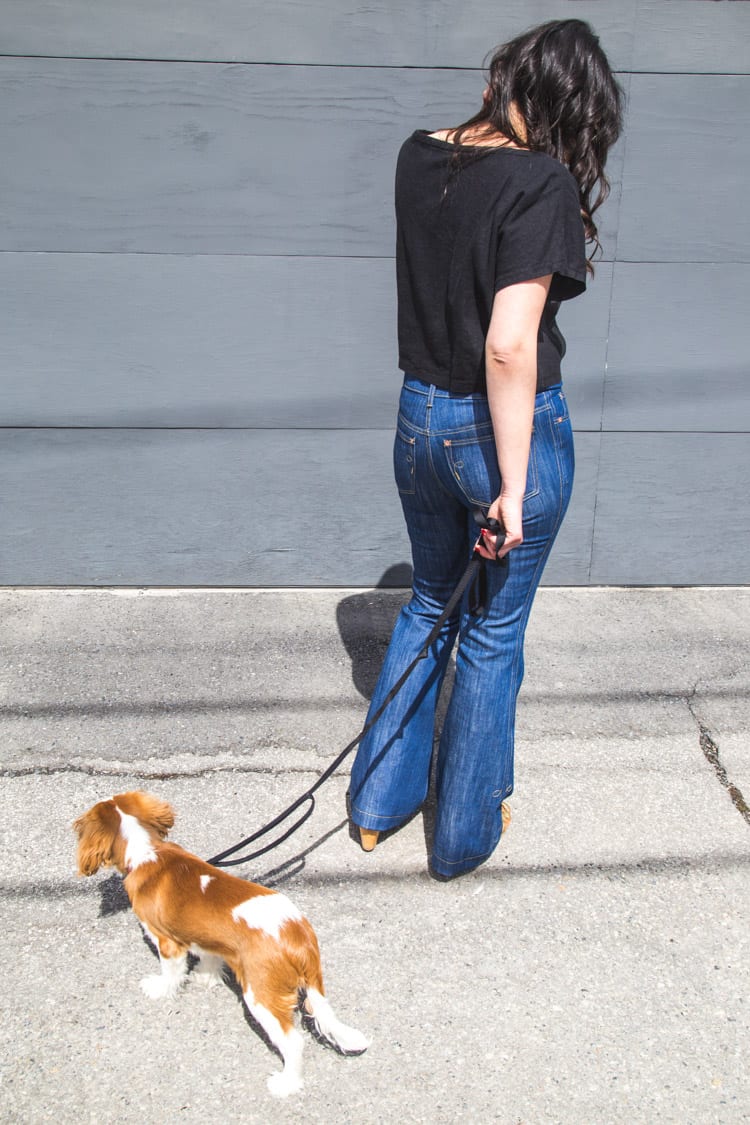 The colour of this denim is fabulous. I’ve found it really hard to source stuff that isn’t a deep indigo, so I pounced on this denim when I found it, since it naturally looks a little distressed and aged (unfortunately my supplier no longer has any in stock). Lighter denim is hard to find because most jeans manufacturers work with raw blue indigo and then distress it themselves, mostly using chemical processes. Cone sent me samples of their denim in advancing degrees of chemically distressed lightness but unfortunately I can’t find the swatches after tearing my studio apart, or else I’d show you what I mean. Needless to say, it’s always a treat to find light denim, and it seems to be easier to find coming from Turkish, Italian and Japanese mills.

For this pair of Ginger Flares, I wanted to have a little more fun with my topstitching details. I’ve been collecting loads of inspo for my denim Pinterest board, and was quite taken with this sweet little loop detail; such a  simple touch that I decided to include it on the leg as well. Once again I did the double topstitching line along the outer seam (just like I did for my other flares). Unfortunately I forgot to topstitch the inseam, but since I won’t be able to get it done in one continuous line with the outer seams already sewn, I’ll probably leave it for now. 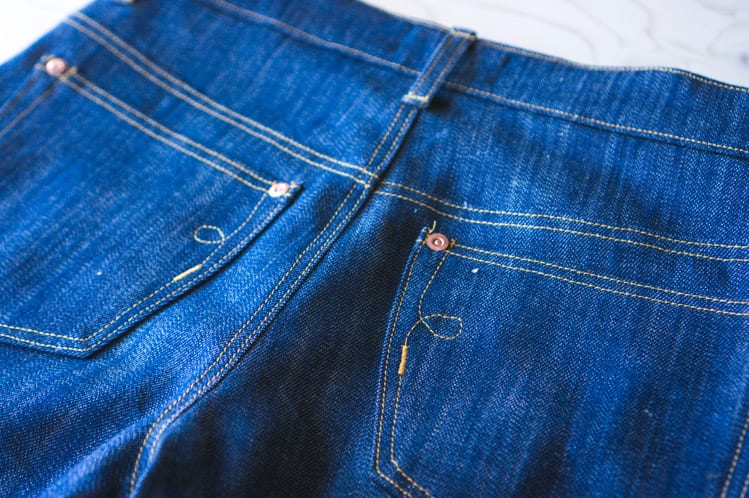 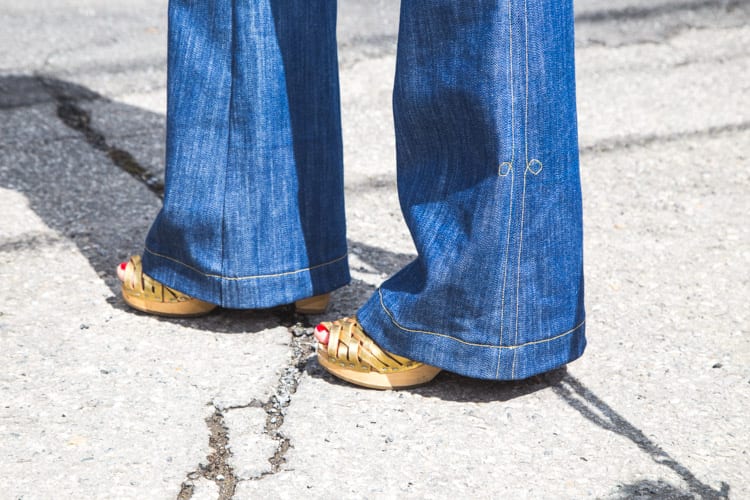 This is another one of my mid-rise Ginger hacks; I actually intended to do a full high rise with these bad boys, but had already cut out the legs before I remembered my intention. Ah well. I guess I’ll just have to make yet another pair. I’m thinking white stretch denim would be foxtastic, don’t you? 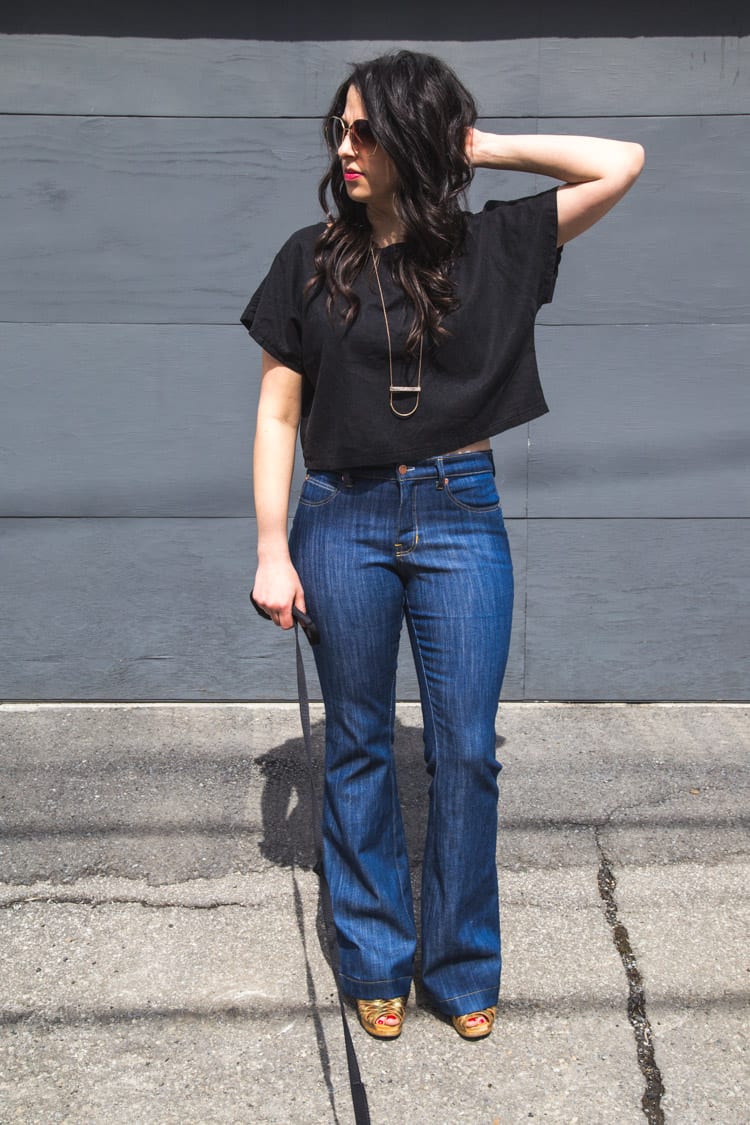 The top is newish too, at least to you. I made it last year from a  vintage 90s pattern, McCalls 4146.  I like the proportions of the cropped tee, but it’s a little too wide in the shoulder – I’ll probably remove an inch or more from center front and back if I make it again. I used up the last of the black linen left over from my black linen spree last summer, and I think it will be the perfect length to wear with higher waisted jeans this spring. 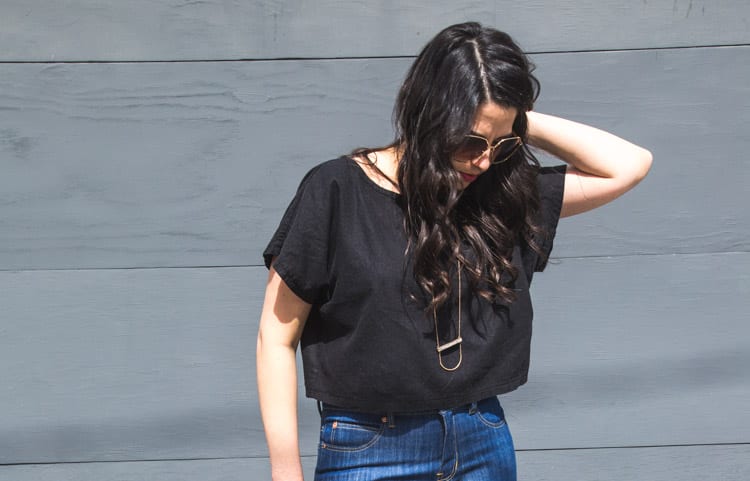 I’m especially jazzed with my new clothing labels! I wanted something soft that wouldn’t scratch my skin and found a company that silkscreens logos onto twill cotton ribbon. I’m not sure how the ink holds up in the wash yet – I’ll keep you posted. I’ve sent out quite a few samples lately for trade shows and magazines, so it feels good to know my babies are immediately identifiable. 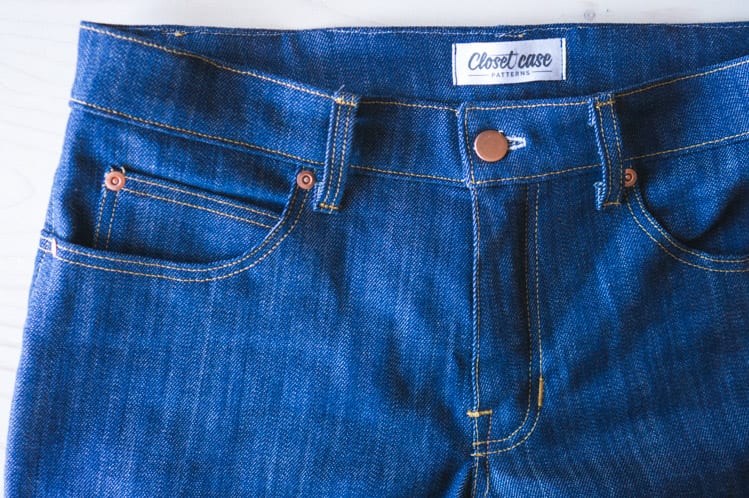 This also marks Harry’s first blog modelling appearance, surely not his last. Especially not with outtakes like this: 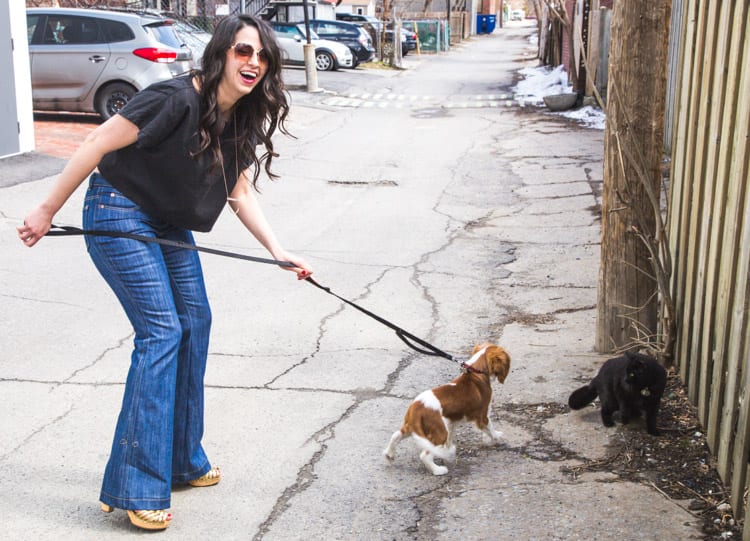 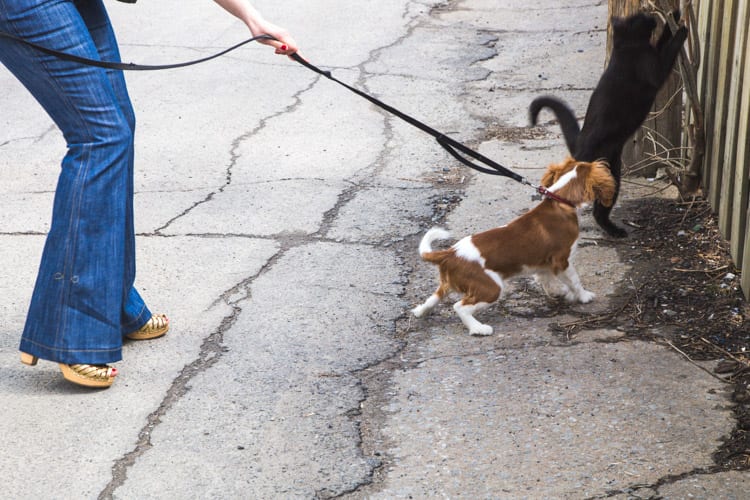 ** No cats were harmed in the production of these photographs.**

As I type, the sun is out and the day is warming up. It seems our collective prayers for spring are working… In the meantime, I should be launching the new pattern next week if everything goes according to plan… Can’t wait to show you what I’ve been working on! 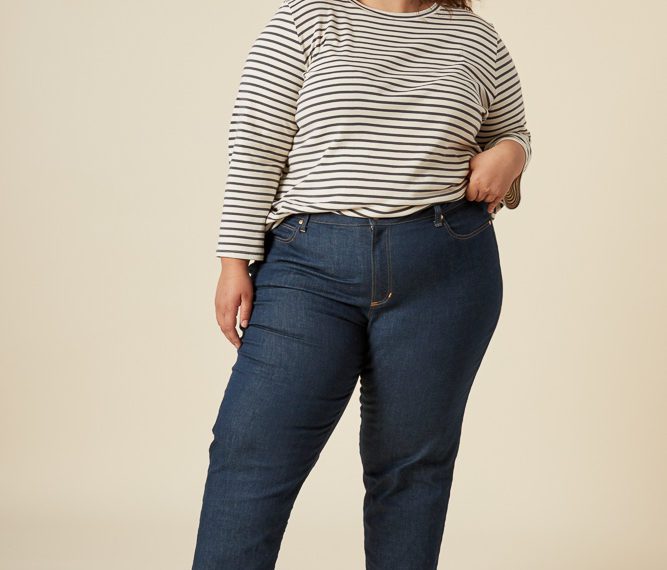