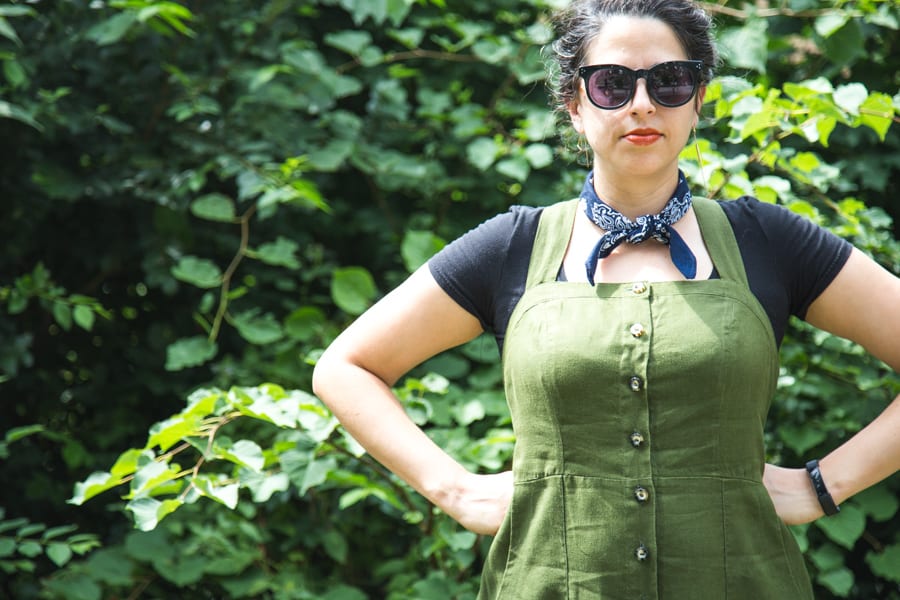 I think I’ve officially become a linen monster. I sleep in linen sheets, I spend hours obsessing over linen colours at The Fabric Store, there are increasingly growing stacks of it in our stash, and almost everything I want to sew the moment the snow melts is you know, linen. Yes, it wrinkles like crazy. Yes, there is a breaking in period while you wait for it to turn from crisp and slightly stiff to soft and faded and cozy. But there is something so viscerally appealing and analog about the texture and feel of it that I have officially become linen’s unofficial spokeswoman (last night we were watching the finale of the Bachelorette (*snore*yawn*boo#teamBlake) and my friends were joking that I should apply for the next casting call. I laughed that I would be the worst contestant ever because all I would ever want to wear was faded, camera-hostile rumpled linen sacks for the entire duration of the show. And also because I would dig a hole under the mansion to hide from the cameras and all the dumb, manscaped contestants. And also I don’t think they make linen evening gowns).

This Fiona Sundress is the closest I will come to a linen evening gown. And I am perfectly okay with that. 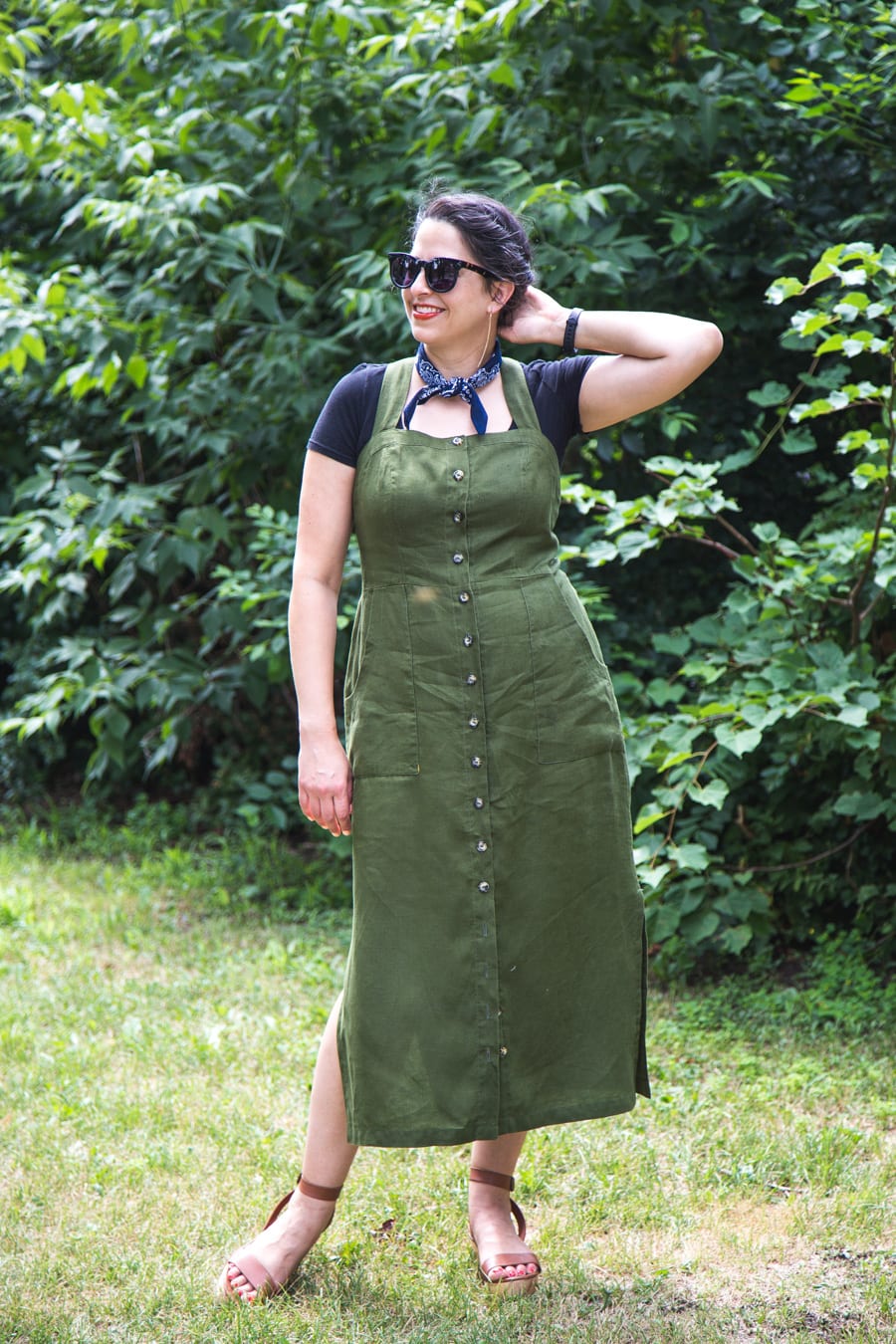 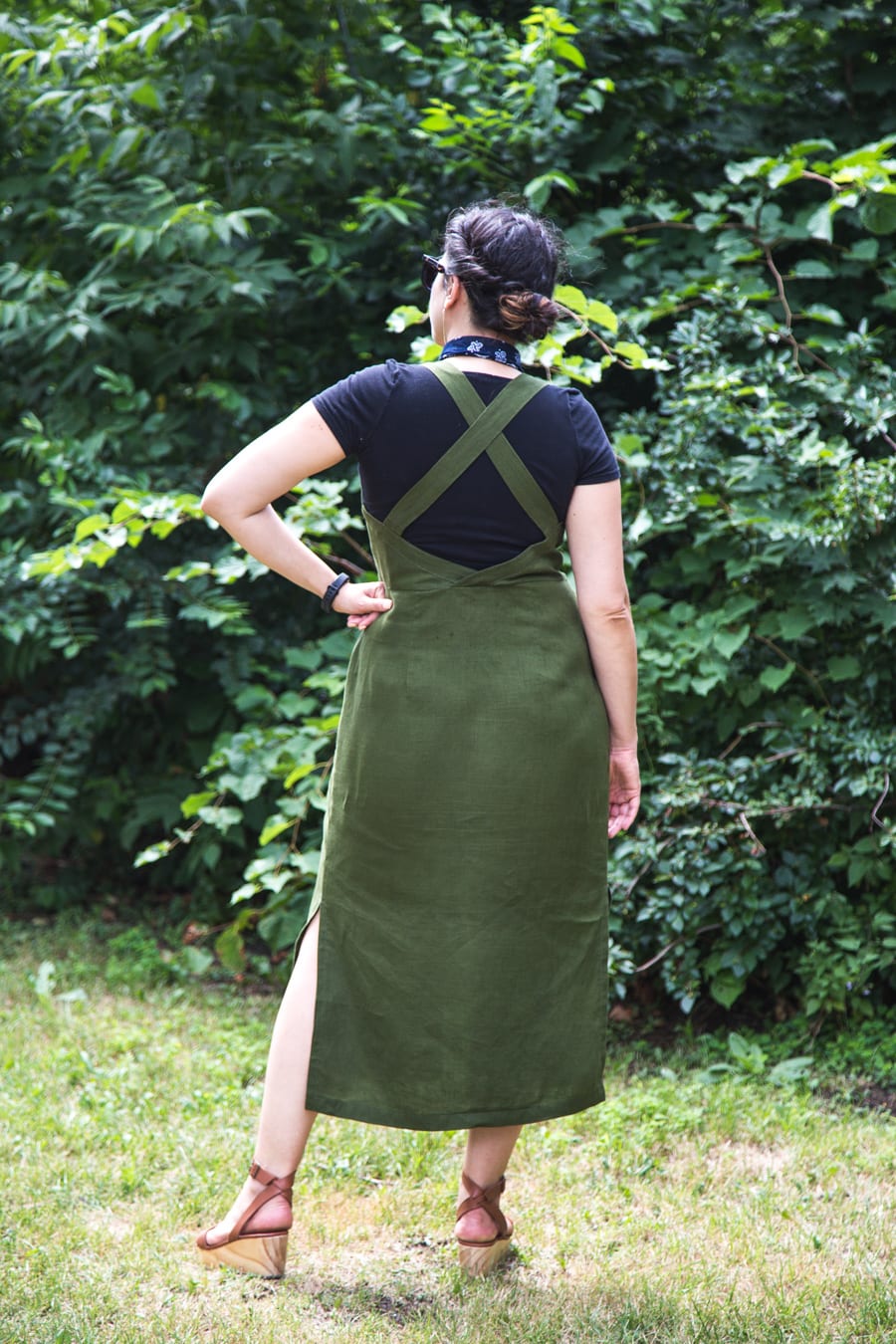 The sun was darting in and out of the clouds while we were shooting this, so forgive the fact that it looks like about 18 shades of green. In reality, it’s a sprucey-olive-y green beauty I picked up at the Fabric Store in LA before they closed. It’s a pretty lightweight linen so I wasn’t sure how it would stand up to the structure of Fiona, but it’s actually a match made in fabric/pattern heaven. It has enough body for all those seams and straps, but is so light and breathy it makes me feel like the physical manifestation of Jane Birkin singing on that Serge Gainsborough song. Je t’aime. 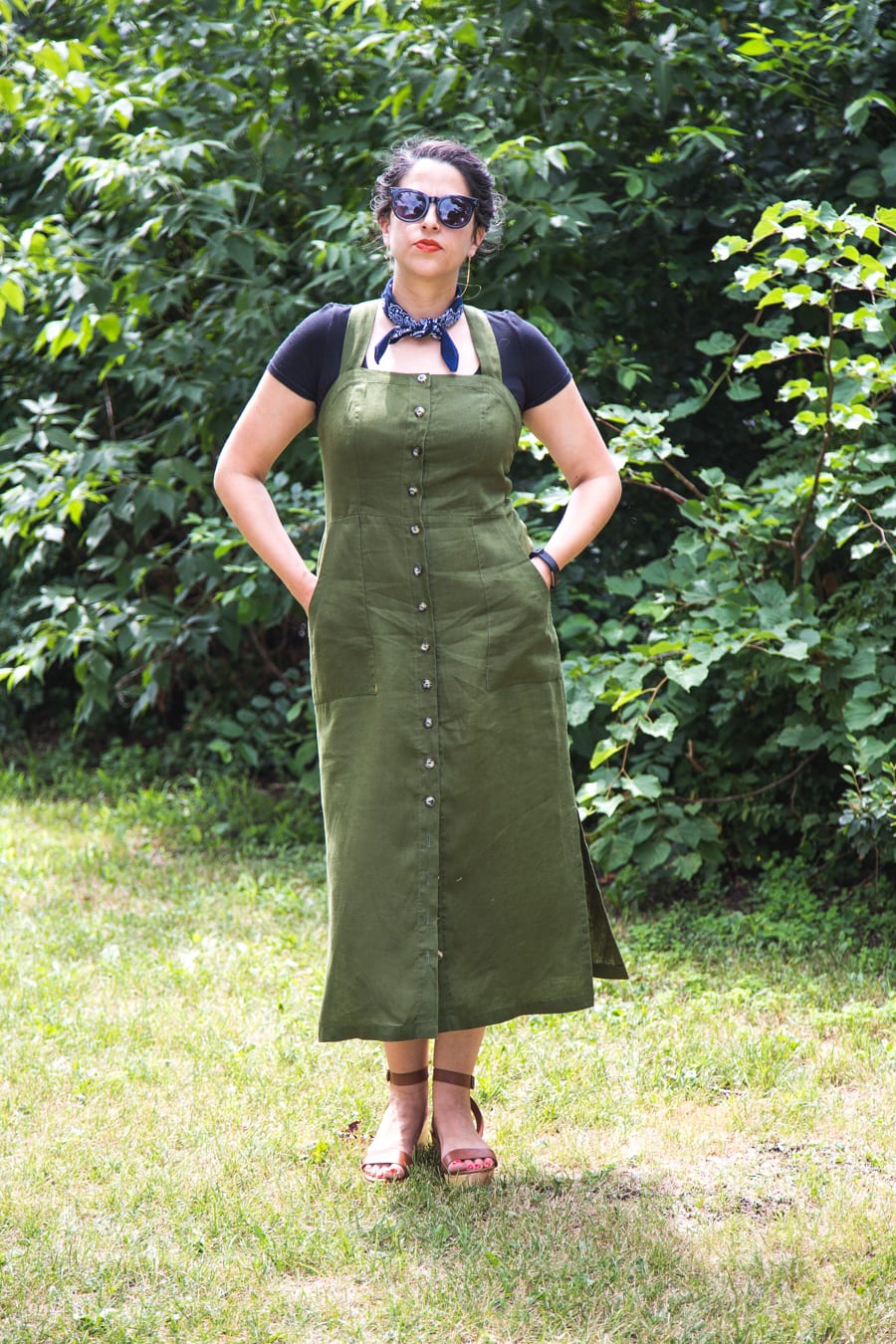 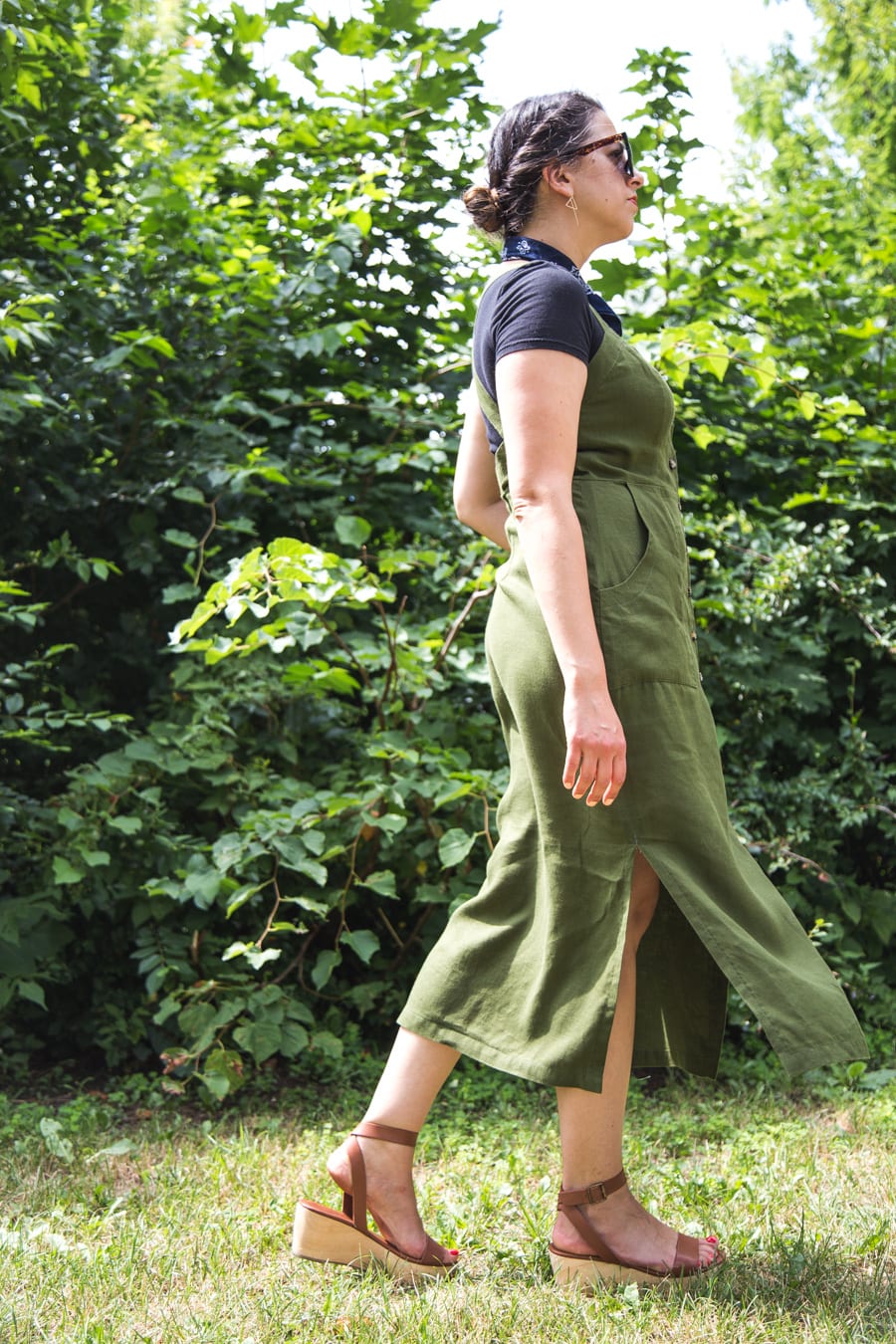 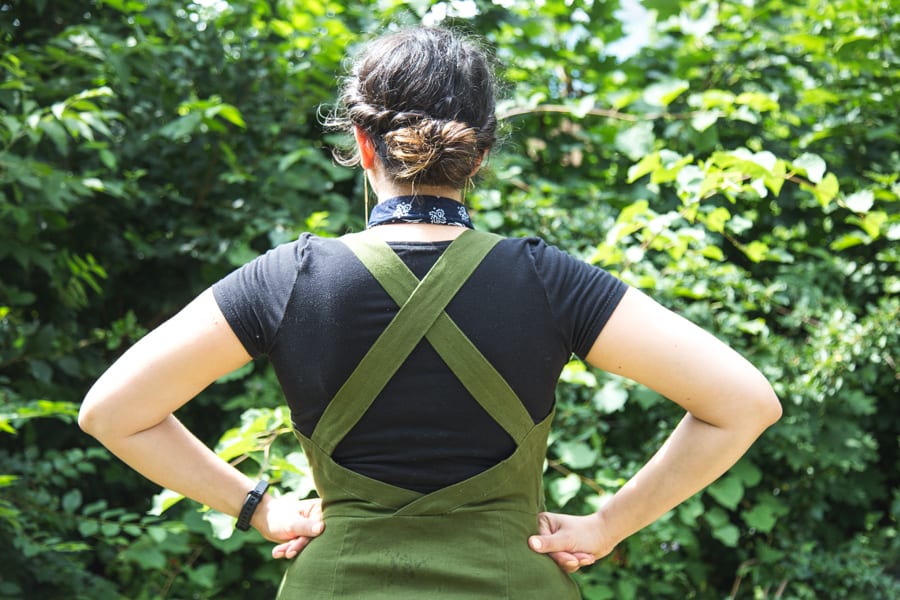 I’ve worn this tons and tons (it’s been a great first date dress, of which I have had many lately, of which I can only make the sound of a long, drawn out and exasperated siiiiigh) but unfortunately never on its own. I made the total rookie mistake of fitting it with a bra on (I learned my lesson and warn against this in the pattern instructions) only to discover that gravity is as real and indisputable as the fact that most first dates are as painful as dental surgery without anesthesia. Braless and backless, the curve of the bust is a little too high for my free-as-a-bird ladies, so I’m resigned to layering it over t-shirts with a bra firmly on. I actually really like styling it this way, so I suggest it as an option for those of you who see a backless dress and shudder in gravity-averse horror.

I didn’t have enough of these particular buttons to do the recommended 21 for the midi-length version (yes, I know that is a lot of buttons for all you buttonhole haters out there but hear me out….) so I tried to cheat and space out what I had at hand, resulting in only four along the bodice instead of five. This means there was no button placed at the widest part of the bust, resulting in gaping since the bodice is so fitted. My solution was to hand sew in a little snap at the widest point of the bust, and you can hardly notice it all. It’s worth it to take the time and sew all those buttons, although for the midi you don’t need to go all the way to the bottom; I left it unbuttoned a little in these pictures. 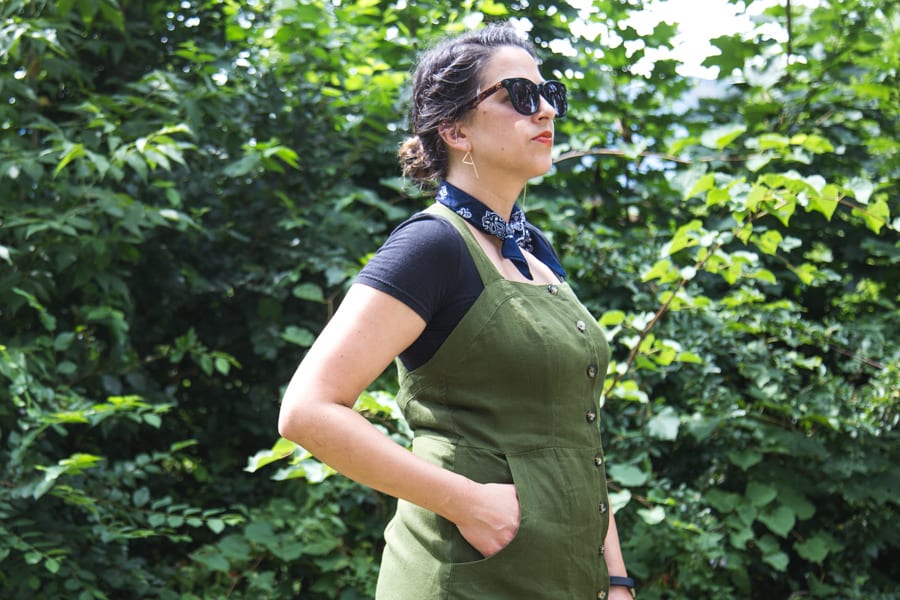 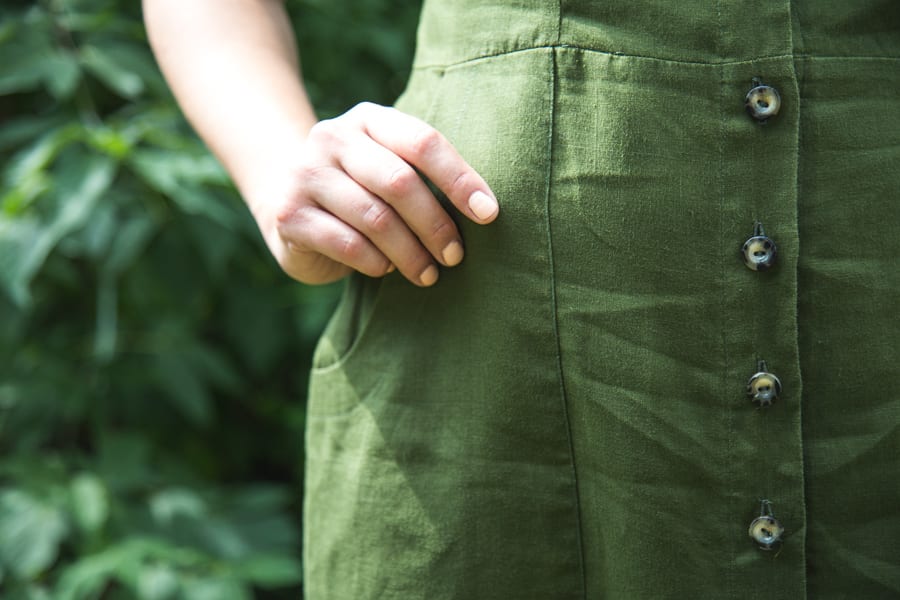 I’m looking forward to making another linen Fiona next summer, but I’ll take the time and do a proper bra-less fitting so the bodice fits better for my free birds. I actually just picked up a few new colours at the Fabric Store since they’re having a 20% off sale, and I have an addiction.

Are you as much of a linen maniac as I am? And can all you buttonhole haters chime in and tell me exactly why you hide under the bed whenever you hear the word? My machine makes lovely buttonholes so I’m not sure if you’re having technical issues or something else. I’m all ears!

Details: Fiona Sundress in green linen (I think it might be this one?), Nisolo wedges, navy bandana, Nettie cropped tee, Firmoo shades) 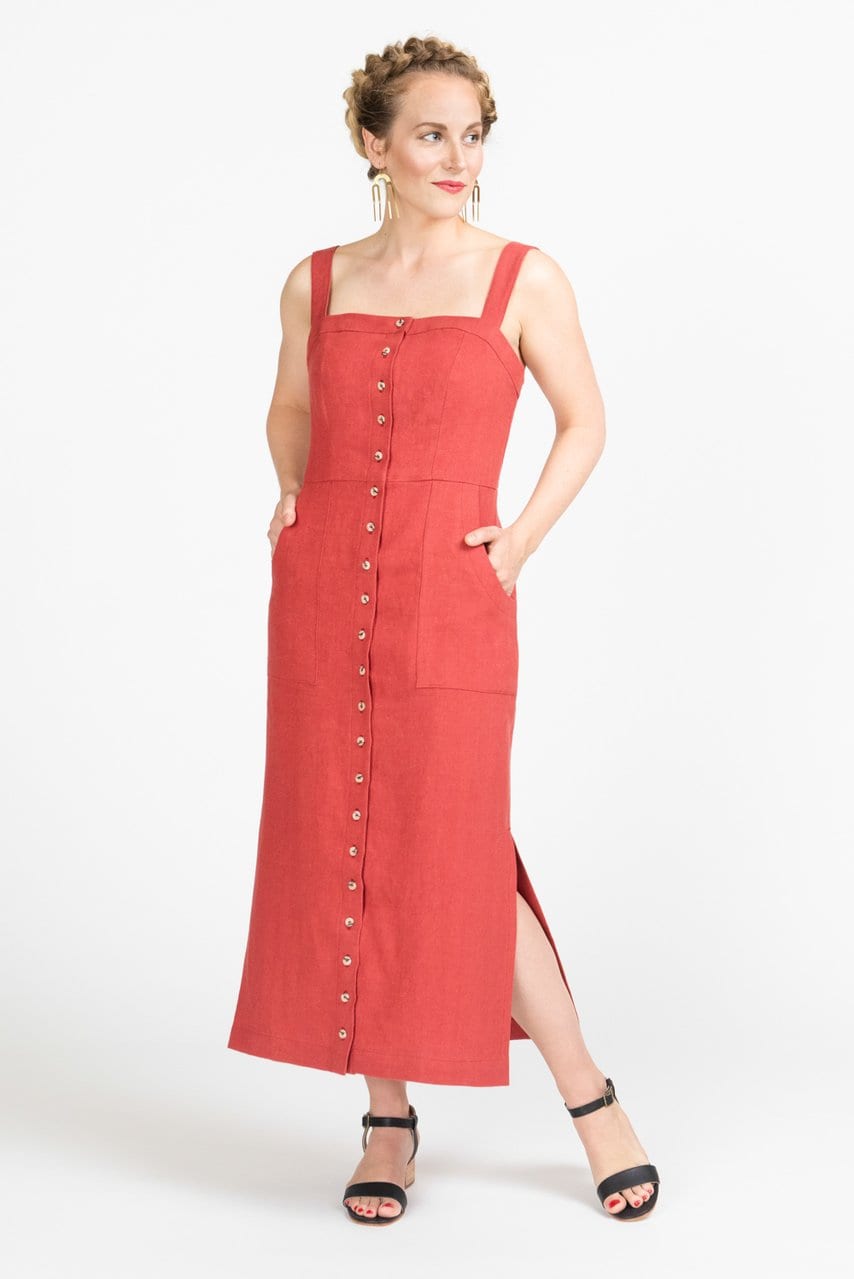