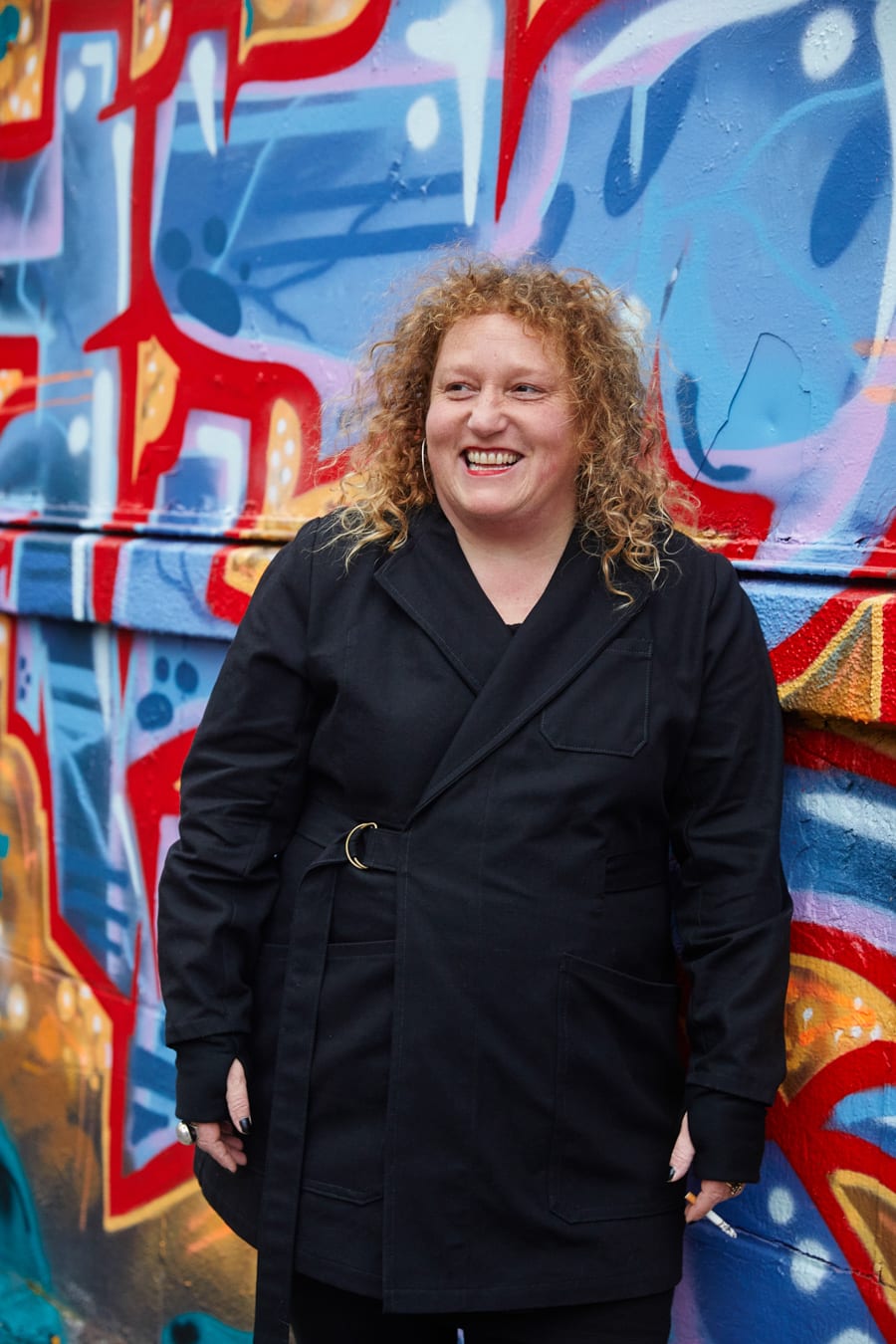 Hello there, Amy here. For the last instalment of the Montreal Maker Series (in honour of our Sienna Maker Jacket), we are catching up with local hero and concert photography master Susan Moss. I met my husband 15 years ago at the local watering hole (a beloved dive bar) where Susan was a waitress at the time. Although I hardly feel like the title “waitress” did her justice. She would be carrying five pitchers, slinging popcorn and taking orders in two languages at the same time. She knew all the local’s names (and which ones were trouble) and she ran that room with her generous smile and hearty laugh as her calling card. Over the years I watched her love of live music photography expand and mature until the present day, where she is THE go-to talent for every rock band that comes through town. We have a print in our home of this amazing moment she captured of a beer being thrown at Stephen Malkmus of Pavement at Osheaga Music Festival (we were at this show) and he kept playing, which was the highlight of the festival.

There is a certain amount of chutzpah one needs to elbow one’s way to the front of an intense heavy metal show and focus on capturing that experience. This is where I would imagine years of working in a rowdy bar might be just the training one needs. Her photos buzz with the energy of a fight about to break out, and I suppose that is the beating heart of Rock and Roll! You can check out her portfolio here.

We snapped Susan at the MTelus Theater where she was shooting a concert later (a metal band with an actual TANK on stage) and she looks perfectly at home in this venue in her jacket! For Susan’s custom Sienna Maker Jacket she needed it to be black (for those backstage shots where she needs to be an invisible Ninja)  and we also made a few other custom changes which I will get into at the end of this interview. But, without further ado let’s meet Susan! 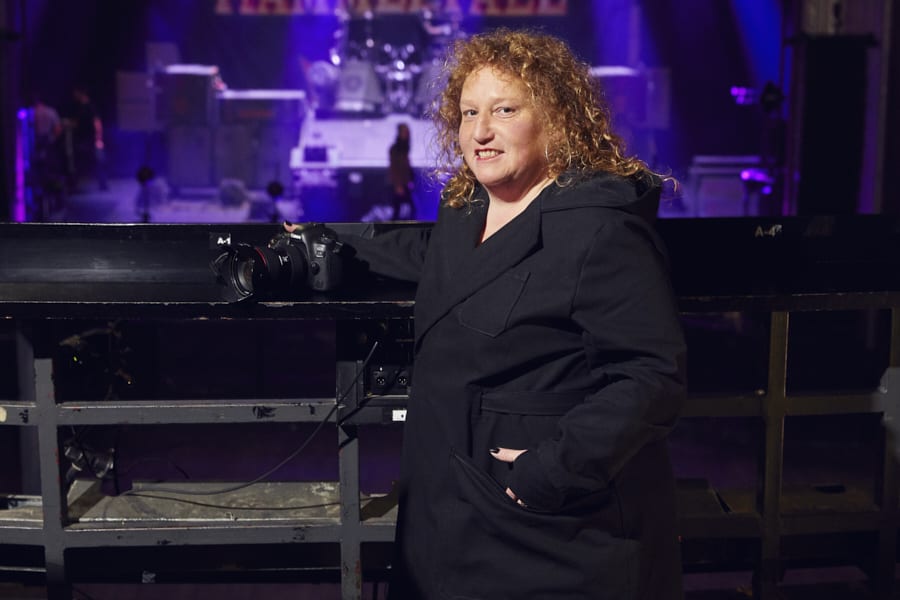 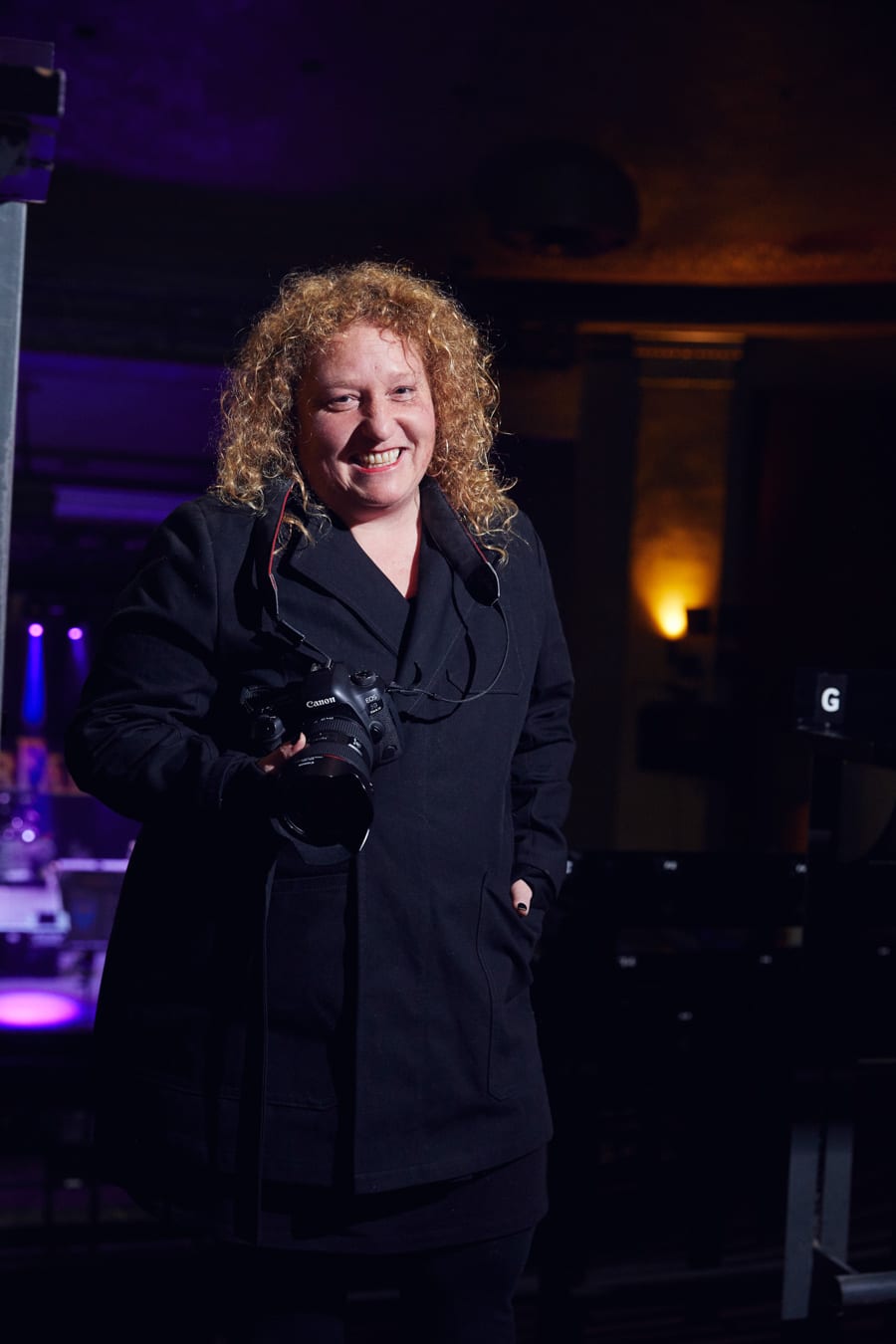 How did you break into such a competitive industry?

I’ve been doing photography for almost three decades. Working in a bar part time where lots of musicians and people in the industry went helped me make a lot of connections.

Your job involves late nights, crazy crowds and diva musicians. What motivates you to keep going when the going gets tough?

Working in bars was late nights! Now most of my shows are around 9pm and I shoot three songs and  I go home and work on my photos. I’m in bed by midnight (ish). I love watching the fans freak out at live shows, it’s one of the most fun parts of my job. Once in a while crowds are pushy and annoying, but that depends on the band. 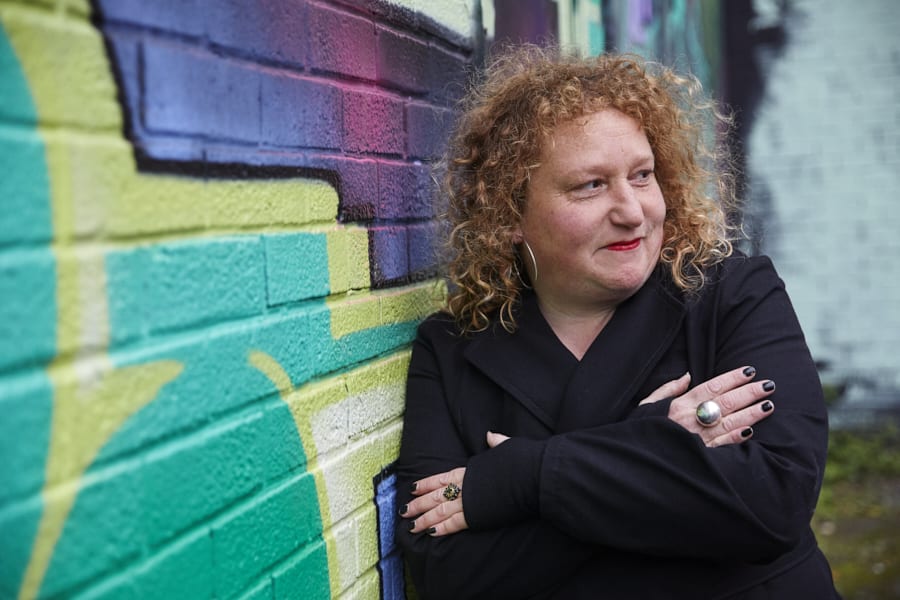 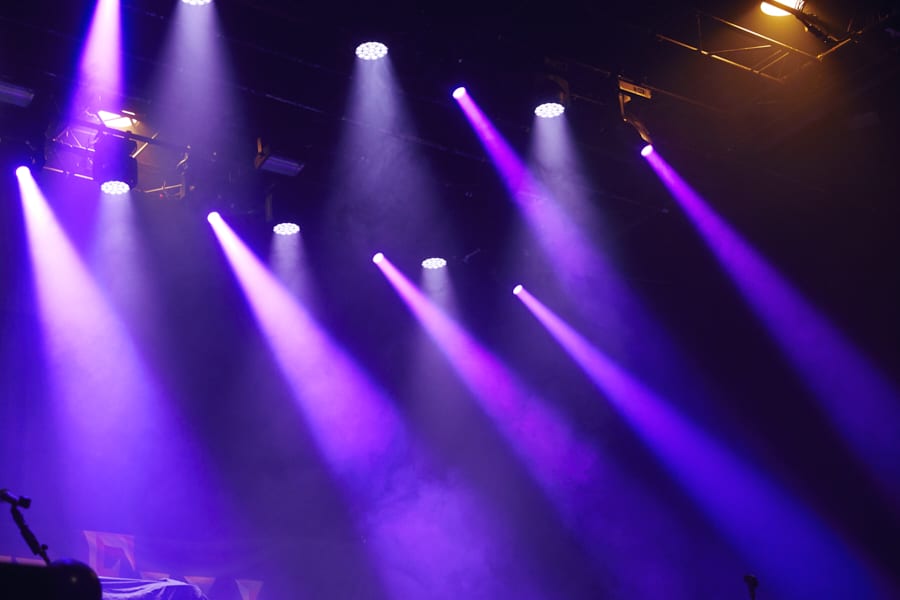 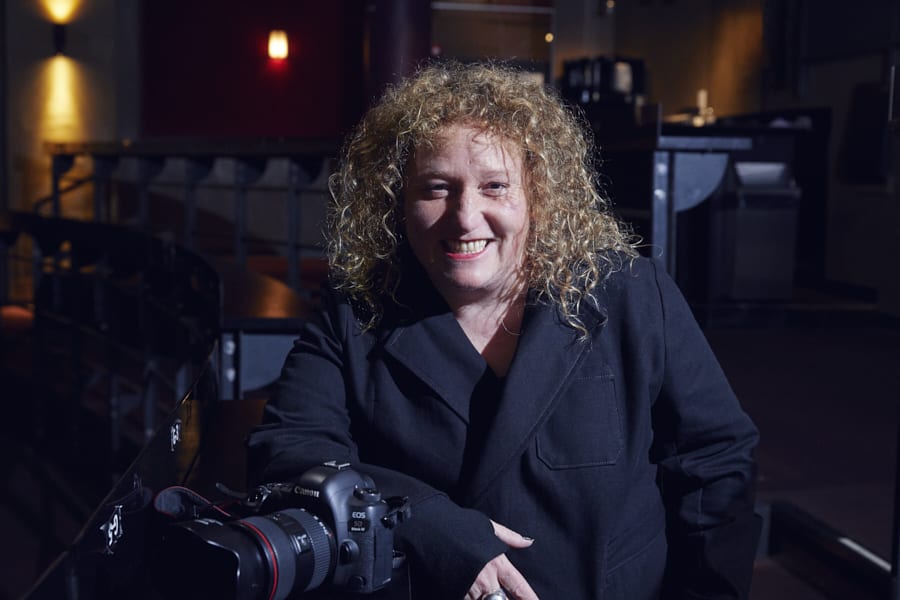 Being a woman in a fairly male dominated industry, do you feel like it has affected your career? Was that a barrier to entry at any point?

I don’t really think like that. But when I started, I was the only woman in the pit. Now there’s tons, which makes me happy. 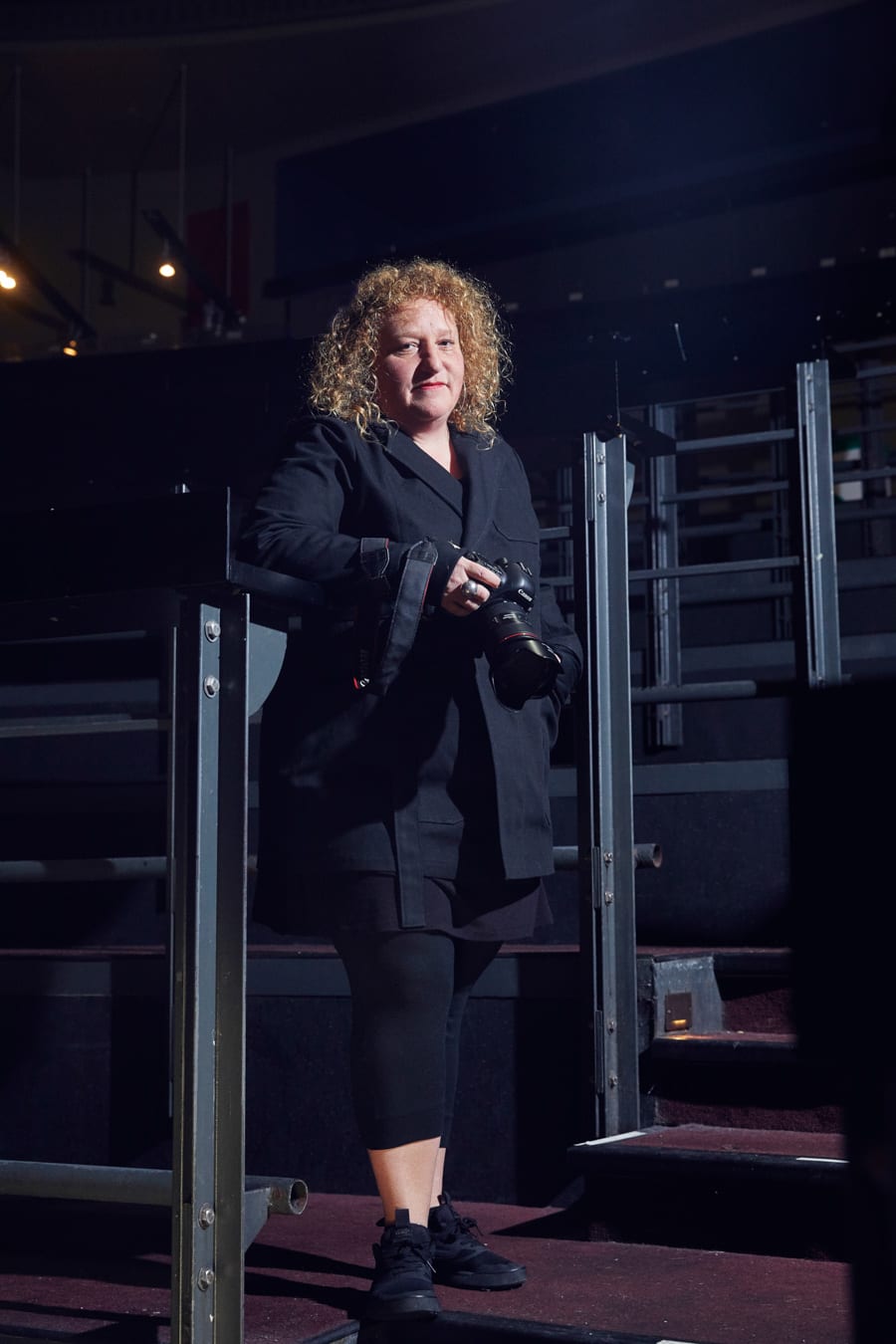 Once I was trying to get a photo of Nick Cave getting out of his car backstage at Osheaga and the door opened and Jack White came out instead! He wasn’t too happy when I took his photo (LOL). Then two minutes later another car pulled up and it was Nick Cave!

Who would be your dream shoot alive or dead? 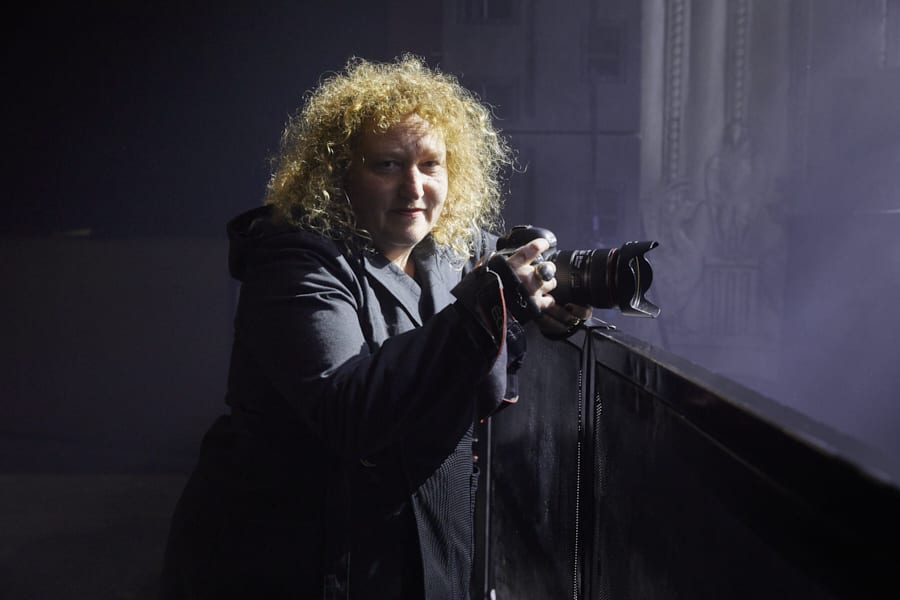 Of all the maker jackets in this series, we made the most custom changes to this one. We used the Robert Kaufman Big Sur canvas in Black, which you can find here from Fabric dot com. We made Susan the mid-length View B and graded between a size 18 (from our 0-20 range) and a 22  (from 14-30 size range) on the bottom. This won’t necessarily work with every pattern, but since she only needed a little extra width in her hips it was an easy adjustment.  We matched up the front and back along center front and center back and used the waist notch as a match point. We made a smooth curve between sizes and adjusted the pocket slightly. We also did a full bicep adjustment which we explained how to do here. When we asked her for modifications we could make that would help on the job, she requested a hood and thumbhole cuffs, since her work sometimes takes her outside in all kinds of weather. 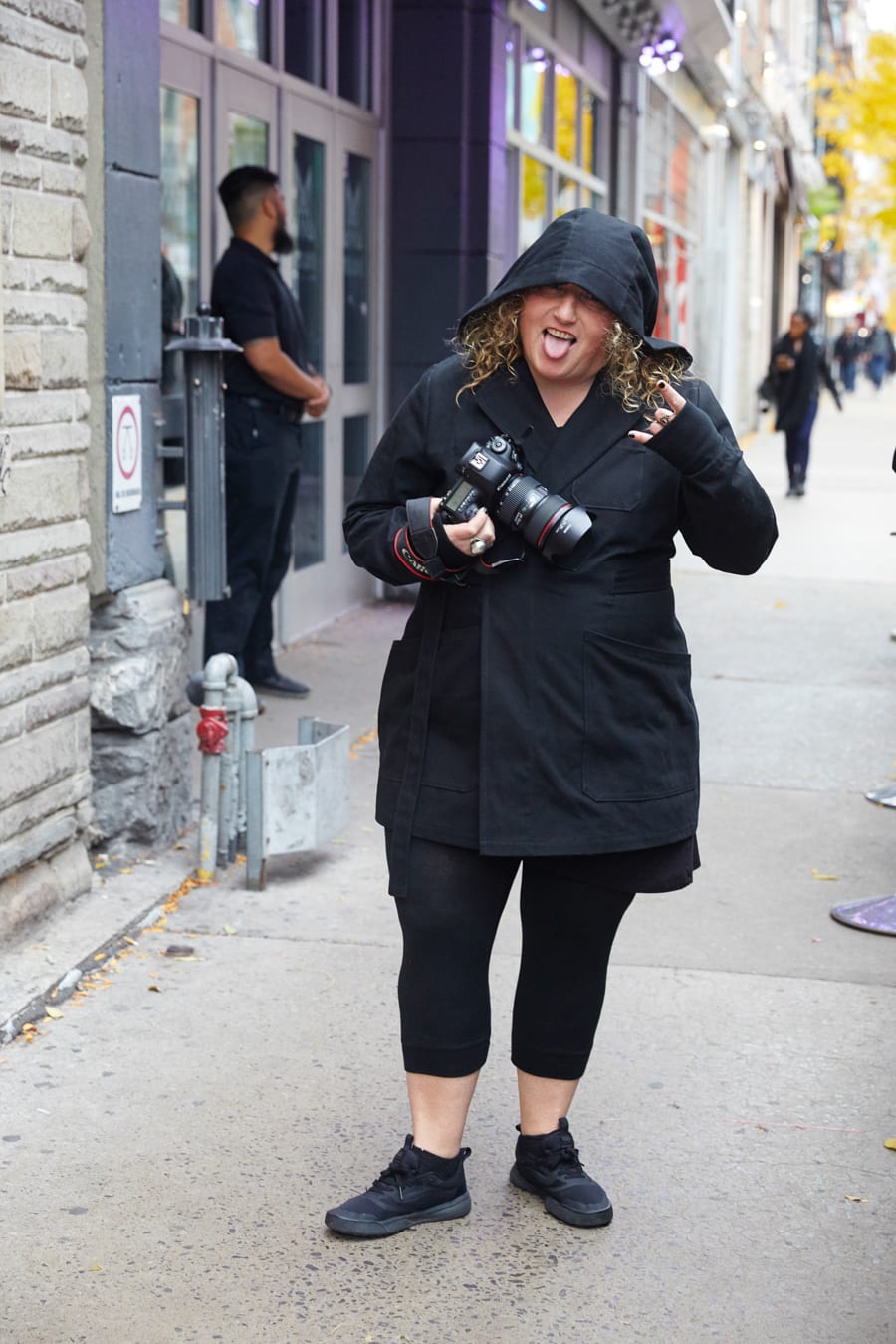 Alexis tackled these hacks by omitting the Sienna collar pieces and using our Kelly Anorak hood pattern pieces instead (though you could use any hood pattern really). She also used this handy (no pun intended) tutorial for the thumbhole cuffs by Hey June Handmade.  For the hood, we measured the seam line of the neckline of the jacket between the inner match points, and adjusted the hood pattern pieces to ensure the finished neckline of the hood would fit within this seam line. After assembling the hood and lining it in a jersey fabric from our stash, she also added a rectangular facing piece of the outer fabric to the inner edge of the hood. She attached it to the jacket at the stage of construction where you would normally attach the collar. 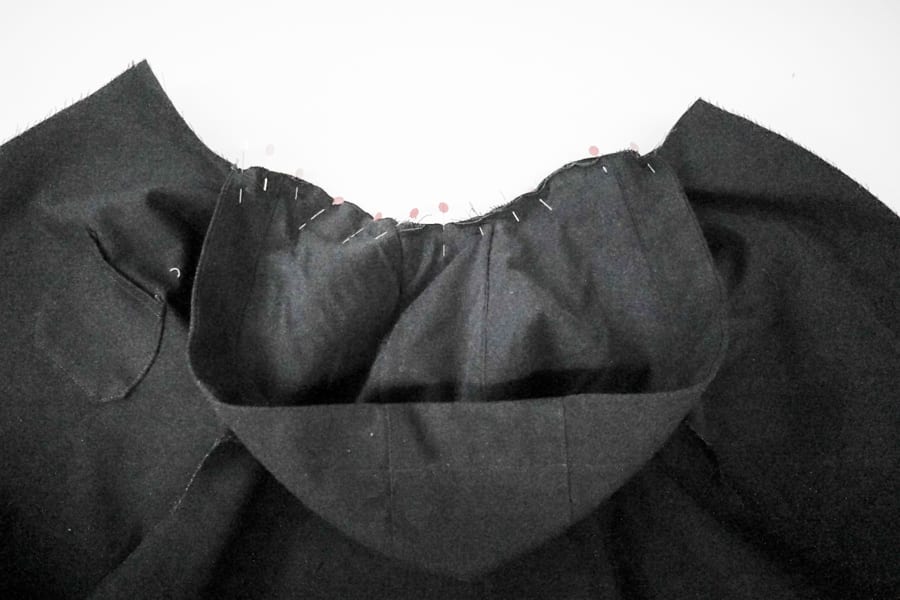 After basting the hood in place along the neckline of the jacket, we attached the facings as per the instructions, sandwiching the hood between the jacket and facing. 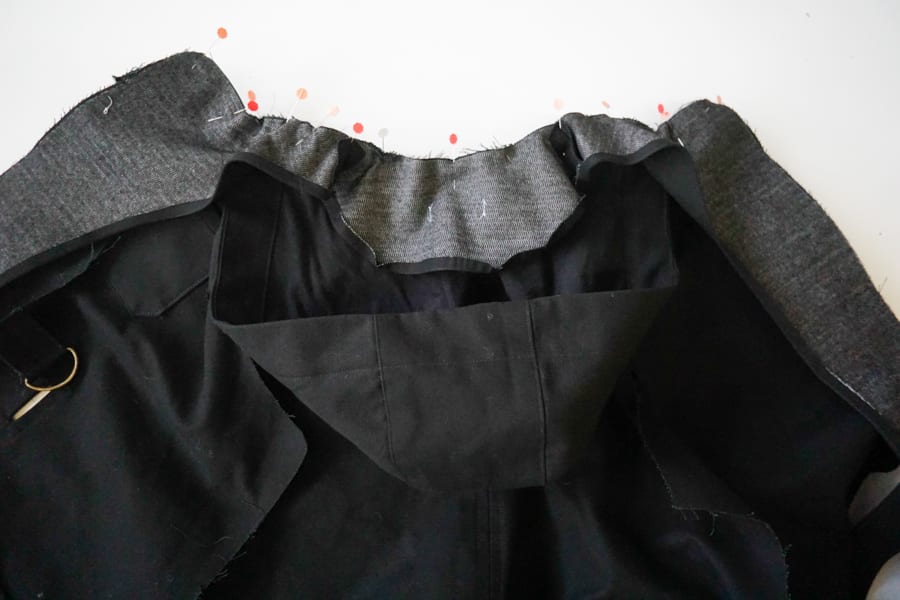 When we topstitched the edges of the lapel, we sewed straight across the neckline of the jacket to secure the hood in place. 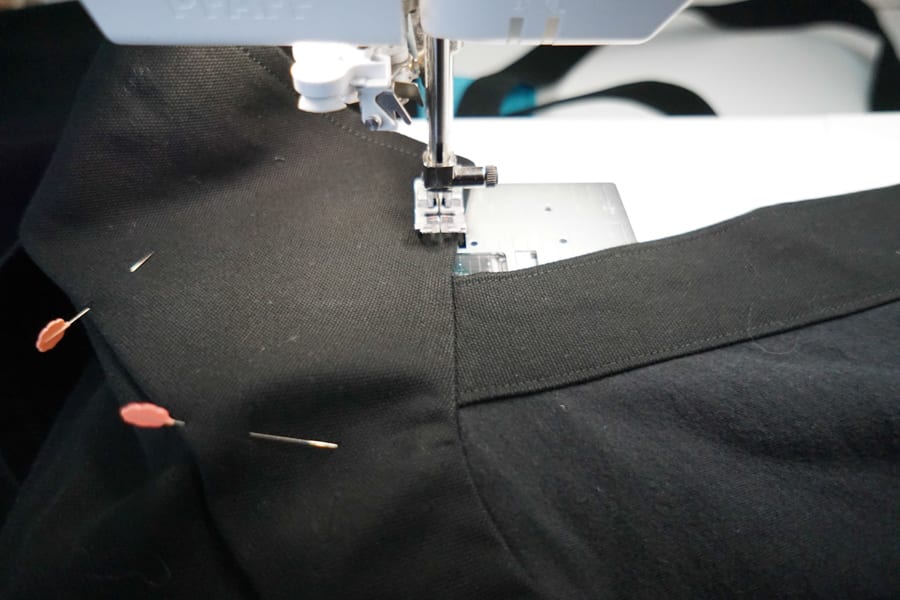 So far so good! This is a great hack since it lets you keep the shape of the lapel. You’ll just want to make sure the hood is deep enough that it looks good when it’s laying flat. 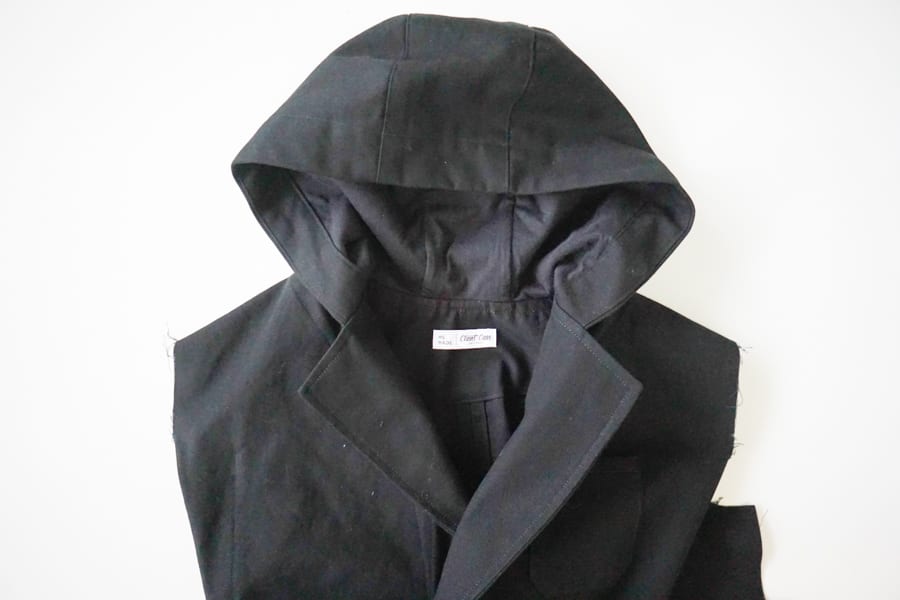 She used a lovely Merino wool (again from our stash) to create these thumbhole cuffs. 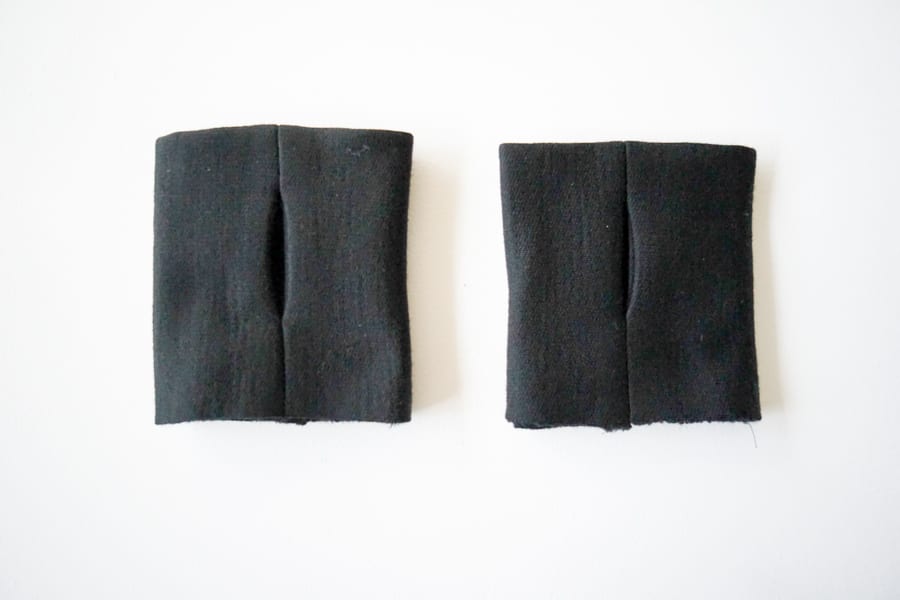 We sewed the sleeves as written in the instructions. 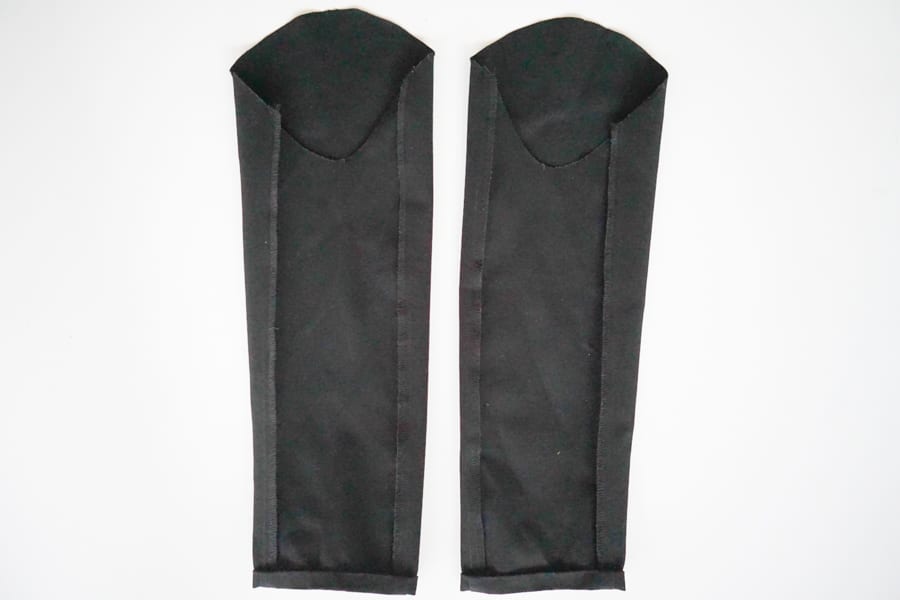 She had to narrow the two piece sleeve a wee bit in order to fit the cuff pieces to avoid having to ease in too much bulk. The cuff of the sleeve was too narrow to fit over the free arm of our machine, so we handstitched the edge of the cuff in place along the sleeve hem to secure instead of topstitching. 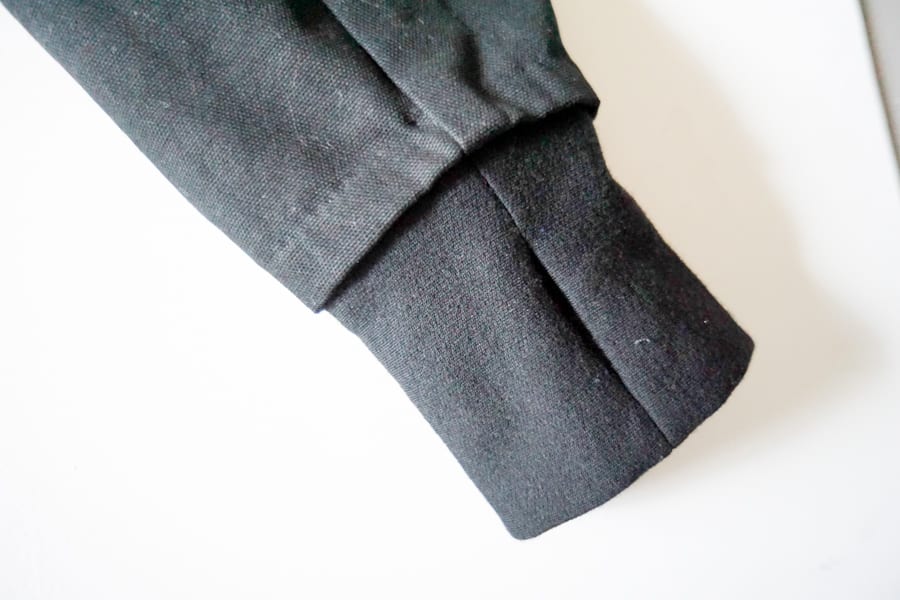 So cozy! The rest of the jacket came together as per the instructions and it was off to work for this jacket! 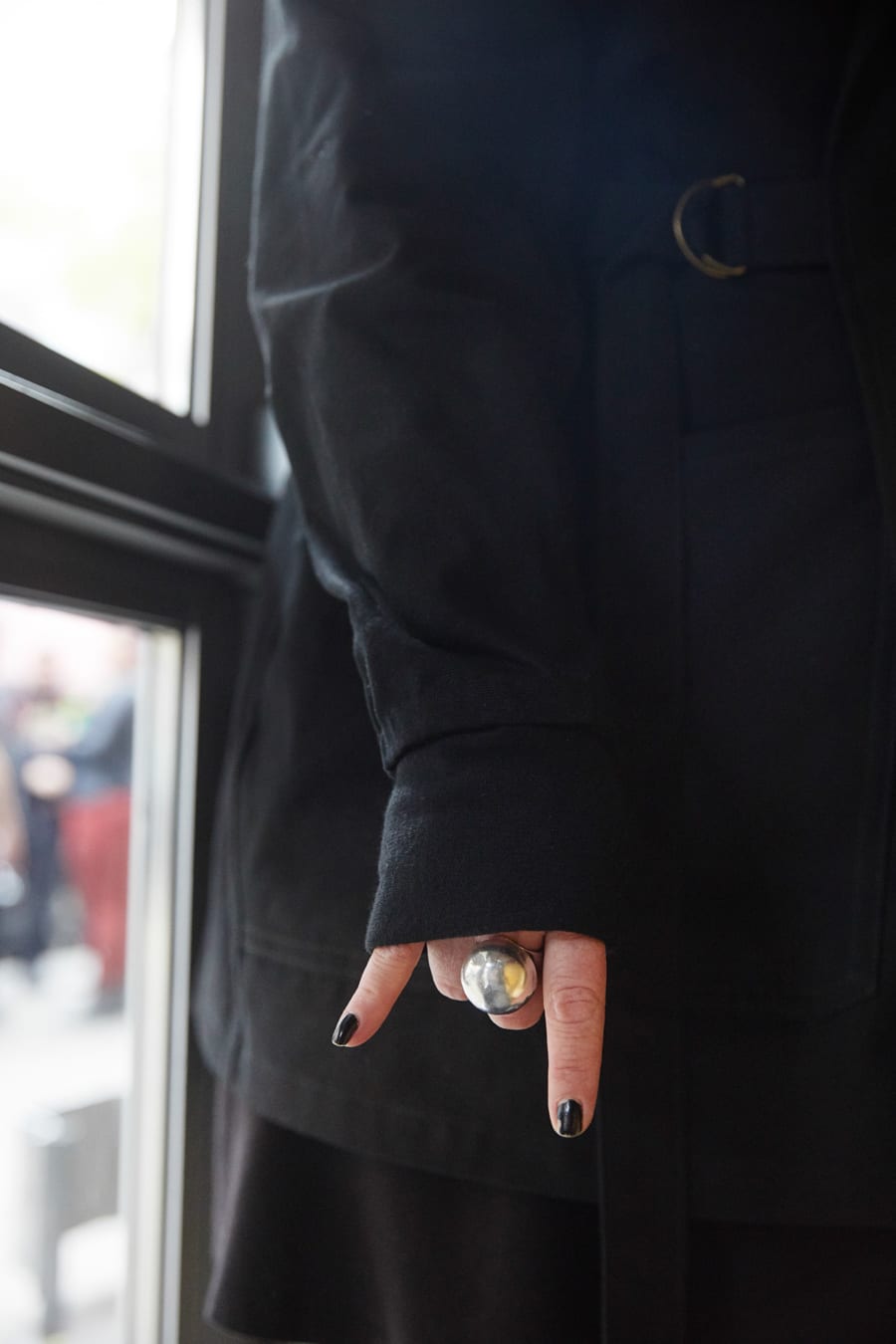 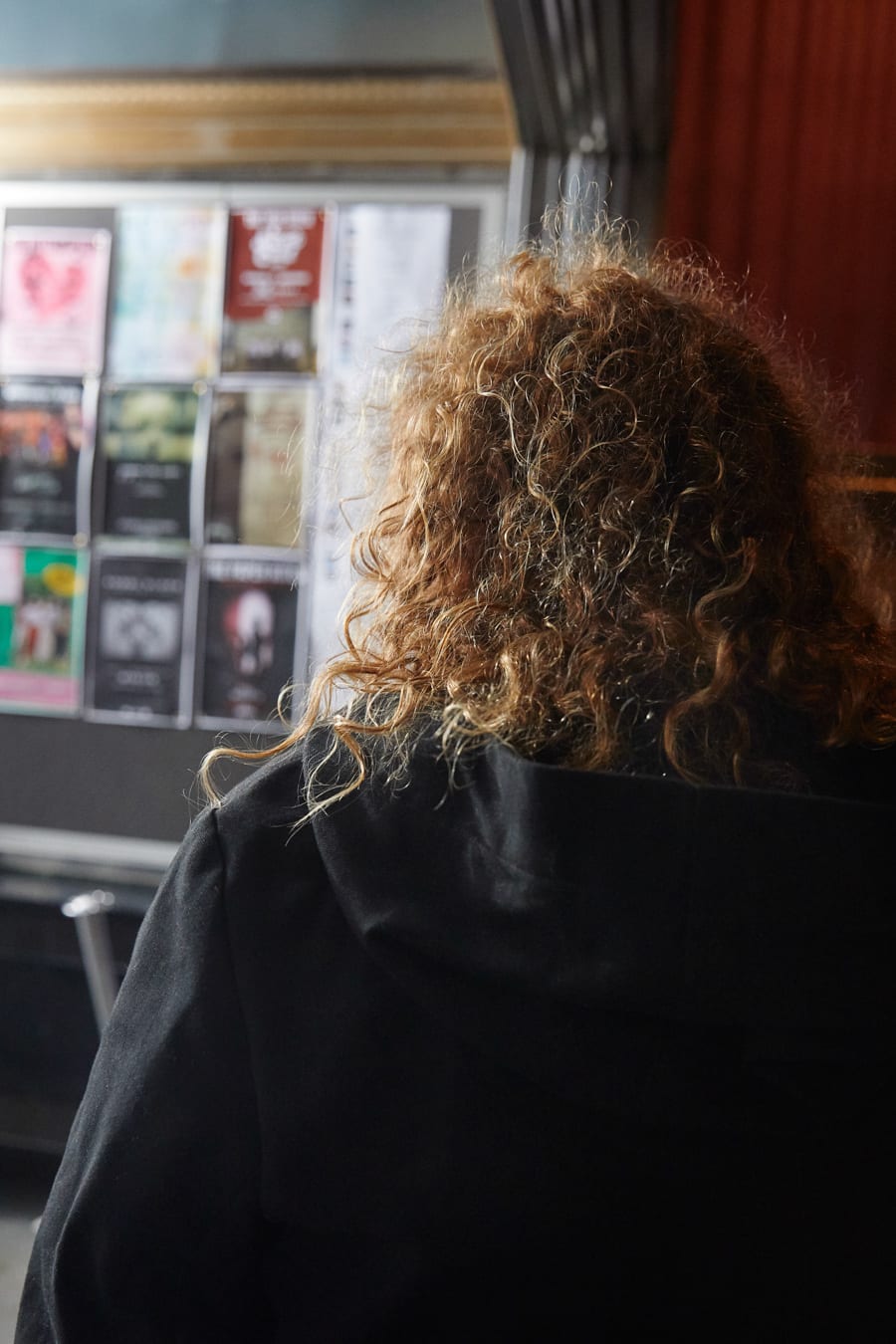 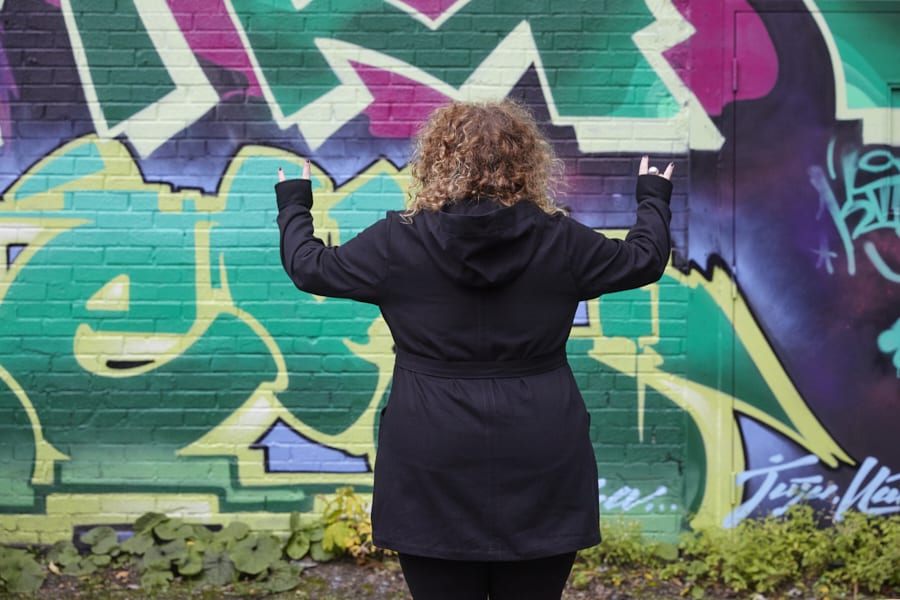 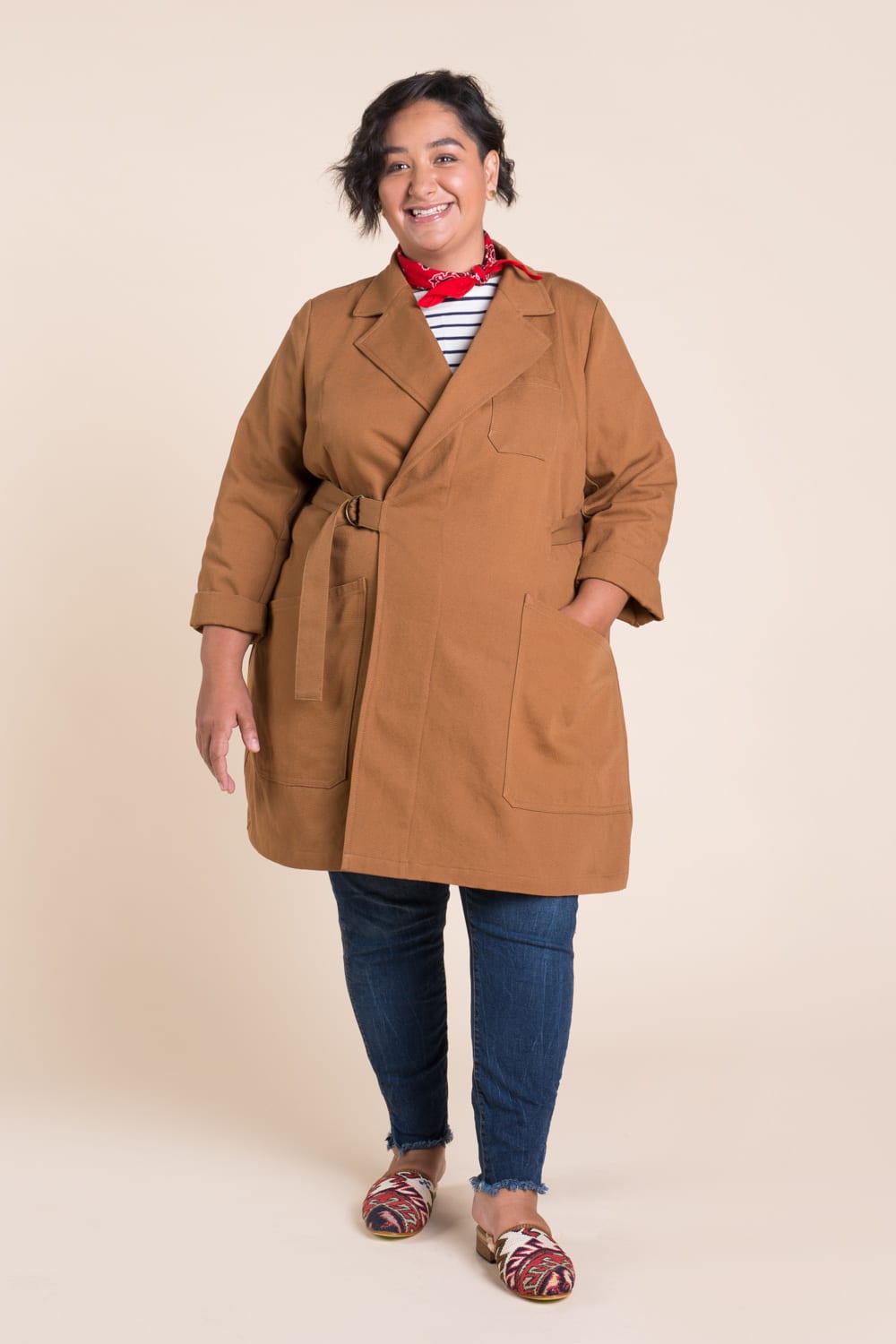