When Knitting Takes Over Your Life 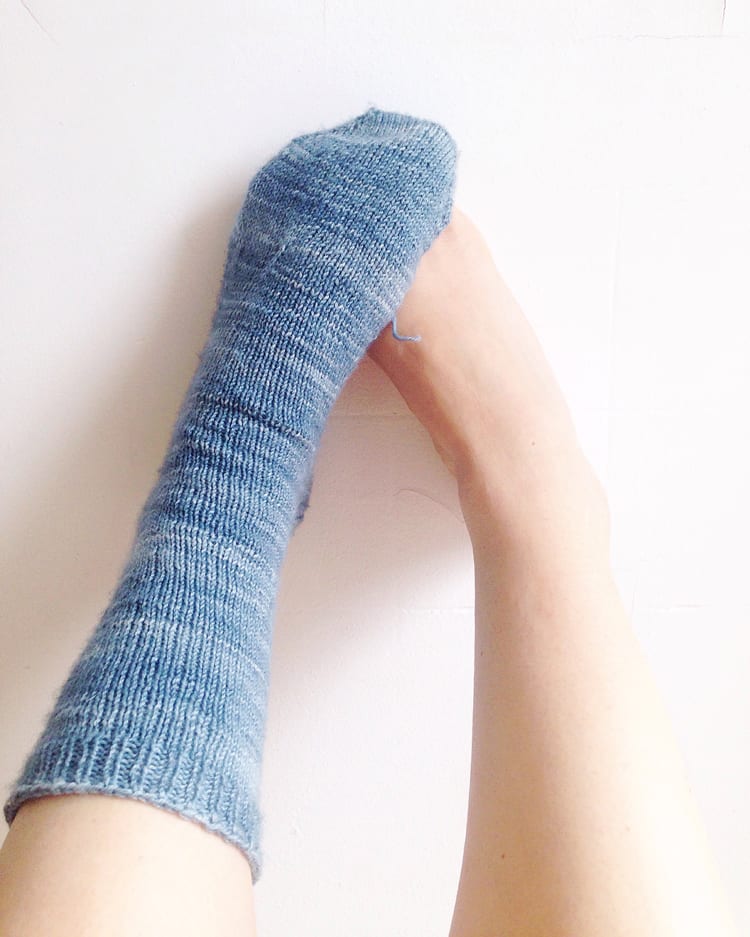 If you’ve been following me on instagram, you may have noticed there is a WHOLE lot of knitting spam happening lately. I’m not exactly sure how this happened, but when I scroll through  my feed these days, at least half of the snapshots from my daily life involve a cup of tea and some knitting needles (the puppy spam will start in a few weeks when Harry gets home, but until then, #allwoolallthetime).

I taught myself to knit back in the early aughts (thank you Bust magazine, thank you Stitch n’ Bitch). I even made myself a sweater in those halcyon days, and while I’ve knit something at least every year since, nine out of ten times it’s a simple and lazy project like a cowl or a Christmas present scarf. I’ve tried starting a couple of new sweater projects since I started blogging, but both are currently moldering in their project bags. The Brooklyn Tweed sweater from last year is the victim of scratchy, ugly wool I finally renounced this fall (RIP itchy charcoal snoozefest), and the lovely silk and merino project from the year before that is a huge billowy beast on 3.5mm needles that is simply too much stockinette at too small a scale.

But a change is in the air, and how! I’ve been on a knitting bender! If knitting was booze I’d be passed out in an alley with my pockets turned inside out. I’d smell like rum with trembling hands and bloodshot eyes. As it is, I’m just more annoying at parties (everyone loves someone sitting and knitting instead of mingling!) and less prone to cuddling because it means more dropped stitches (men just love being supplanted by in-progress sweaters).

I think all of this started in October at Camp Workroom Social. Every night after dinner a big gang of buddies would sit in a circle and knit and it just looked so… nice. Also being surrounded by crafty women wearing  beautiful hand-knitted things for days straight tends to get the ball rolling, so when I got home I started researching projects.

I wanted to make a sweater that would knit up fast so I’d actually finish the damn thing. I settled on the Cross Country Coat from Wool and the Gang, aka the chunkiest chunk ever (15mm needles!!!) and knit the majority of it over a weekend in Vermont. This was an amazing project because it let me feel that sweet, sweet satisfaction of progress and completion after so much start and stopping. 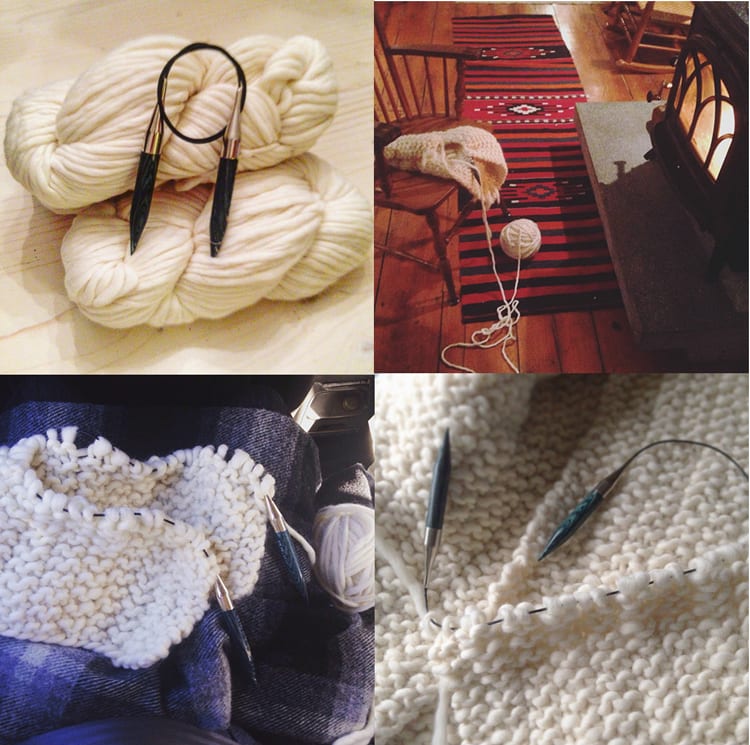 I finished this sweater in December with a little drama, but I’ll leave that story for when I post pictures of it. All I will say about it is cough*swatch test*cough.

Continuing on my chunk spree, I followed up the Cross Country Coat with the James Jacket, also by Wool and the Gang. I juuust finished seaming it and will try and take photos of it soon. It’s a very cool “fashion” piece but I think it will be nightmare to wear under my parka. Sweaty city! 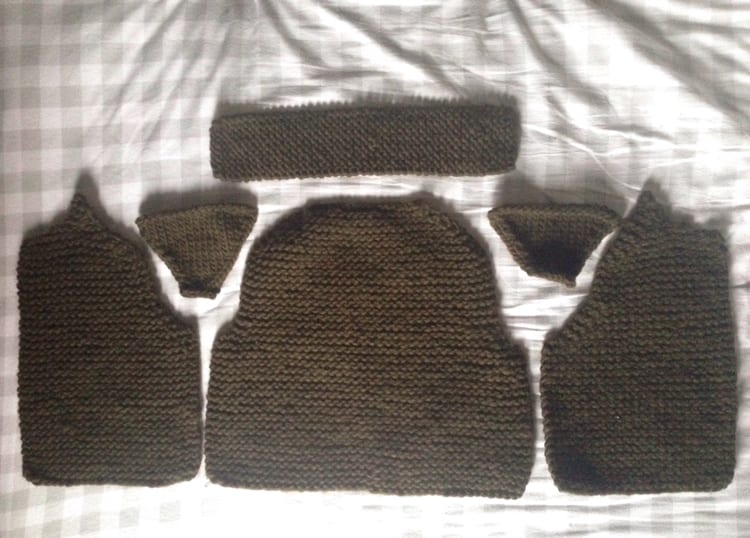 After those two, huge, bulky projects, I was kind of over super chunky wool. I was also feeling super ambitious and knitting-ninja-like since I managed to finish two sweaters in under two months. 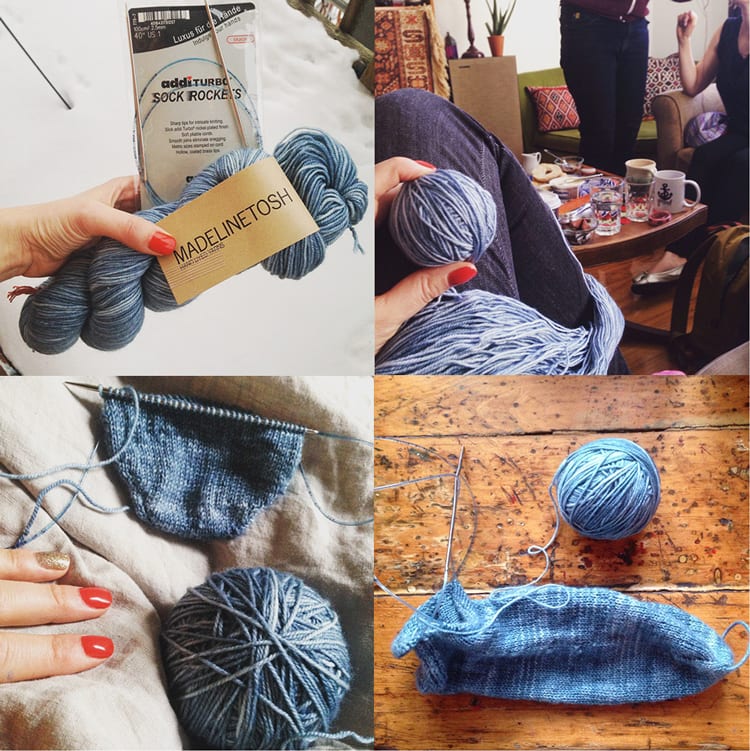 Michelle suggested I pick up some Addi Sock Rocket needles and treat myself to some lovely Madeline Tosh wool and it was pretty much love at first stitch. My knitting game was forever changed by the needles because those puppies are FAST. I’d always considered myself a slow knitter, but I was super impressed with how quickly the first sock knit up. I thought I preferred wood and bamboo because of my propensity to drop stitches, but I think I may be a chrome needle convert, so much so that I just invested in my first interchangeable needle set, this cubic/square shaped set from Knitter’s pride that I have read nothing but good things about. I loved working with this Madeline Tosh Twist (the colourway is Denim) and am planning several more pairs. The patterns I’m using are all from the book Socks from the Toe Up, which also introduced me to the absolute wonder that is Judy’s Magic Cast On Method. Of course the first sock is a little janky, with lots of dropped and later picked up stitches, and weird holes along the increases until I learned how to twist the stitch during “make one” time, but who cares! SOCKS! I’M MAKING SOCKS! FOR MY FEET!

I’m currently working on my second one while waiting on my first order of Brooklyn Tweed yarn to arrive. I’m going to tackle this cabled hat before  I start work on my Snoqualmie sweater; after a lot of amazing encouragement on Instagram I feel confident I’ll be able to do it, and even if I can’t or I struggle, I’ll learn and get better. That’s the whole point, right?

What I’ve learned through this whole process is that my knitting progress was being held back by a combination of poorly chosen yarn and pattern. A good, fast beginner project like some of the WATG patterns are great to get your feet wet and your confidence up before tackling more ambitious projects. And the honest truth is that after a full day working and making samples, the last thing on earth I often want to do is stay in the studio and keep sewing (the perils of making sewing your day job). I’m not sure if it’s just a phase or the time of year, but I’d much rather be curled up on the couch with the Bachelor ((#teamJubilee)) and a lap of yarn than just about anything else these days. Who’s with me?!

Tell me about your knitting journey! What are you making these days? TELL ME ALL YOUR KNITTING SECRETS.