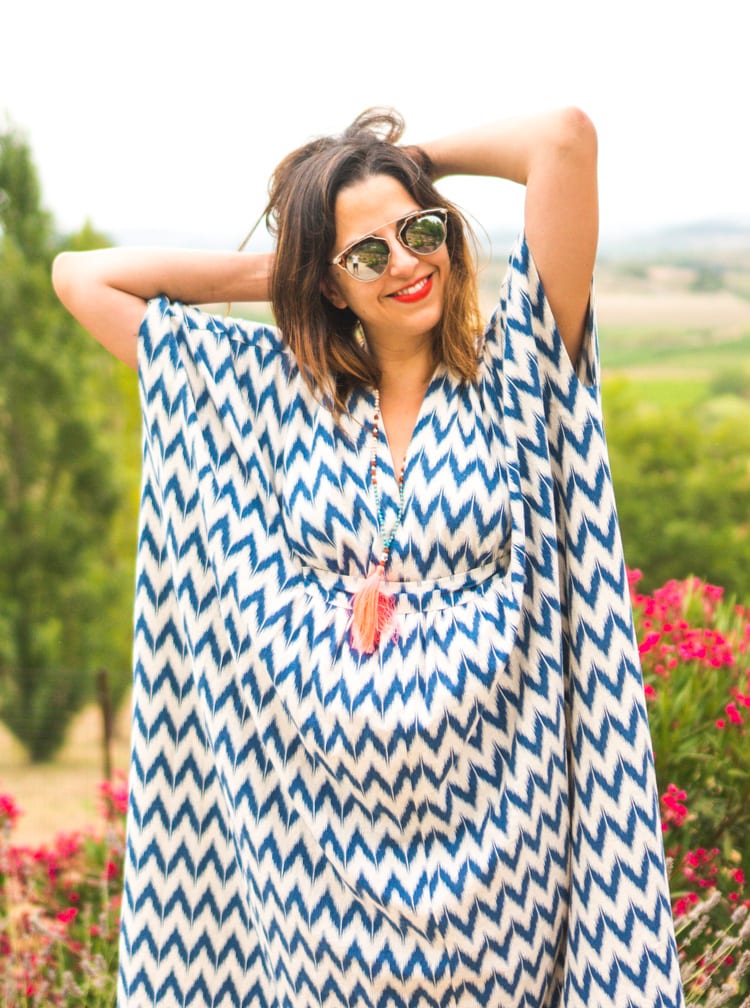 You know how magazines always write those “20 Things you Absolutely Must Have in Your Closet to Qualify as a Human Woman with Any Value” articles? And it’s always like, a beige trench and a white v-neck? I will concede that both of those things are “practical” and “useful”, but what these magazines fail to understand is that sometimes what I really want in life is to be encased in a fabric cocoon. I don’t want basics. I don’t want realism. I want an extravagantly printed, borderline excessive linen statement piece that requires a pool and a bottle of rosé to function.

What I want is a caftan. 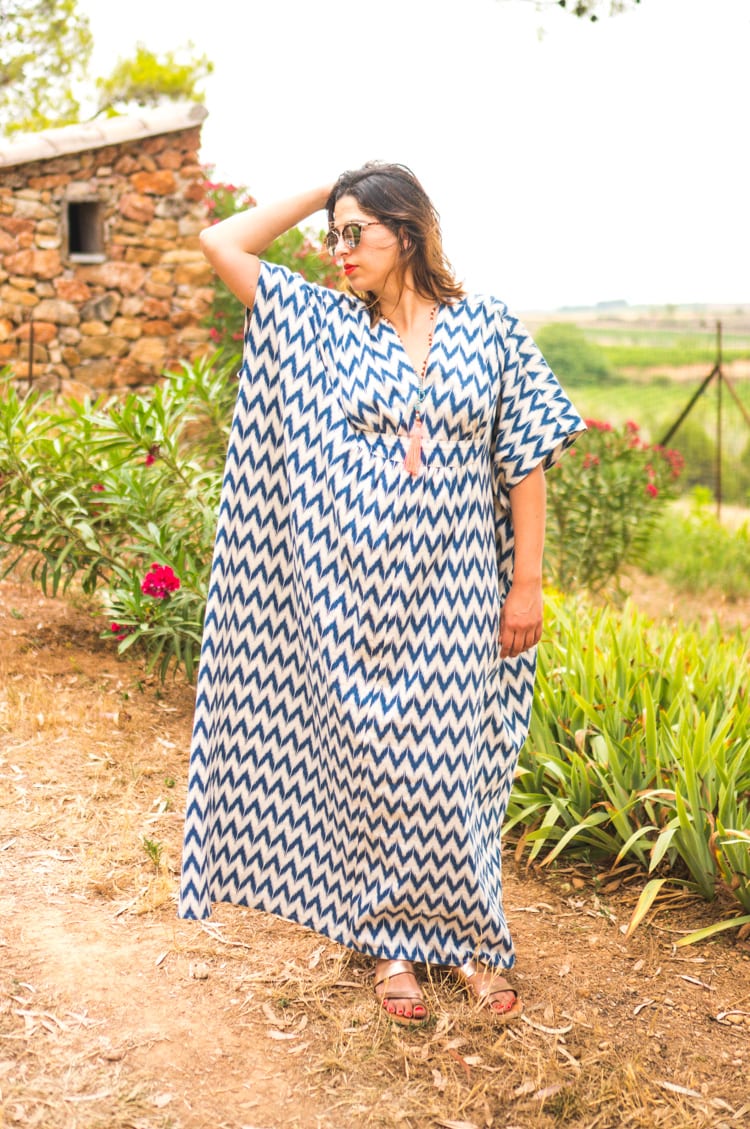 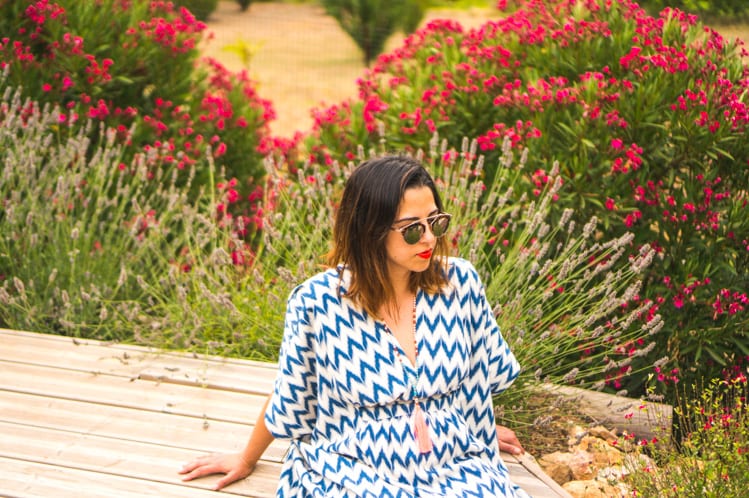 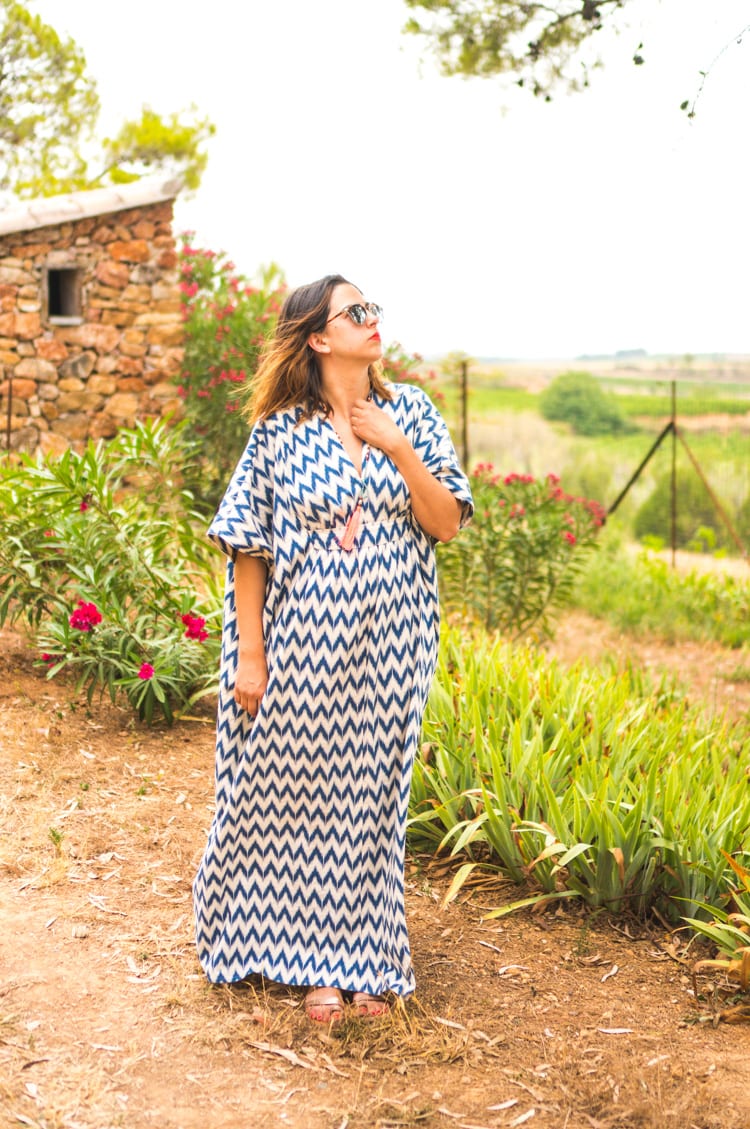 It’s kind of hard to understand how such a voluminous amount of fabric (which conceals nearly every little bit of skin) can be as unequivocally glamorous and chic as caftans are, but life is full of mysteries. They emit confidence and attitude. They say, “Look at me! But not at any of the body parts you’re used to seeing. Look at who I am. I give zero f*cks about the male gaze. I am wearing this for me. See me? DON’T I LOOK FABULOUS?”

Basically, it’s my kind of feminism embodied in an actual garment of clothing. 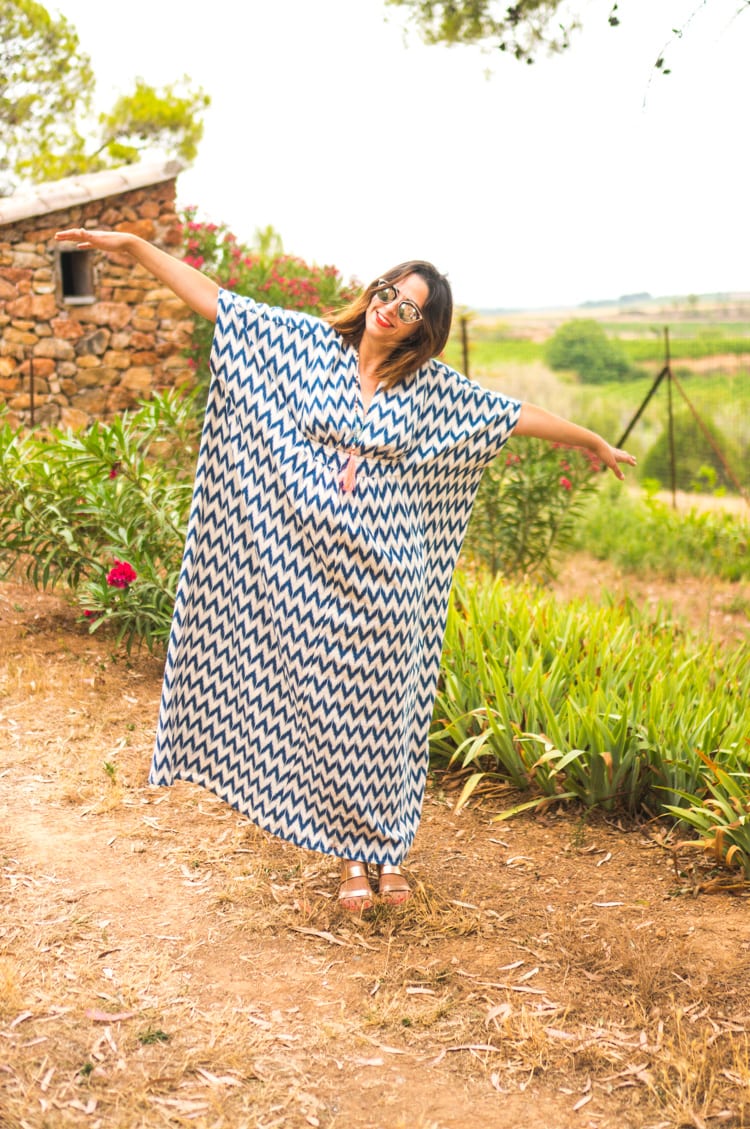 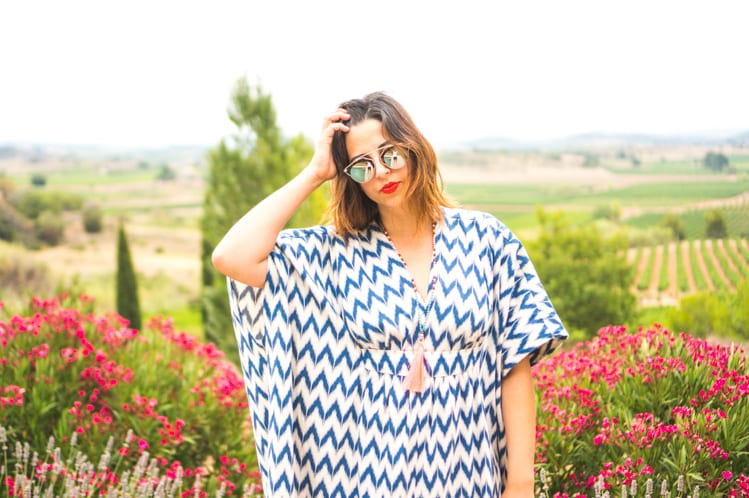 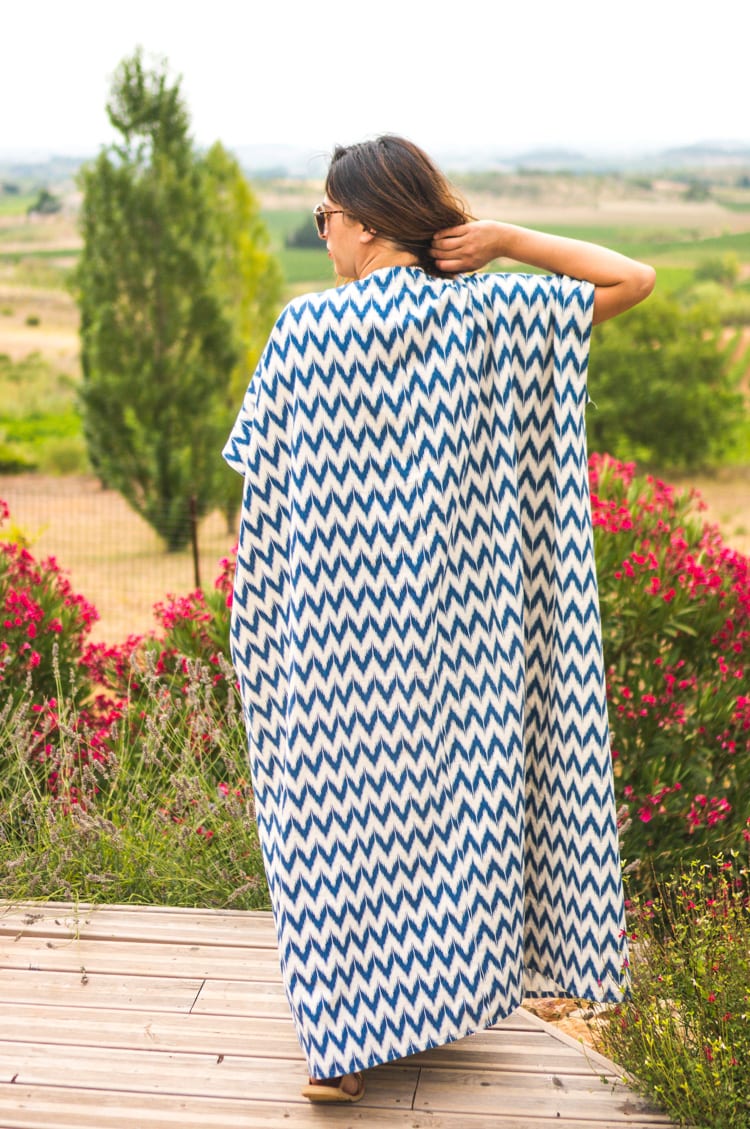 As you may know, I headed to Europe for a much needed vacation this month. Guillaume grew up spending summers in the south of France so we flew in for some intense family time followed by a few days on our own in Barcelona. I wanted desperately to pack the perfect “summer in Europe” capsule wardrobe, so I feverishly sewed up a few new things to bring with us. This caftan was  the first thing on the list; I wanted something glamorous I could hang around the pool in which that would also protect me from the sun. As I’ve gotten older I’ve become a little paranoid about getting too much sun exposure, and a caftan is basically the most effective sunscreen ever.

I wanted something with an exuberant print, so I was lucky to stumble on this medium white and cobalt zig zag print at Tonitex in Montreal. It’s got quite a lot of body, and while it’s maybe not as lightweight as I would have liked, it still kept me cool since it’s made of the universe’s gift to bodies, linen. While I had lots of noble plans to draft a caftan myself, I just didn’t have the time, so I dug out Simplicity 5315, a vintage pattern I’ve been meaning to make for a while. The design is pretty awesome. While it’s essentially a giant rectangle of fabric, it is gathered at the bust and tied inside the dress under the bust and around the back to create some bust shaping, so you’re not just swimming in a huge sack.

Like most vintage patterns, the instructions were completely wack-a-doo. I kind of winged it as a I went along and spent a lot more time finishing the insides than directed. The collar and arm openings are finished with a facing that I topstitched down from the outside to secure, and the rest of the seams are serged, except for the facing under the bust which was entirely handstitched from the inside. The only thing I wish I could change is the print matching along the shoulder seam, but I was a little short on fabric so I just made do with what I had.

It was a relatively quick make, although I didn’t get a chance to make the super lightweight white linen version I was planning as well. There is always next summer…. 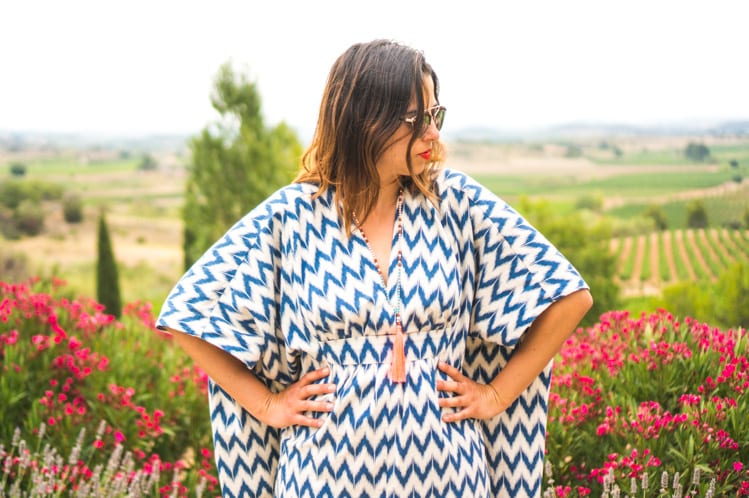 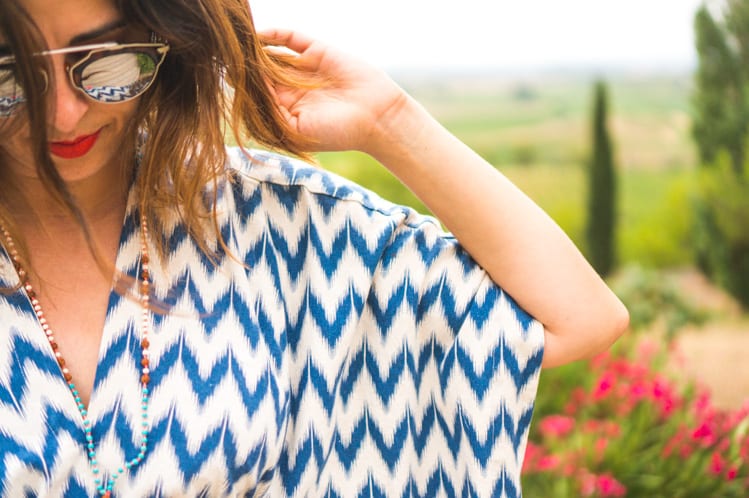 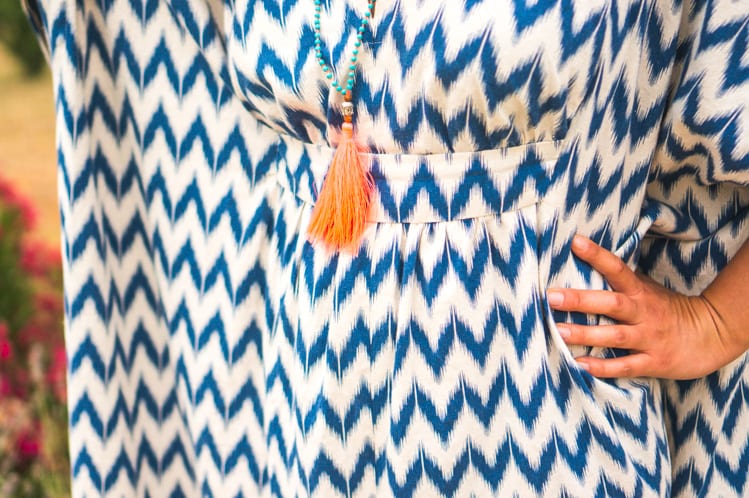 I was thrilled to pull this one while we were visiting Guillaume’s aunt and uncle in Languedoc. They bought an old stone house and have spent the last few years turning it into paradise on earth, with incredible views of the valley, a huge pool and landscaping and terraces that made me constantly feel like I was in a really, really good movie. I love France and French families. The entire extended clan (almost 20 of us) spent an entire week together almost non-stop, eating beautiful simple meals (always accompanied by rosé and finished with mind blowing cheese) , playing petanque (the French version of lawn bowling) and laying in the sun or swimming in the pool. It was was a serious dream, and I am so grateful and lucky to have fallen in love with someone with such great vacation options 😉 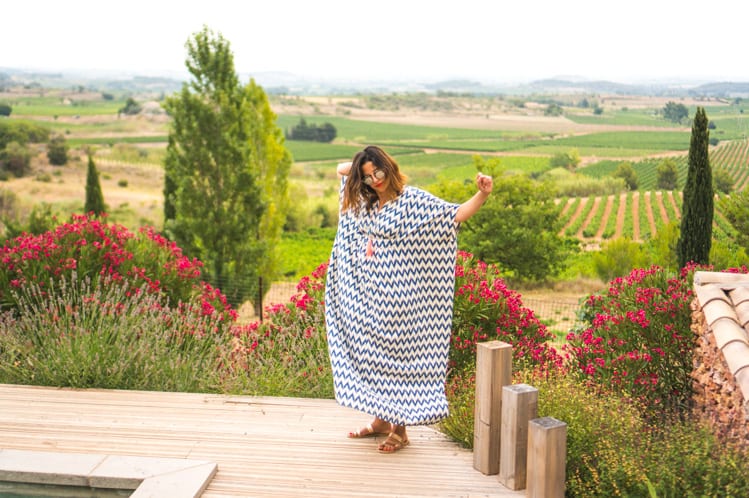 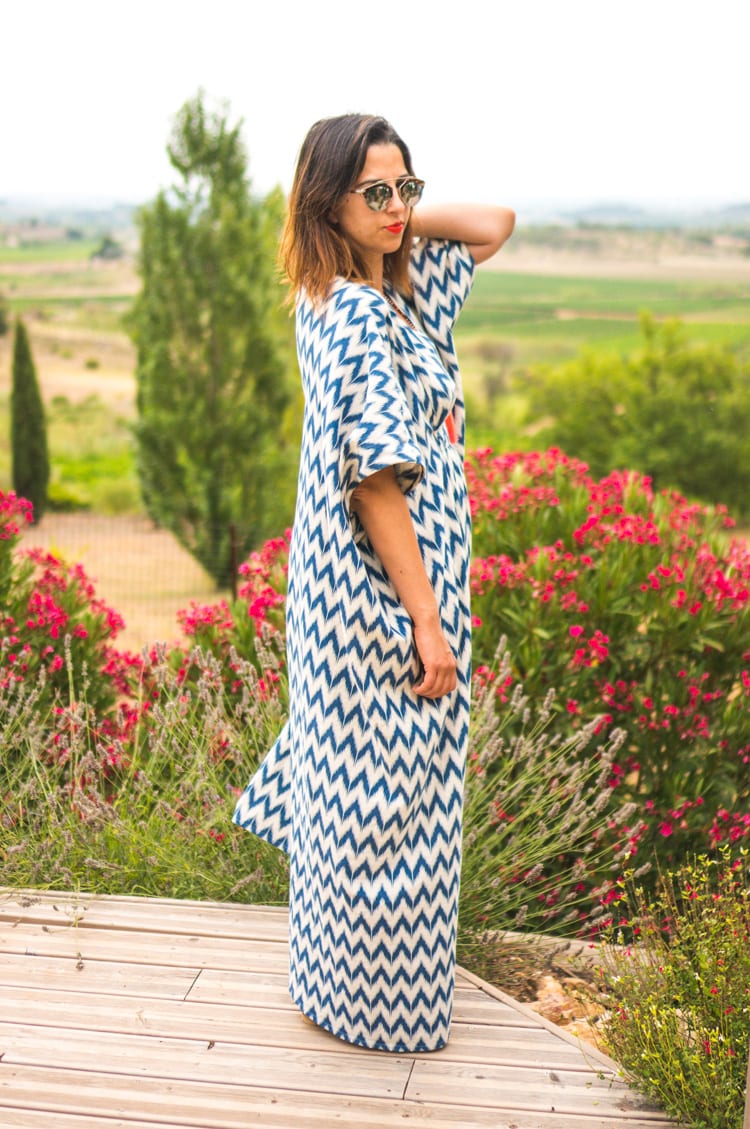 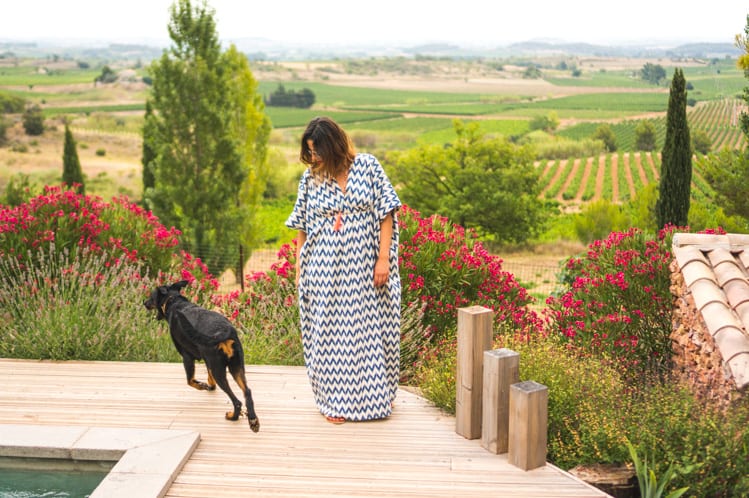 Needless to say, this caftan was the perfect thing to bring on our trip. My mother in law wore one as well, and we decided we’re going to start a Caftan Cult. Caftans and rosé are the only membership requirements.

So, do you agree a caftan is just as necessary to the modern woman’s wardrobe as a basic white tee? Have you ever rocked one of these babies? Should I design a pattern next summer so we can all rock caftans together?