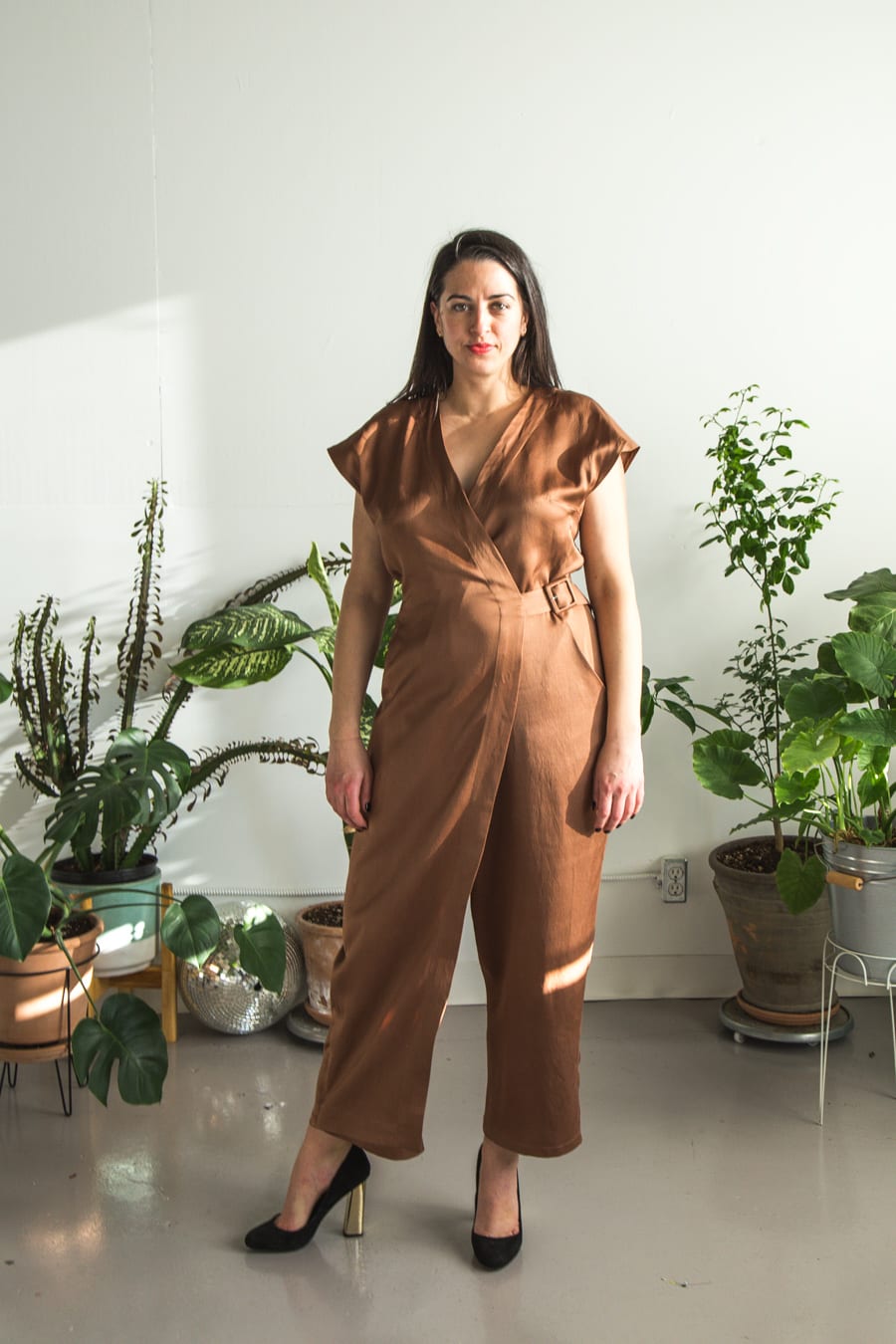 A thing you should know about me: I am obsessed with Rachel Comey. Hands down one of my favorite independent designers, her work is constantly inspiring. It’s artful and unexpected, with cuts and proportions you don’t see anywhere else (I highly suggest reading this profile or listening to this podcast to learn more about her). One of my favourite things to do in New York is wander around her Soho shop and lovingly fondle all the beauties and try on all the shoes, which is not nearly as stressful as you’d think given how friendly and welcoming the staff is.

Since her clothing is pretty far outside my budget, it fills me with joy that she licenses some of her designs with Vogue Patterns. I read somewhere that the licensing doesn’t generate much income, but that she loves home sewing so much she’s happy to share her designs with people who may not otherwise be able to enjoy her work.

Swooning, Rachel. You are making me swoon.

I collect her patterns every time a new one is released, and have made up this fabulously weird dress, this iconic skirt (one of my favourite skirt designs ever) and this quirky dress. There is always a unique detail or sculptural element, something that makes it feel idiosyncratic and one of a kind. So, it’s not much a surprise I basically dropped everything in my life to work on Vogue 1645 this winter. Somewhere between a wrap dress and a jumpsuit, it’s got all the hallmarks of classic Comey. After seeing makes by Erica and Mimi, I knew it had to be MINE. 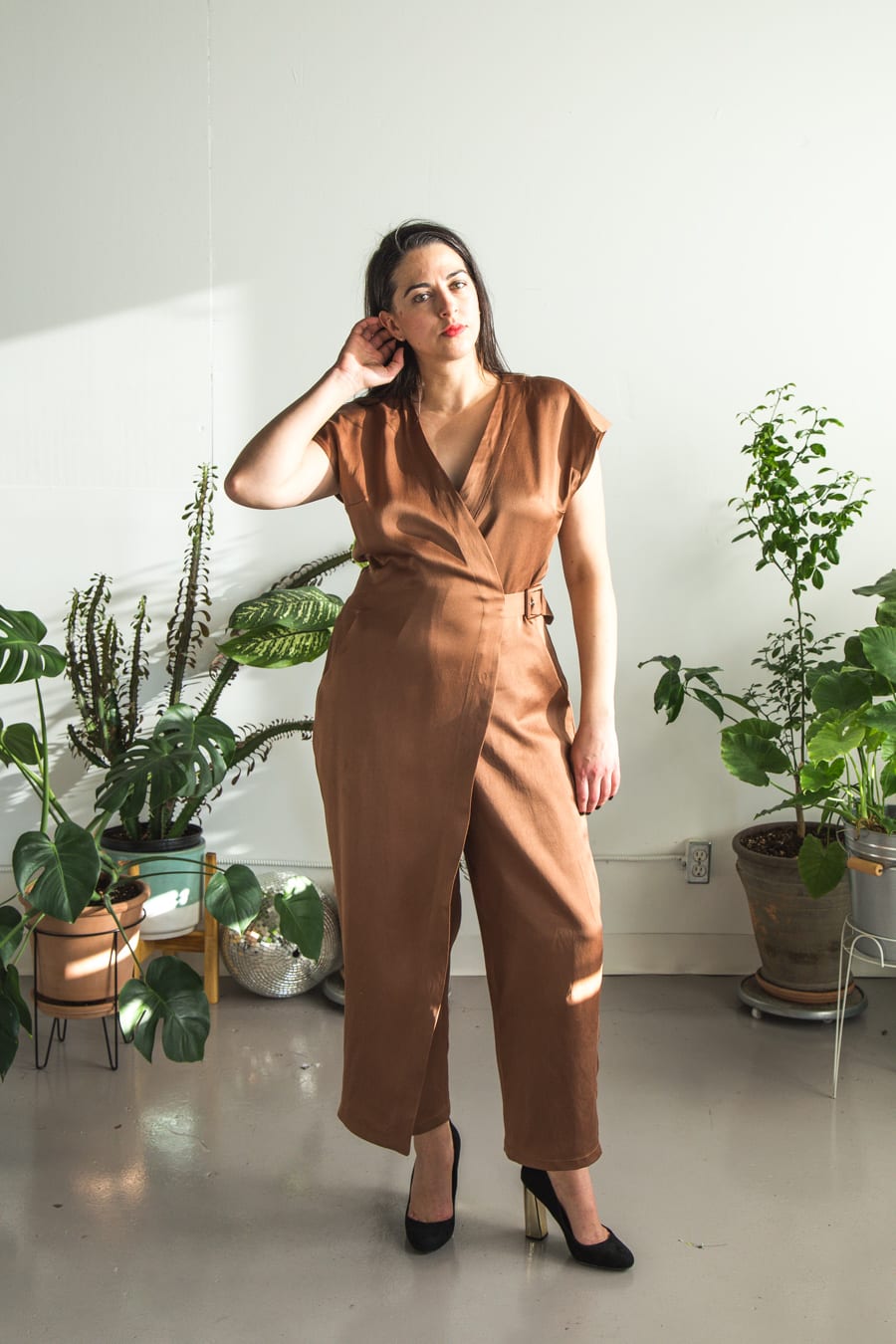 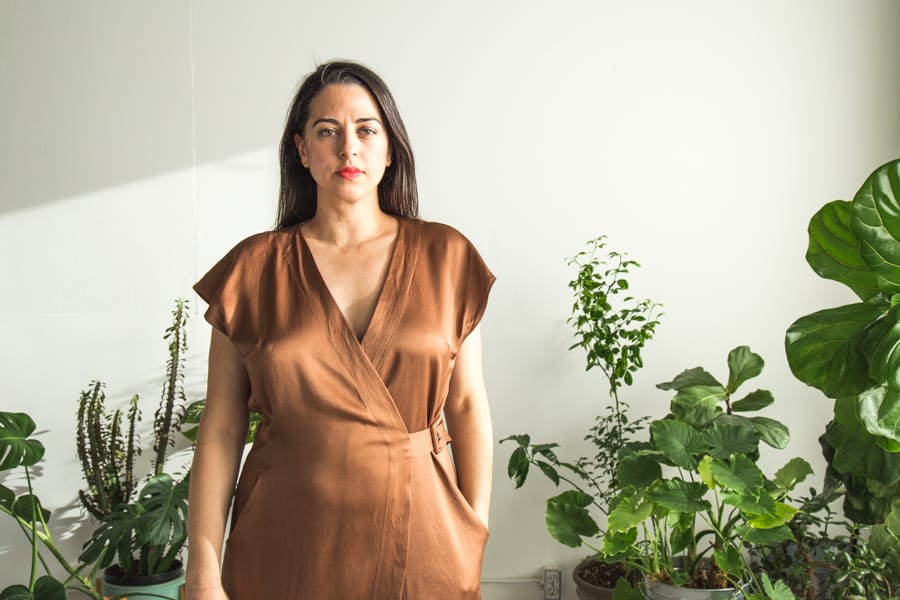 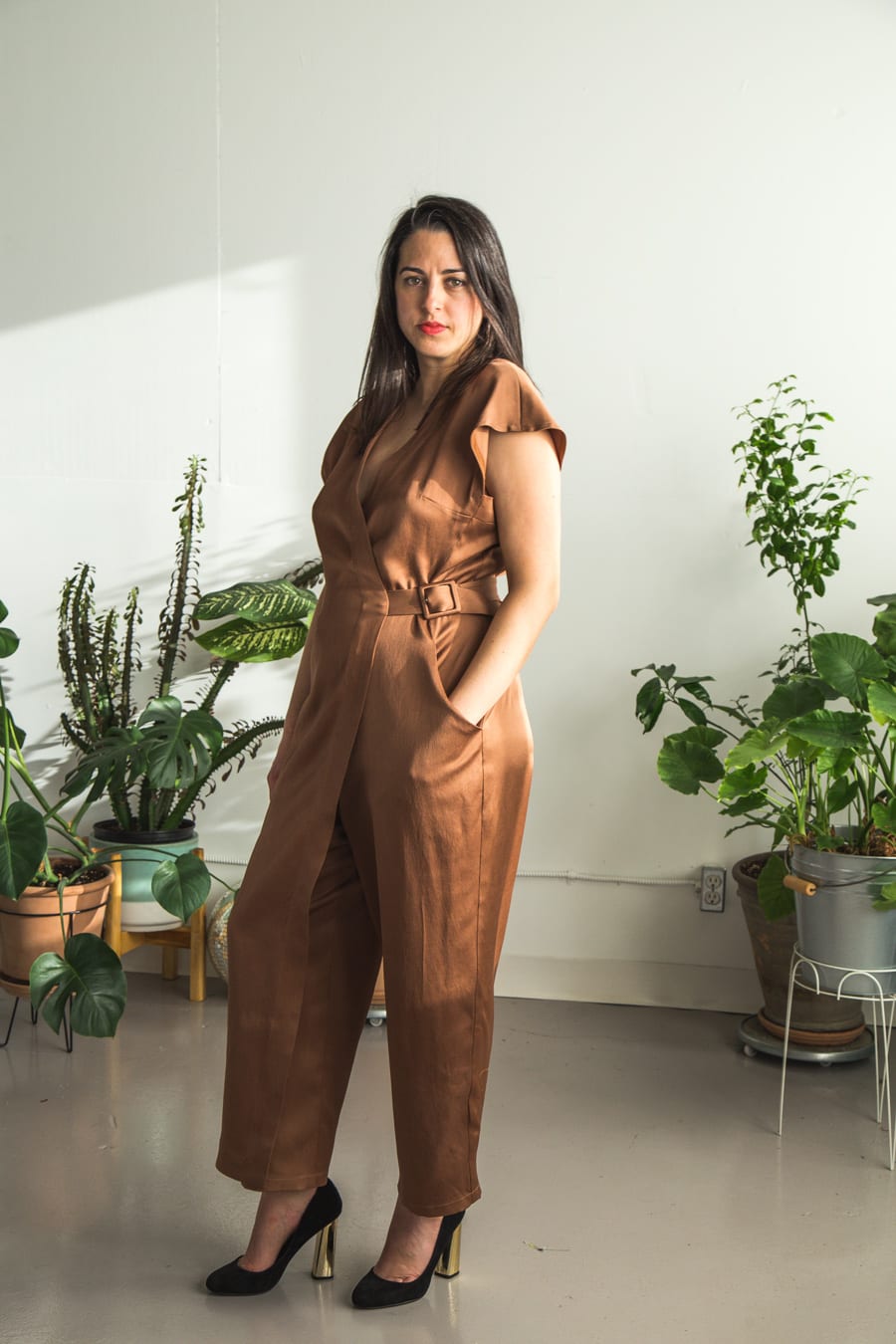 I picked up this glorious brown silk in Paris on my couture tour. It’s got a lovely, hefty weight, with enough structure to hold up to some of these details but enough drape to feel like I’m wearing liquid toffee. I’ve been gravitating towards these earthier shades lately; I think of them as shades of Ebony, my sewing bestie who somehow always manages to make brown look like the most exciting colour you’ve ever laid eyes on.

I’m not gonna lie – this jumpsuit was a REAL JOURNEY. The construction is a bit bananas with that overlap, and I am so so so happy I made a muslin first since it let me figure out the best way to put it together. I ended up paying the instructions half a mind, since I thought there was a more logical way to assemble things, but I had a lot of empathy for whatever technical designer at Vogue had to write these instructions. The construction of this would have caused a lot of hair-pulling if we had to figure it out here in our studio.

I made the large size, which fit decently through the body but needed a lot of tweaking. Wrap dresses are kind of my bete noir in that I always need to remove tons of length through the center front to prevent gaping. Here I removed a wedge across the bust and ended up having to rip apart the nearly finished jumpsuit at the end to remove even more through the shoulder (one day we will release a gap-free wrap dress: it’s my mission!) On all the finished jumpsuits I saw, the armhole looked dangerously low, so I raised the band under the arm over an inch, in addition to raising the dart which fell a bit low on me. It’s still a bit ripply across the bust, but I suspect it was because of how often I had to rip out the facing when I kept missing the edge while topstitching. Thankfully this silk was pretty sturdy and handled all that seam ripping like a champ. 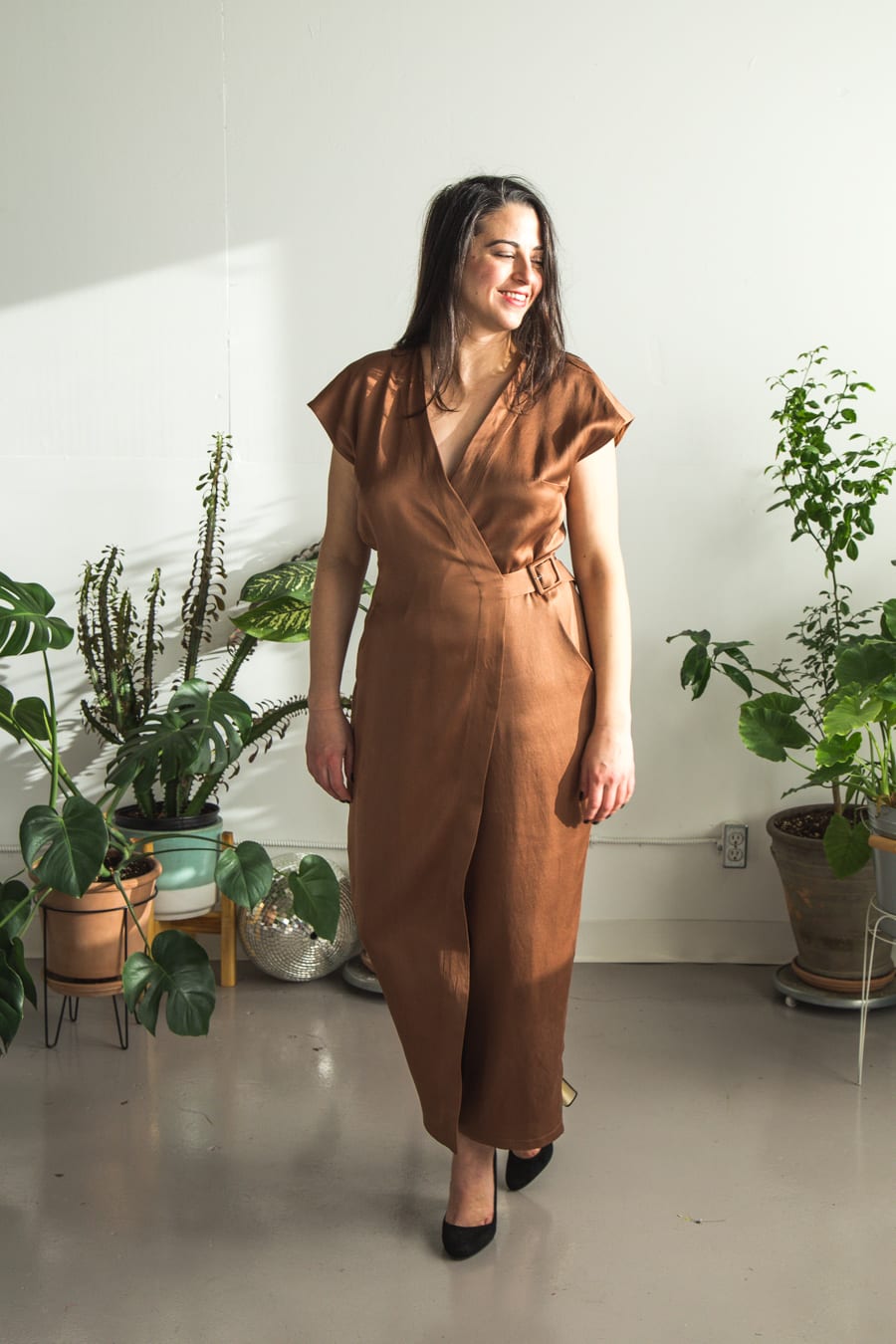 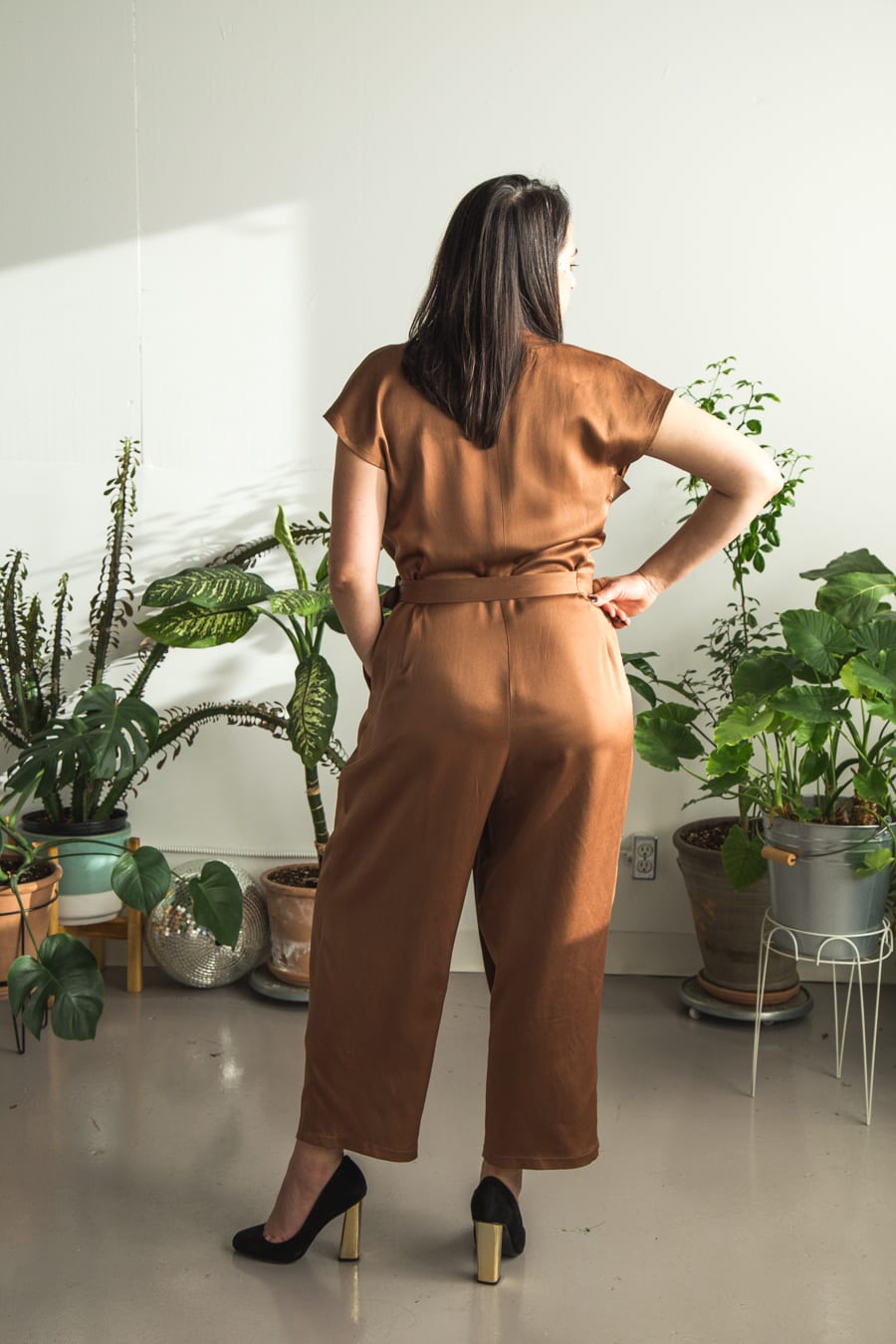 The insides gave me the most consternation. Since my focus this year is on quality, I was committed to finishing the miles of seams with bias bound silk. It was a lot of work, but I am happiest when I have a long, involved project to work. I spent a few weeks off an on with this project, finishing a seam here, a pocket there. I found a pretty meter of patterned crepe in the stash for bias that perfectly complemented the silk. My biggest regret was the width of bias tape I made – it ended up being super narrow at less than a 1/4″, so it was super tricky to sew to sew and I ended up having to go over it several times in places to make sure the seam was fully enclosed. Lesson learned: always use the 3/4″ bias tape maker, not the dreaded 1/2″! 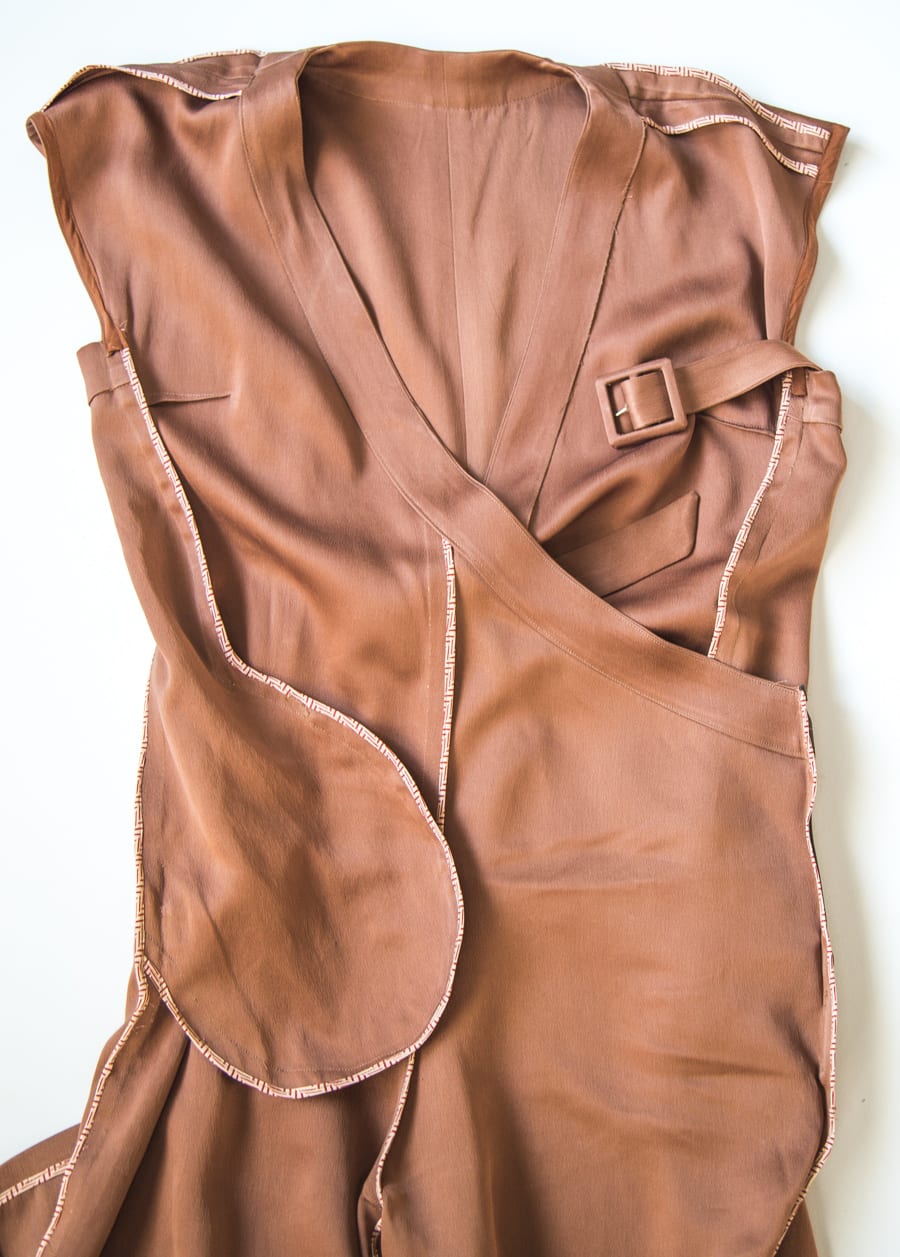 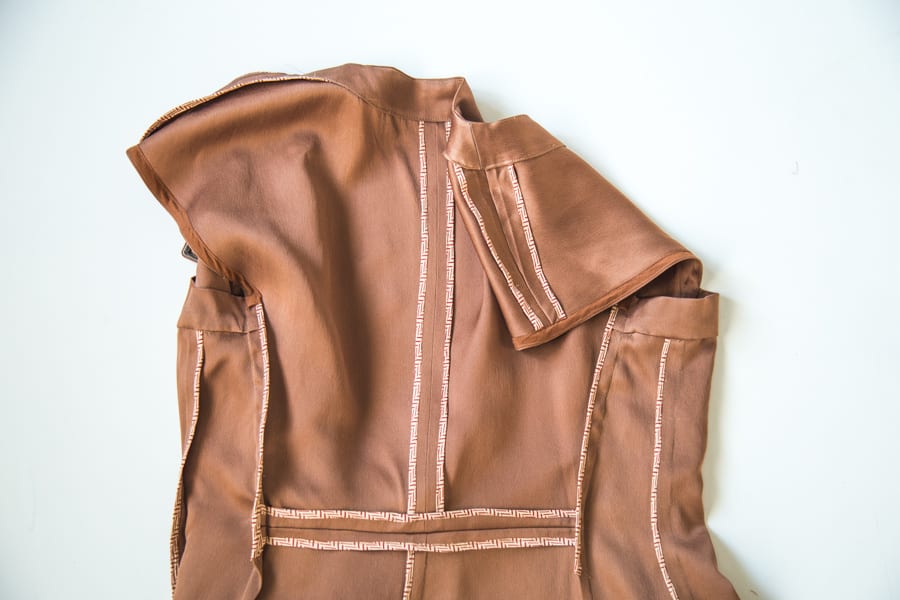 I didn’t have enough fabric to cut out the armscye facings (it was a real squeaker when I cut it out) so I used a  bit of silk voile. It’s a bit janky where it’s attaches to the seams but you can’t tell from the outside so I’m not going to lose sleep.

The funnest part was making this pretty fabric-covered belt buckle. I’ve never used one of these buckle kits before but it was pretty easy to do and I love how cohesive it looks with all the hardware in the same colour. 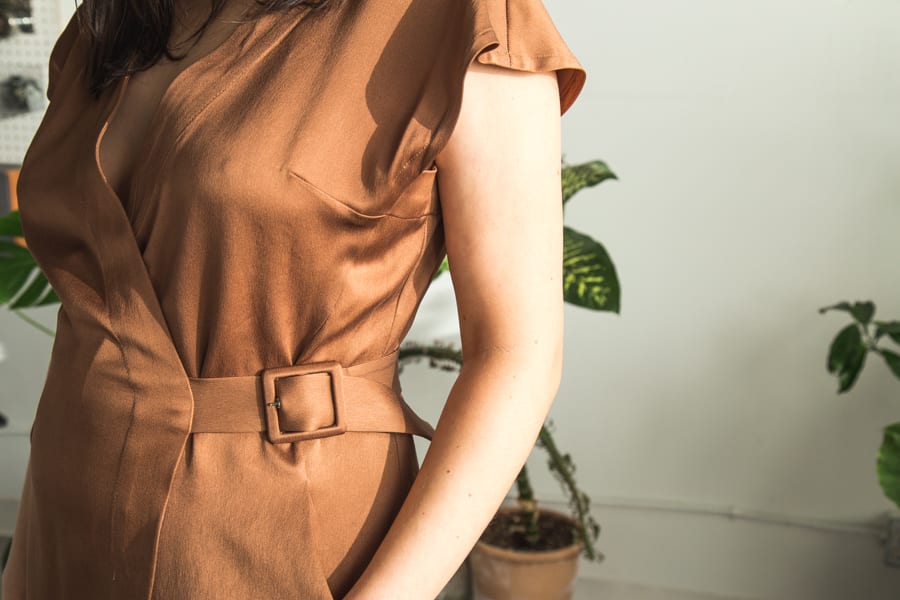 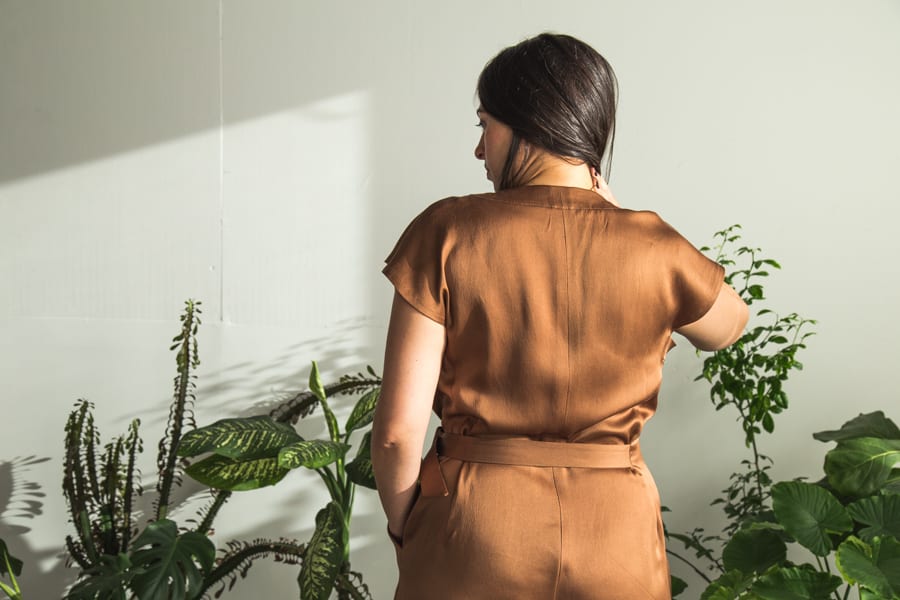 I ended up wearing this on New Years and it somehow managed to survive having white wine poured all over it (by me, ahem). I love wearing silk but I hate the inevitable watermarks; this silk must be woven with some kind of witchy spell because you can’t even see the wine damage. I’m also happy it doesn’t wrinkle nearly as much as you’d think – must have something to do with the weight, which I suspect is a 4-ply crepe. I’m hoping to wear it next weekend for my birthday, sans bra, since I couldn’t find a bra that didn’t end up peeking out.

What do you think of this wacky jumpsuit? Anyone have any Rachel Comey sewing tales to share?