A Coat for the Ages: My Pendleton Wool Oslo Coat 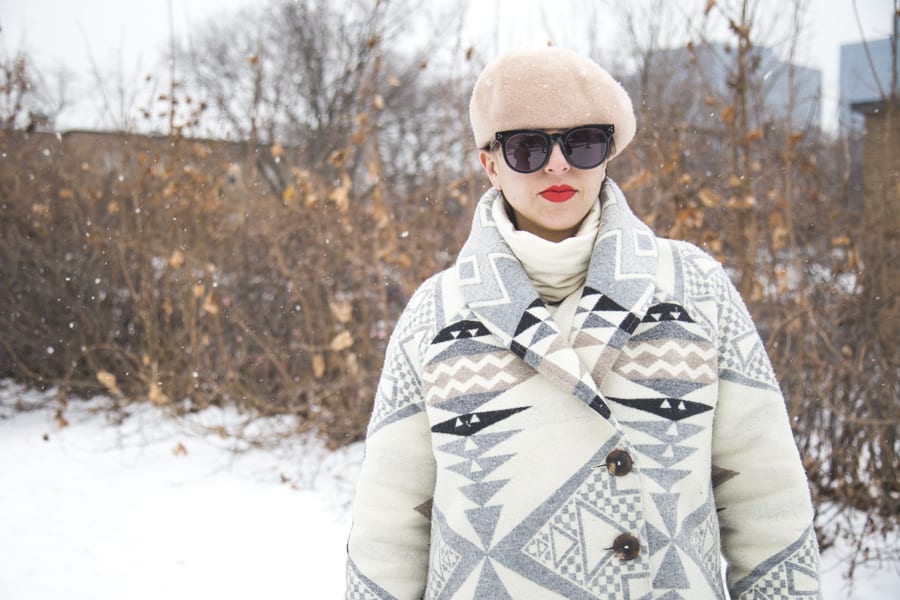 Dreams do come true. After sixteen freezing winters in Montreal, I’ve finally discovered the secret to a beautiful and seriously warm coat that is not, in fact, a parka. A parka, while functional, is incredibly depressing to put on every day from December to March, and every spring I have to fight the urge to burn mine in some kind of pagan ritual cleansing, just to dispel the memories of wearing it for 4-5 months straight. The secret my friends? THINSULATE INTERLINING. And a gorgeous, beefy wool from Pendleton, the wool of dreams. 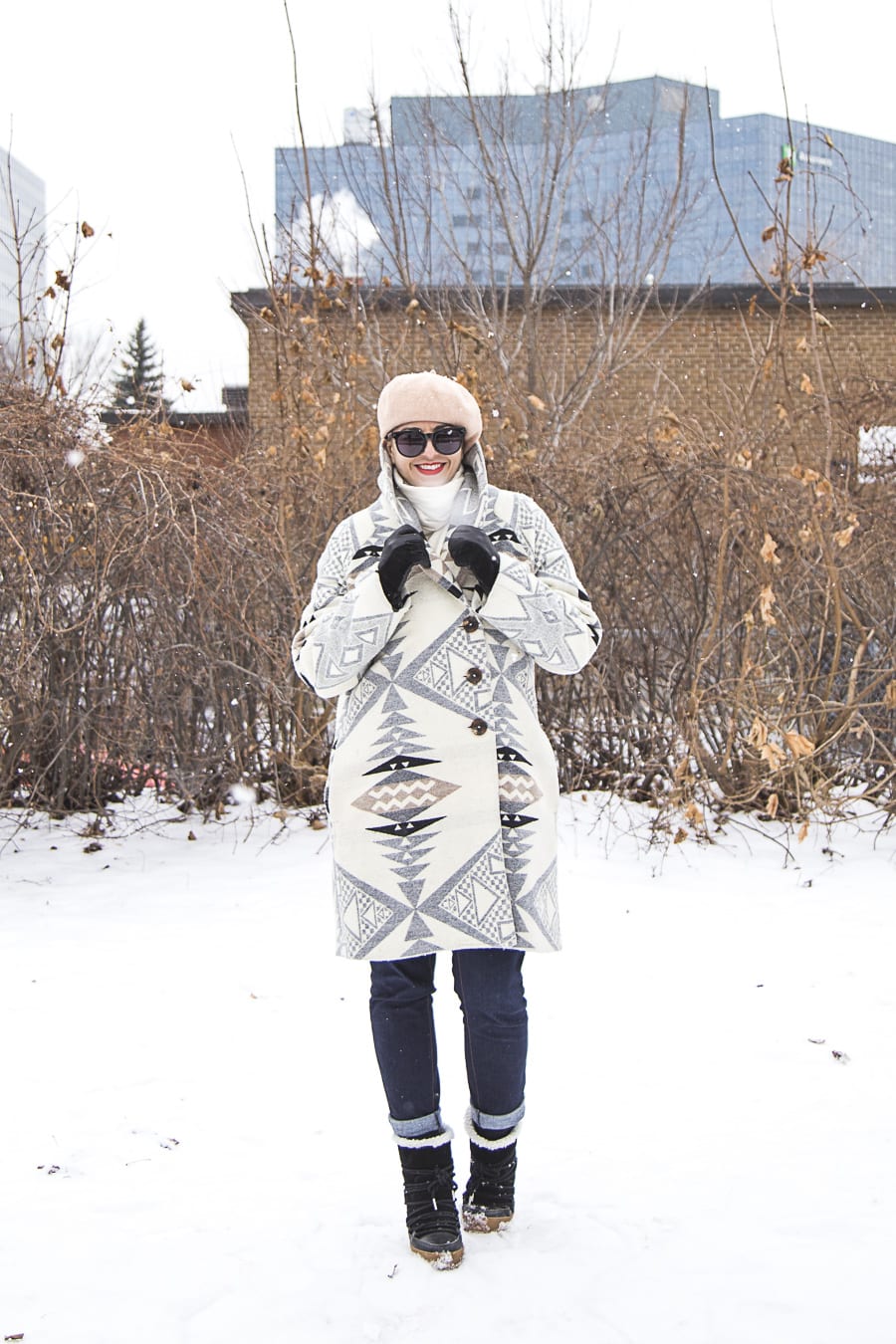 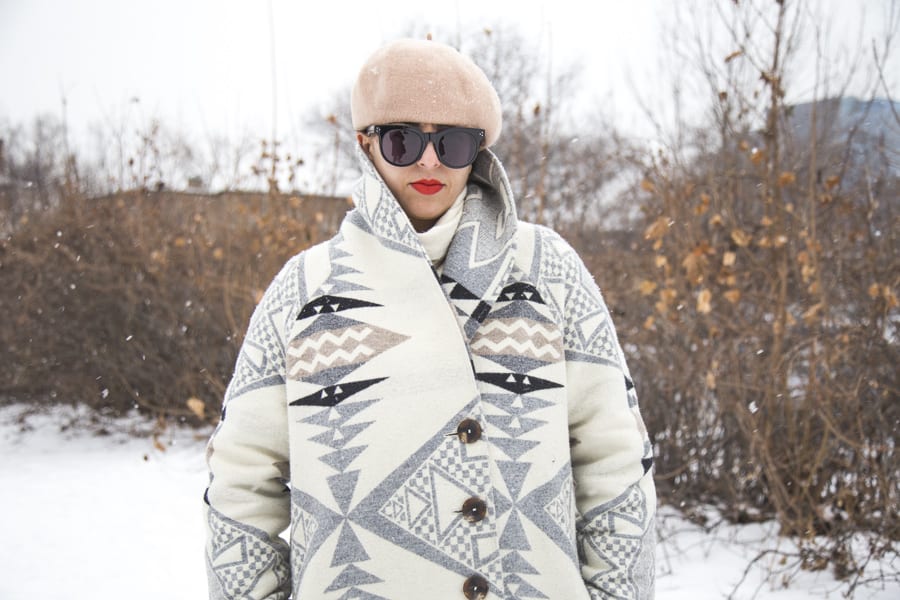 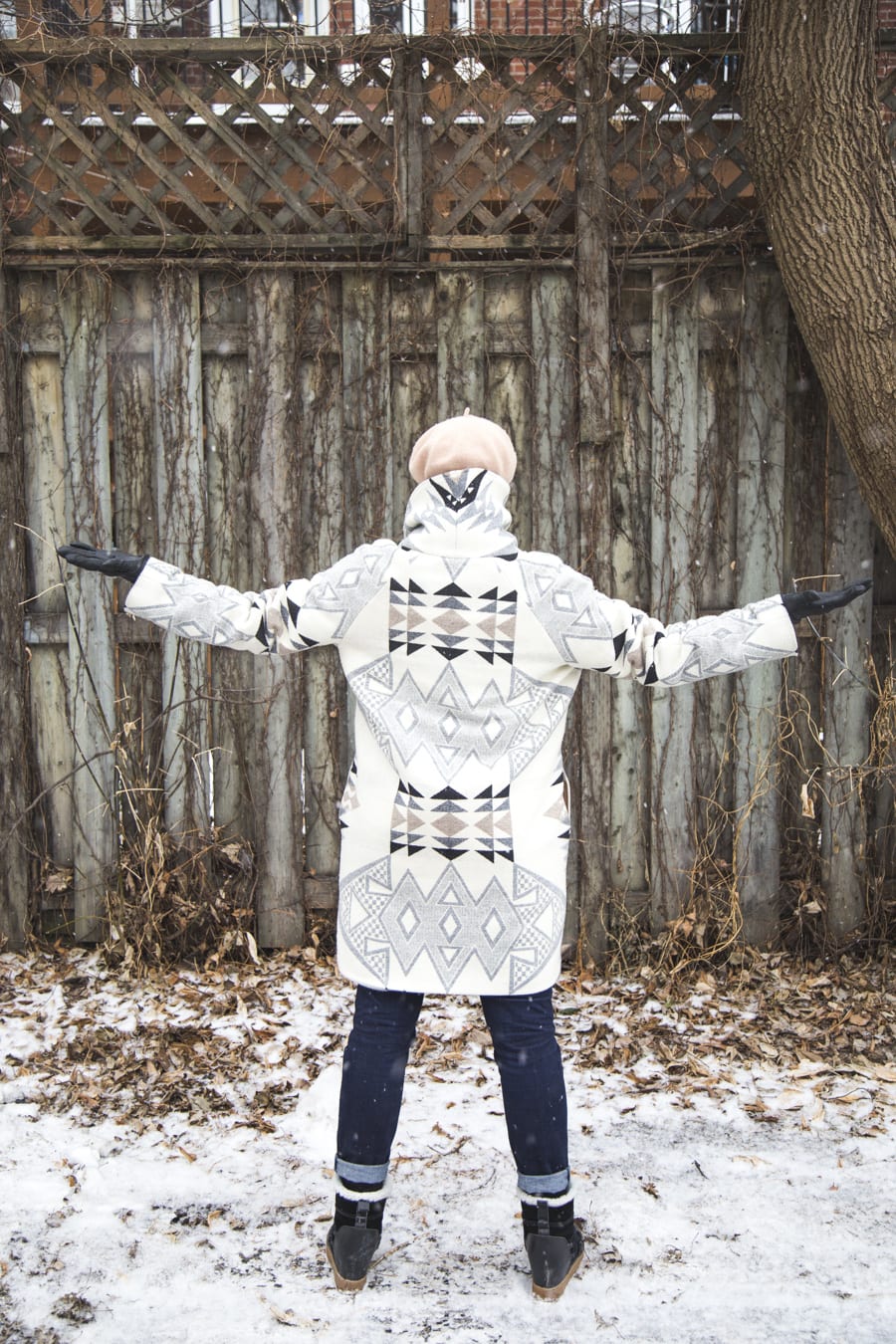 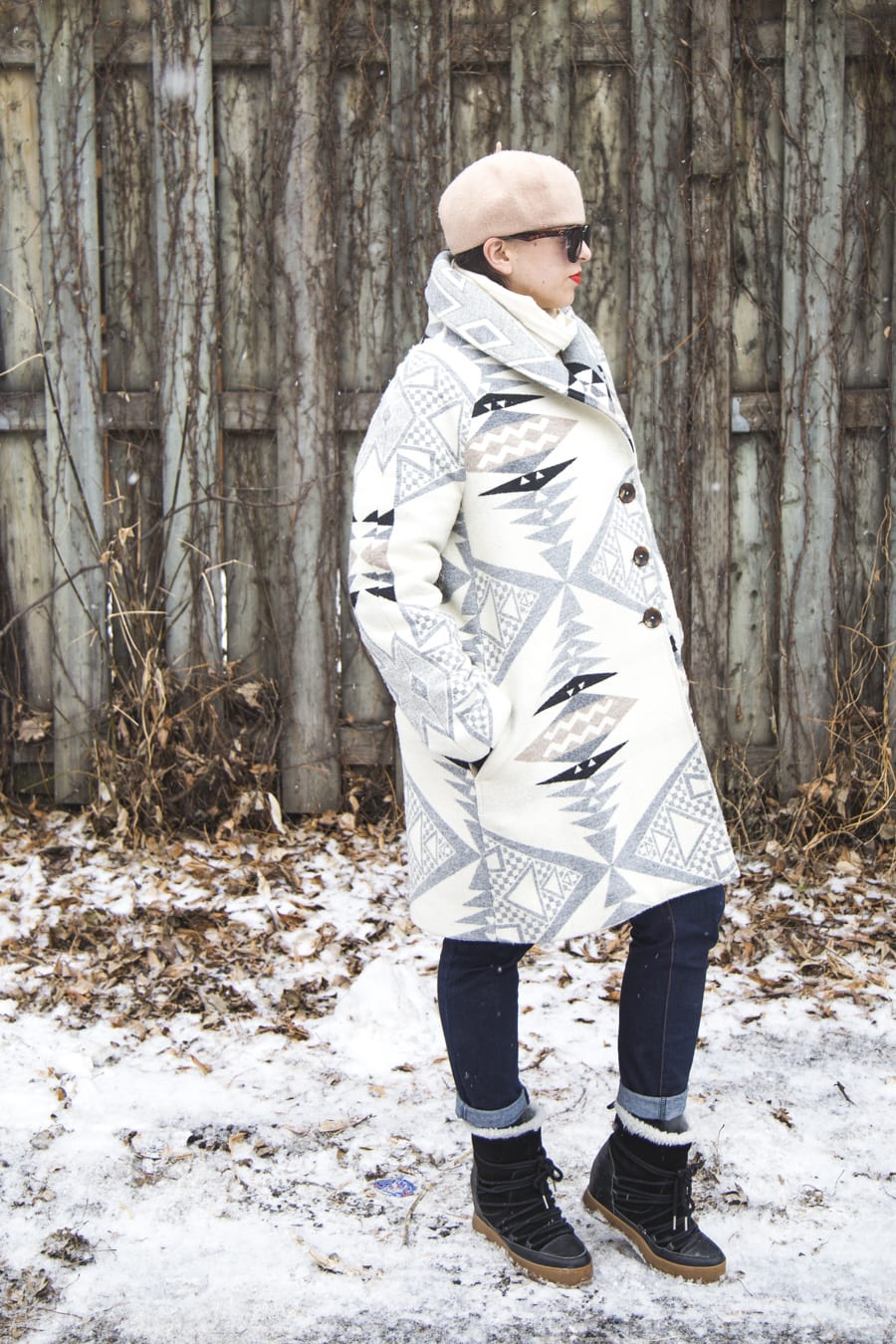 While I love my many Clare Coats, without interlining they just aren’t heavy duty enough to get me through the truly bone chilling -20 days (let alone when it gets to -35 and the entire city has essentially given up on ever leaving the house) and this year I decided to do something about it.

I’ve wanted a Pendleton wool coat ever since I visited their outlet store in Portland a few years ago and got to see these glorious fabrics in the flesh. They have a dense, thick jacquard weave they use to make blankets in the most glorious southwestern patterns. The best part? It’s double sided! The downside: it’s quite pricey. I didn’t buy any wool at the time, but when I was at Fancy Tiger in Denver last year and spotted this geometric cream and grey minx in store, I couldn’t help myself. After whispering “Oh yes she will be mine” to myself for a few years, our time together had finally arrived. Around $90 a yard, it was one of my biggest fabric investments, but thankfully it is quite wide so you don’t need to buy quite as much. Fancy Tiger doesn’t seem to sell it online, but you can get it directly from Pendelton Woolen Mills; the pattern I chose is called Diamond Ridge. Lining wise I went with my old-standby, flannel backed satin. Tonitex in Montreal stocks it in many colours, and I would never make a winter coat without this stuff inside; it’s very thick and sturdy and I’m never worried about the lining wearing out.

The pattern is the Oslo Coat from Tessuti Patterns. I wanted something long with very simple lines, minimal seaming and a wide shawl collar to highlight the spectacular print, and this pattern hit all the marks. I could have hacked our Clare Coat into something similar but I always enjoy Tessuti’s drafts and didn’t feel like doing the extra work. The raglan sleeves were an added bonus, since setting in sleeves with such a beefy fabric would have been a chore. I love how the minimalist cut really celebrates the print, and I had a blast cutting it out and deciding on pattern placement (I may or may not have played around in Photoshop to decide how I wanted to place the dominant motifs, like the true sewing nerd I am). I mirrored everything on each side and centred the dominant diamond pattern down the back. I debated making the grey side the dominant face, but I love winter whites, so instead used the grey side on the facing for a little contrast, and juuust barely squeezed it out of my 2.25 yards. 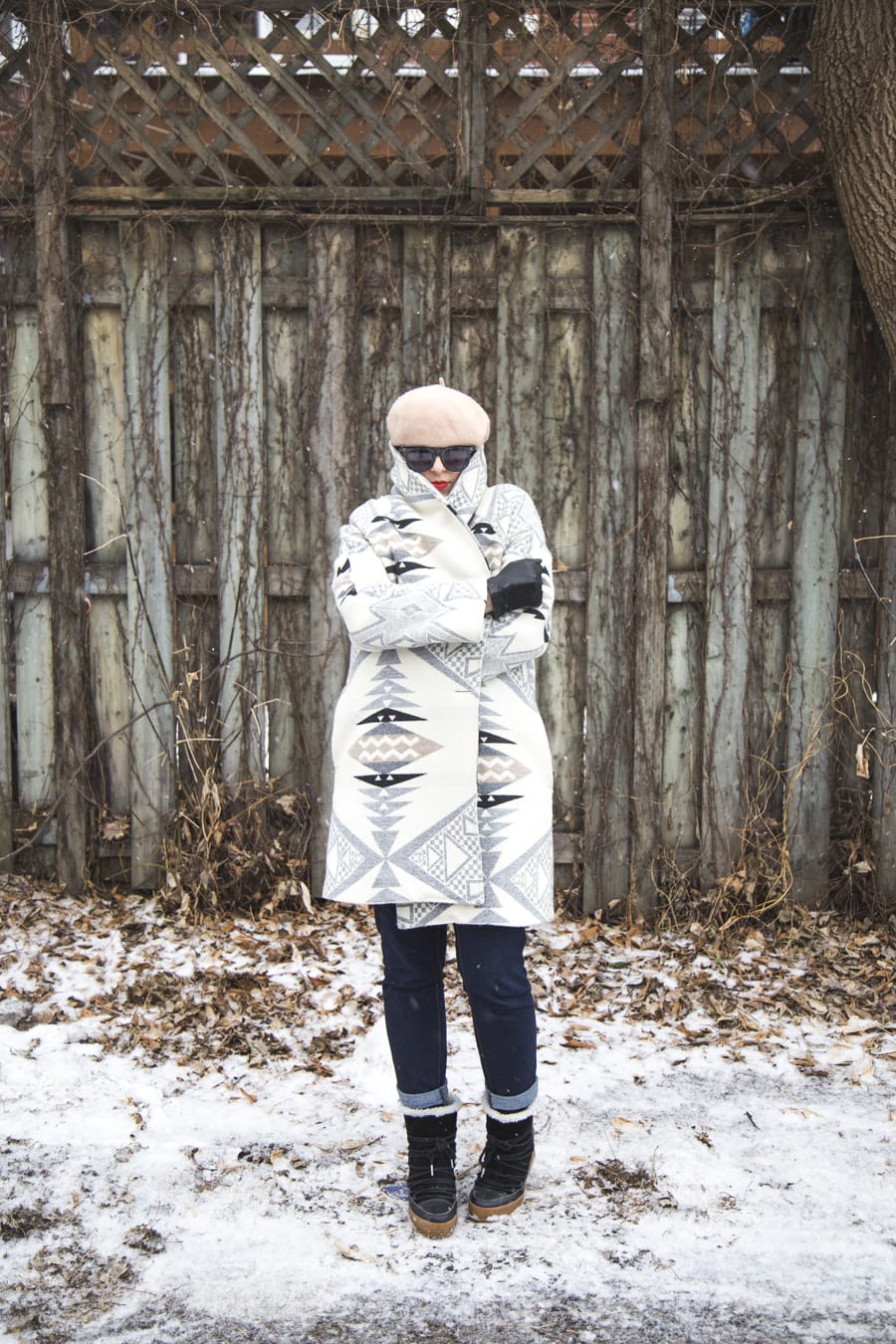 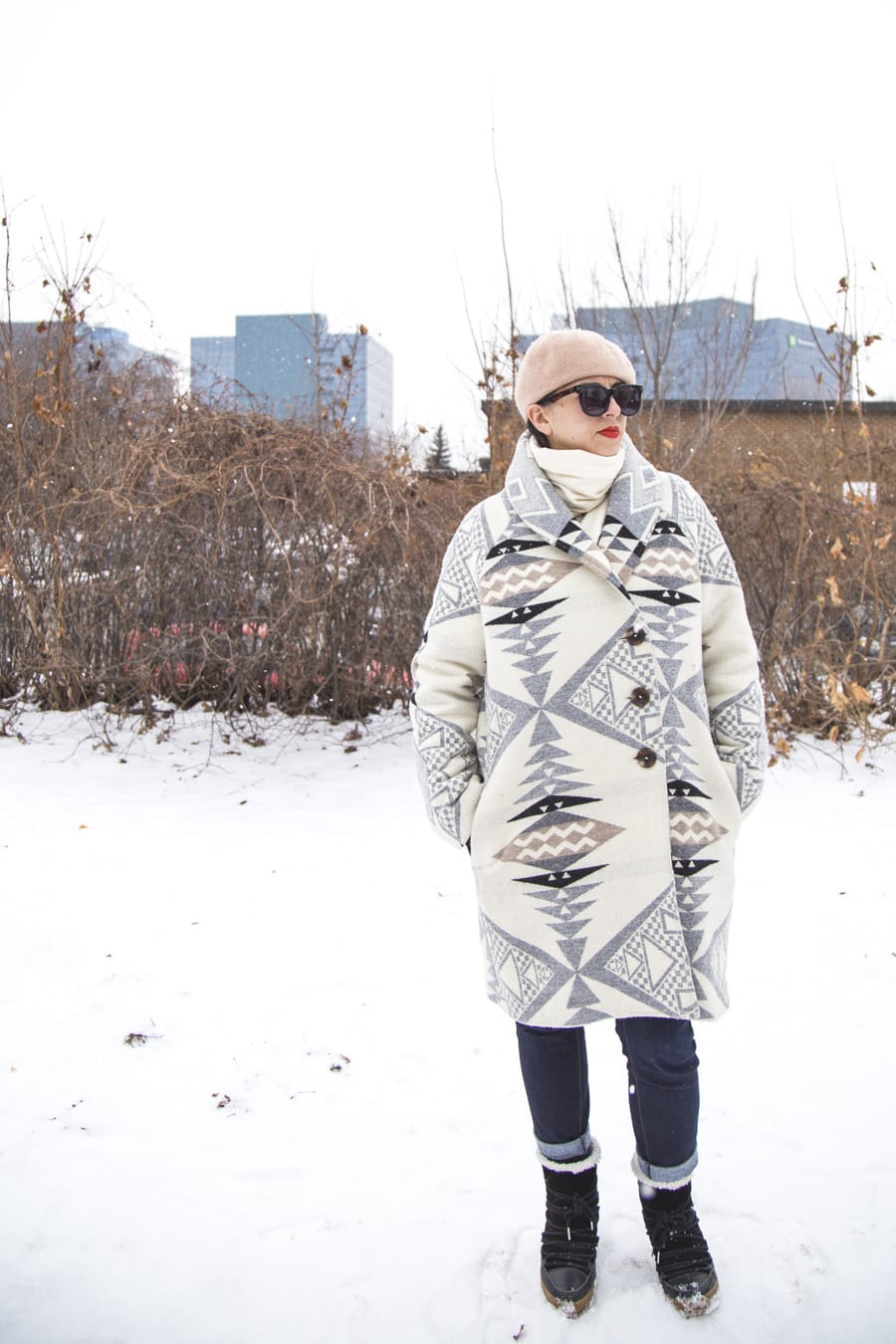 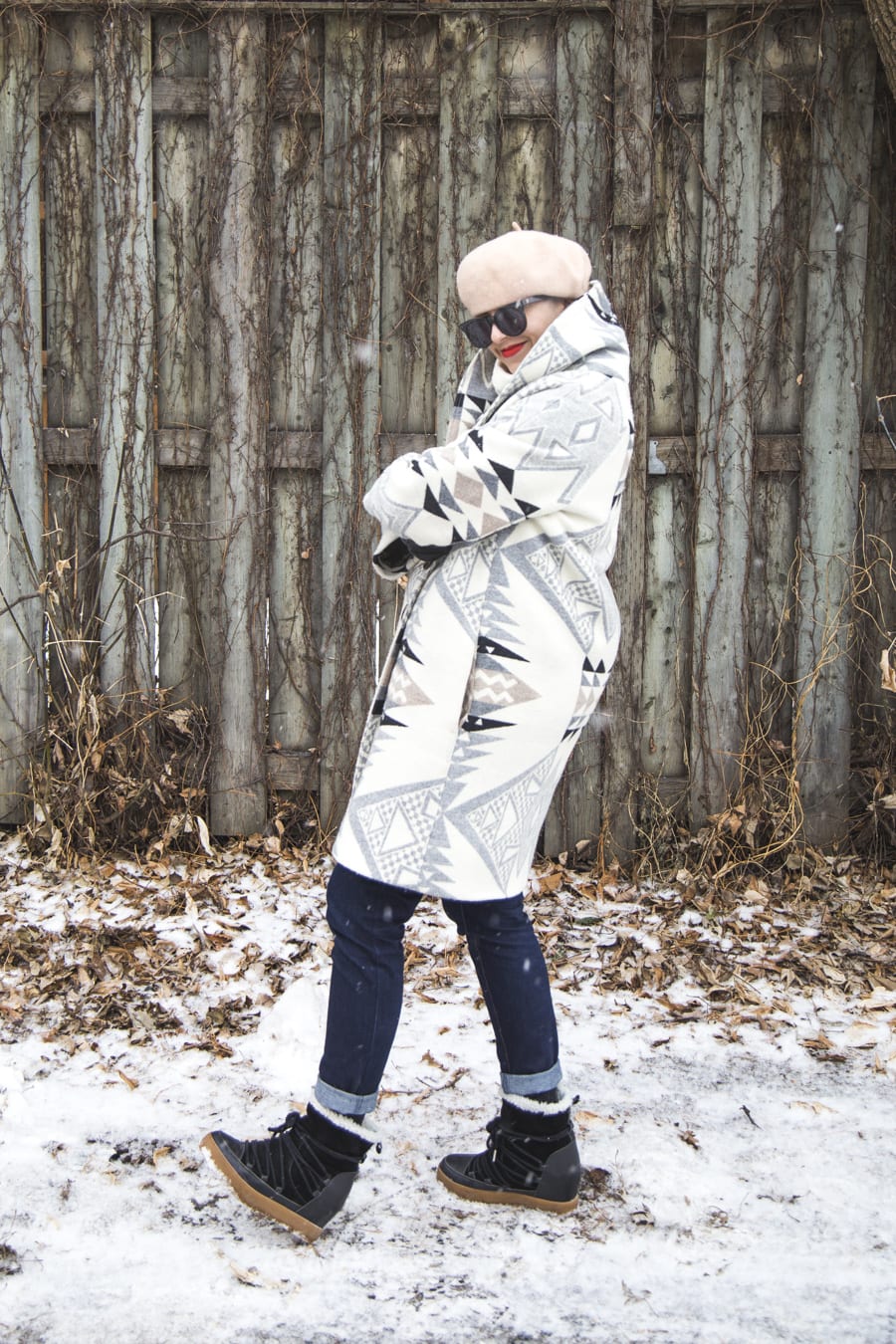 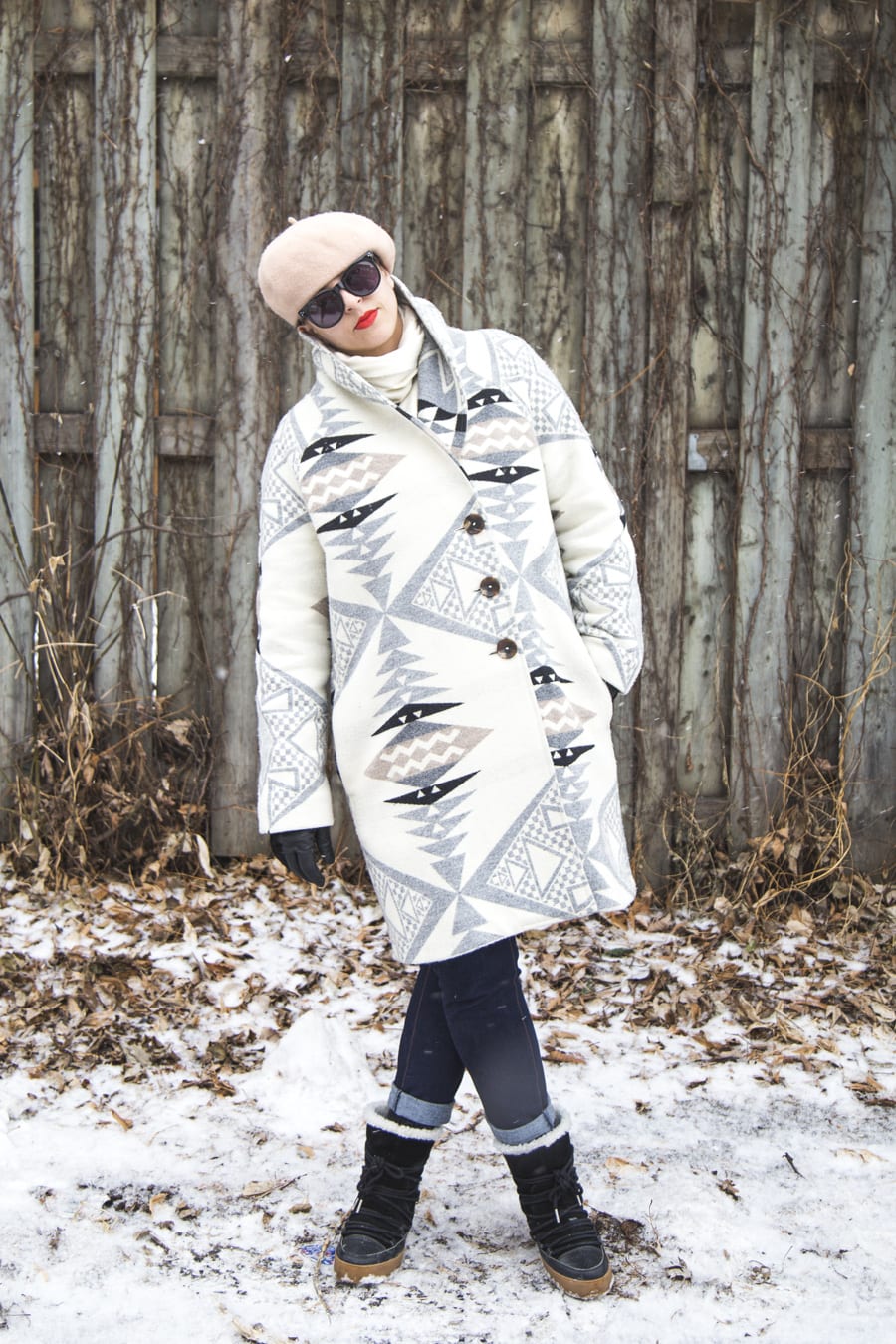 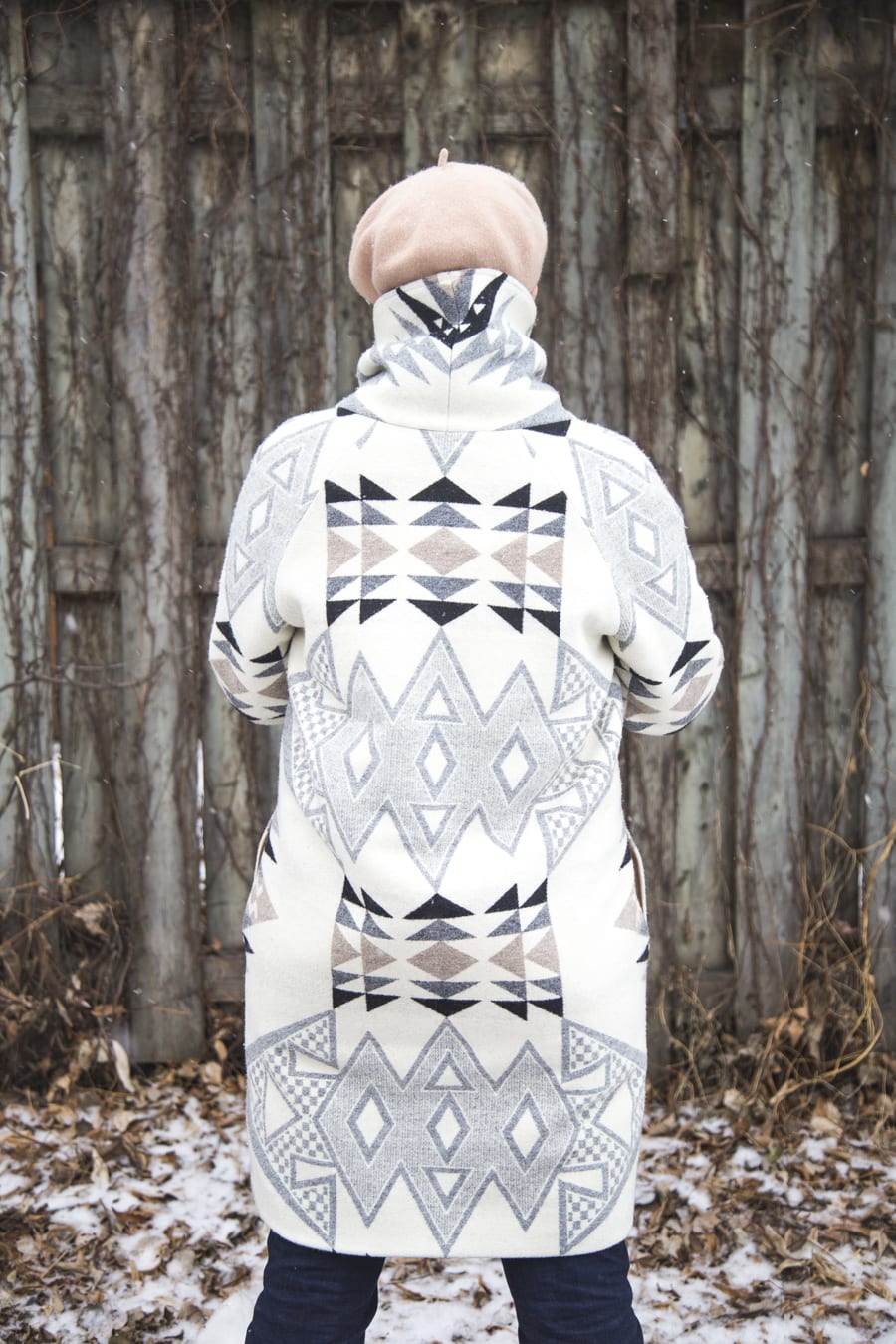 For added warmth, I interlined the lining with Thinsulate given to me by one of our stockists, Club Tissus; leave it to a Quebec fabric store to stock this life-saving stuff. Available in multiple weights (appropriate for temps as cold as -40!) Thinsulate is essentially a polyester batting quilted between two thin fabric layers and while it does add bulk, the added warmth is seriously miraculous (I used the 100gram weight). We have a full post dedicated to interlining coming this week, so I’ll talk more about the interlining process in that post.

Because I was nervous about how bulky the wool would be with the interlining, I went up a size and made a 14. I made a quick muslin to check the fit, and while it is roomy, I like the cozy oversized cocoon-vibe of the whole thing. The pattern came together very easily, although things got a bit chunky when multiple seams interacted. I added three buttons instead of the called for one because a) warmer and b) it’s too much strain on one single button. I used some pretty tortoiseshell buttons I found locally and topstitched along the centre front to keep everything nice and secure. My only beef with the pattern itself is the location of the pockets. I find them a bit low and regret not adding them to the muslin; I would raise them an inch or two if I ever made this again. 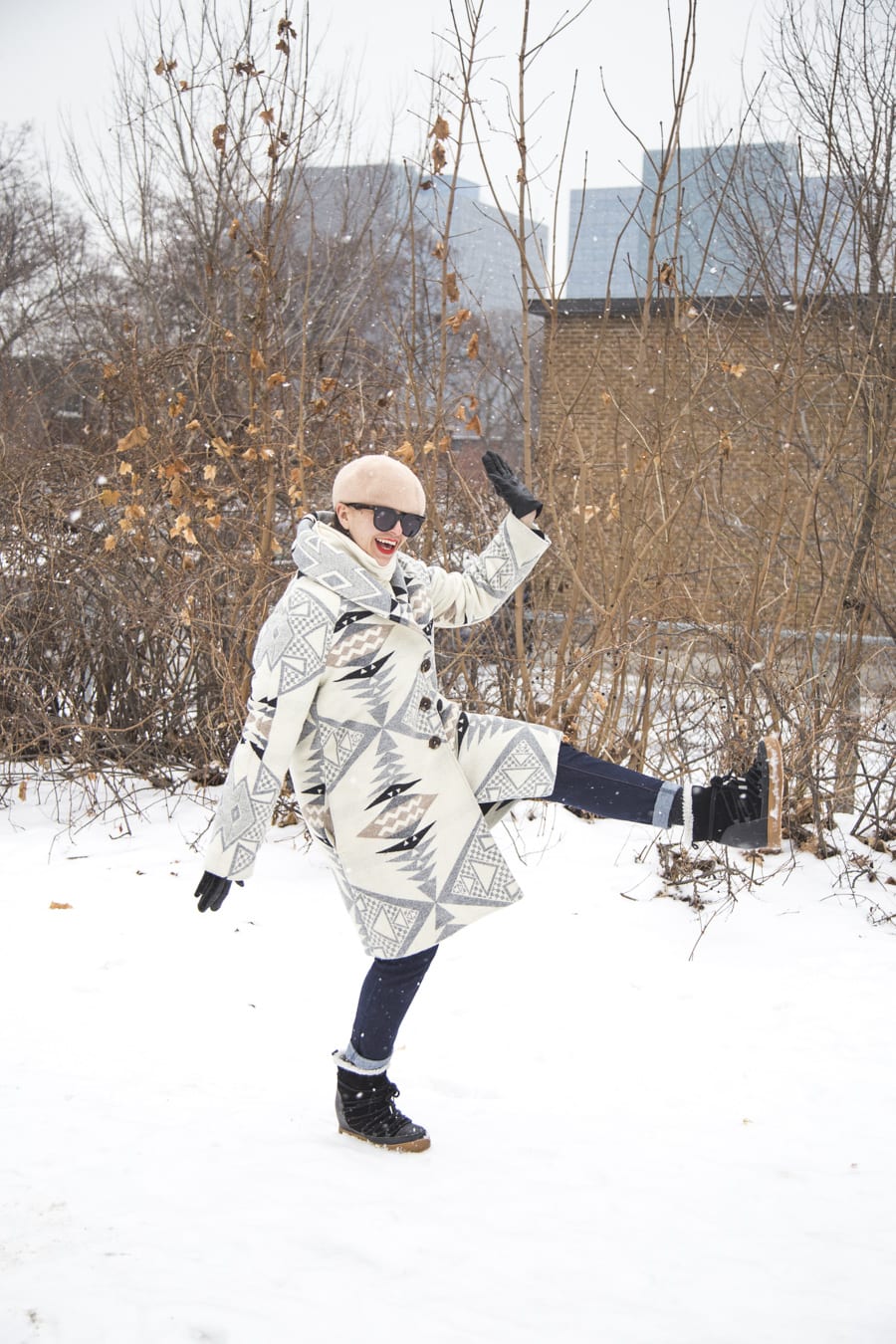 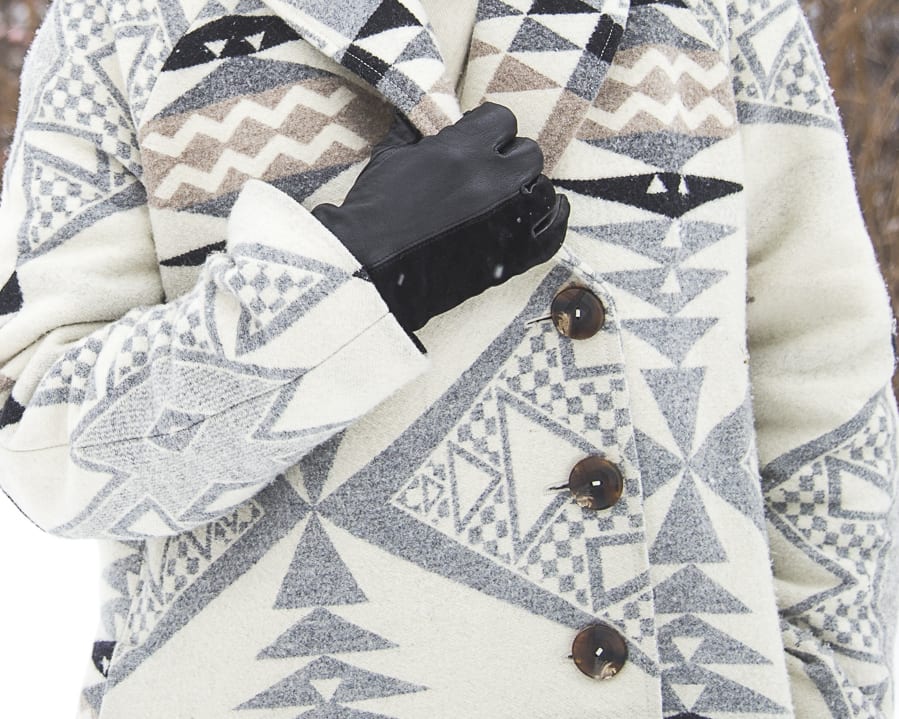 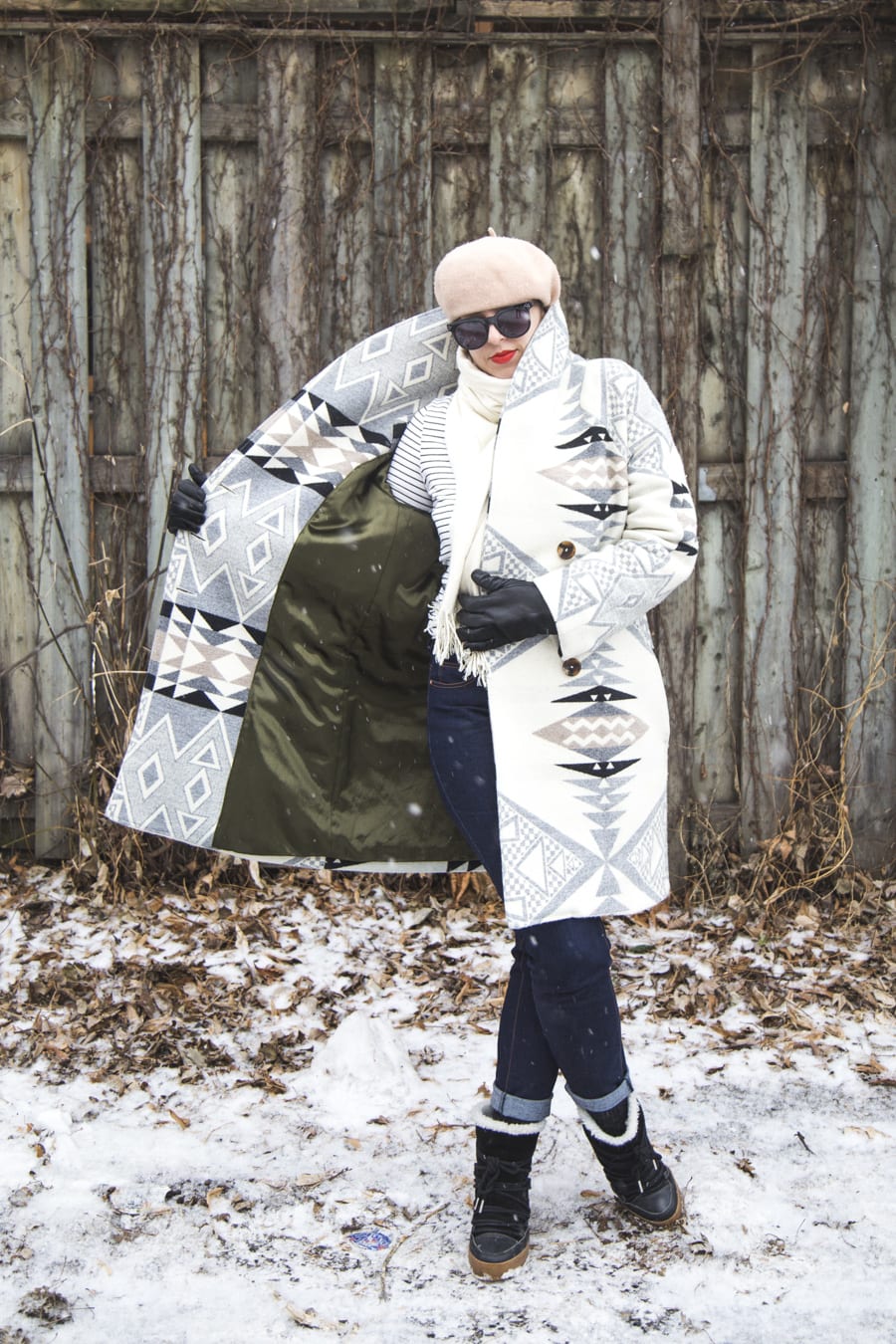 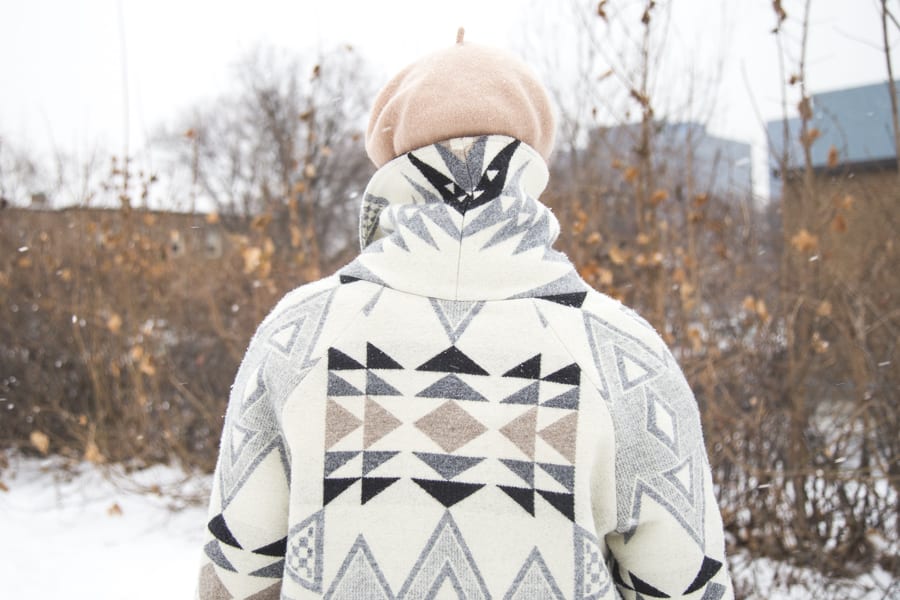 I’ve been wearing it nearly every day, and honest to goodness, I am less winter-sad than I normally am. This coat makes me HAPPY, even at midnight when I have to go take the dogs out for one final pee and it’s so cold outside you want to punch someone. This coat is seriously, seriously warm. The shawl collar is a great feature because I can wear it standing up on really chilly, windy days when I want a bit more coverage around my face. We’re already well into January and I haven’t even pulled my parka out of storage, which I am counting as a major victory. While I am perpetually afraid of spilling coffee on it, so far the cream has stayed creamy, and I get more compliments on it than any garment I’ve made in recent memory. Montrealers know a seriously cozy coat when they see one.

I can’t wait to extoll the virtues of interlining later this week. You too can be snug as a bug in a wool rug! Having a spectaularly dramatic coat (dare I say…. frosting?!) doesn’t need to sacrifice on warmth.

So… what would your dream coat look like? And has anyone else discovered the joy that is Pendleton wool? I can’t wait to find some fun uses for my scraps!

ps. If you’re also trying to survive a cold winter, I’ve discovered a few hacks this year. I invested in this heated blanket for bed and a heated throw for my couch and it’s been kind of life-changing. I hate having the chills (a cheap solution is to put a hot water bottle in bed to warm it up before you get in). I also picked up a tub pillow and tray for my nightly soaks and I feel like a queen every time I get in the bath.

CATEGORIES:
Our Sewing Projects
TAGS:
Coat  Tessuti  Wovens
« Our Favourite Makes of the Year! |How to Make the Warmest Coat Ever: Interlining with Thinsulate »